Review: Wolverine and The X-Men Vol. 3 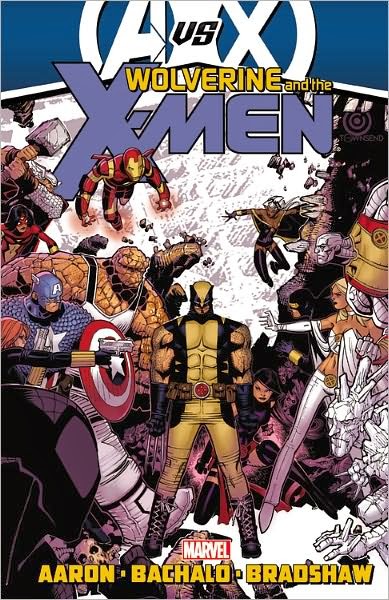 I wonder how much sense the third collection of Jason Aaron, Chris Bachalo, Nick Bradshaw and company's Wolverine and The X-Men series might make if you didn't also read Avengers Vs. X-Men. Or if it makes any sense at all. I rather enjoyed Avengers Vs. X-Men, which I read in one big gulp thanks to some Bible-sized hardcover collection that included the entire series and the spin-off, nothing-but-fights companion series with the ludicrous title of AvX: Versus, and I imagine if one likes Wolverine and The X-Men, one would also like Avengers Vs. X-Men, but the five issue collected herein really depend on a good working knowledge of the series it ties into.

These issues don't comprise a single story arc reflecting the events of Avengers Vs. X-Men, but each issue reflects a particular story beat from the series, so, in essence, these are five somewhat stand alone tie-ins to particular issues or story elements of the event series. And unlike a lot of event series, a lot happened in the pages of Avengers Vs. X-Men, so the status quo the cast of this book is reacting to in various ways changes greatly from issue to issue.

Wolverine is, of course, one of the more conflicted characters in the event's conflict, visually represented by Chris Bachalo's cover, as he's really the only character involved who is both an Avenger and an X-Man simultaneously (Beast also sides with the Avengers), and is the one character among all the heroes who had a pretty huge problem with Cyclops before the conflict even started. He's therefore a fairly big player in that series, and this book checks in with him and a few other characters throughout the tumultuous events of Avengers Vs. X-Men, at one point more-or-less derailing the entire premise of Wolverine and The X-Men (The Jean Grey School's entire staff of X-Men resign en masse to join with Cyclops' team, leaving only Kitty Pryde behind). The volume ends with Cyclops and the rest of "The Phoenix Five" still possessed by the Phoenix Force, so how Aaron rights the monthly series will be interesting to discover in the next volume.

So in the fist issue, Captain America visits the school to tell Beast and Wolverine about the Phoenix Force's imminent arrival on Earth, and to recruit them each for a different mission (Beast goes into space to try and stop the Phoenix, Wolvie joins Cap and the other Avengers to beat-up the X-Men and get likely host Hope away from them).

In the second, Cyclops, Emma Frost and Magick arrive at the school in the aftermath of the Utopia fight to try and recruit Wolverine to the mutant cause; Wolverine refuses, but just about everyone else joins Cyclops.

In the third, X-Men and Avengers are fighting all over the world, while Wolverine is trying to get Hope to the moon to...it's complicated. The pair of them fight an alien death squad, though.

In the fourth, Cyclops, Emma and the others are already empowered by the Phoenix Force, which must have happened between issues of this series, and  Rachel Grey is hunting for Hope (Apparently Rachel, who, as far as I can tell, is character sharing some of the lamer attributes of both Jean Grey and Cable, was some sort of mutant hunter of mutants in the future? Called a "hound"...?),  and there's a big X-Men vs. Avengers fight, in which Wolverine and... regular Kid Gladiator sides with the X-Men to beat up a bunch of Avengers.

And, finally, in the fifth issue, Kid Gladiator's dad, Gladiator, leads Warbird and a bunch of Shi'ar soldiers attack Cyclops and company's base in an all-out assault that goes very, very badly for them. This issue, narrated by Warbird (another Wolverine and... regular) and splitting its attention between the Gladiator vs. Phoenix fight and Warbird's origin story, reveals the bephoenixed X-Men at maybe their most villainous. Cyclops, Colossus and Magick all do some fucked-up shit to their fellow heroes and the world as a whole in the course of Avengers Vs. X-Men, up to and including Cyclops betraying Emma and killing Xavier, but nothing seemed quite so evil to me as the scene in this issue where Colossus and Namor not only defeat Gladiator, but then proceed to savagely hold him down and beat him bloody while Cyclops watches, eventually ordering them to stop when it looks like the near dead—or hell, maybe dead—Gladiator has had enough (The last issue ends with Warbird carrying an unconscious Gladiator into the Jean Grey School; Kitty says to ready the medical bay and Doop has a first aid kit, so I assume he didn't die).

As with previous volumes, Bachalo and Bradshaw split up penciling duties (each of them is inked by four different inkers), with Bachalo drawing three issues and Bradshaw two. As I've said before, both are great artists, and either would be great on the title, but their styles don't mesh well at all, and it's not merely a matter of the different ways they draw.

Bachalo's character designs are so individualized that his Iceman or Wolverine don't really look like the same Iceman and Wolverine that Bradshaw draws, and Bachalo's panels have nor borders, using the generous white space of the page to form gutters around his panels, while Bradshaw's have the traditional black-lined borders.

Their clash doesn't really matter here, as each issue reads like a stand-alone tie-in to a different issue of Avengers Vs. X-Men, but while Wolverine and The X-Men is a consistently good-looking book, it's not a consistent looking book.
Posted by Caleb at 7:18 PM

I only followed the whole AvX stuff thru Andrew Wheeler's CA reviews, and I found this collection pretty easy to follow...

Plus it addressed the whole Rachel Was Phoenix for Like 20 Years at least a little. Which bugged me about the recaps of the cross-over. Like a lot...

I also used Andrew Wheeler's AvX CA reviews to help make sense of this volume of Wolverine and The X-Men. I wonder how common it is nowadays to use Internet recaps to add context when reading books on the periphery of a crossover.