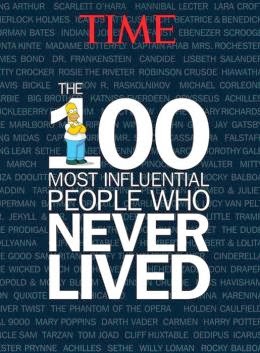 Despite the form it takes, this fleet, 120-page, 2013 hardcover is more a conversation than a book. Assembled and written by Kelly Knauer and Ellen Shapiro—with a dozen or so contributions from celebrities like Jodie Foster, Mary Tyler Moore, Gerard Butler and others—and produced and packaged by the folks at Time, the book is inspired by the magazine's annual list of "The 100 Most Influential People in the World."

Editor Knauer would probably readily admit that the list is meant as a conversation more so than a definitive statement, as part of the process of assembling it involved collecting opinions on Time.com, which lead to nominations and arguments for and against some listees. They did try to keep it from being an argument, though, at least a vehement one, by coming up with guidelines that forbade the inclusion of gods and divinities, and religious figures like Noah, Moses and Job that would place Time in the position of having to declare them real or fictional.

They also gave themselves the rule that the "people" had to actually be people, as in human beings, "which eliminated such beloved characters as Mickey Mouse, Snoopy, Yoda and Frodo Baggins," Knauer writes (Not sure why 2001's robot Hal 9000 gets an entry then, however).

One could, would and probably should find a lot to quibble with in here. Unlike the annual lists, which take a snapshot of who's doing the influencing now, and thus take a stab at zeitgesit-capturing while simultaneously coming with an expiration date, the broad title of this list means they're trying to whittle down the most influential fictional characters of all time, and thus inclusions of the most recent vintage will likely seem especially suspect. Like Hunger Games' Katniss, Mad Men's Don Draper, The Girl With The Dragon Tattoo's Lisbeth Salander, or even The Big Lebowski's The Dude, for example (Wow, Big Lebowski is 15 years old already?).

I saw a page with a few superheroes while flipping through it, which is why I originally brought the book home from the library. I was curious to see how many superheroes, as well as which superheroes, the Time people thought were worthy of inclusion. After having read the book—heavily illustrated and broken into a series of articles about 500 words or so in length, it's a quick read—I realize most of the characters have appeared in comics of some form or another.

Many have been imported into comics from other media, be it literature (Dracula, Doctor Frankenstein, Tarzan), film (Darth Vader, Indiana Jones, James Bond), television (Homer Simpson, Buffy, Captain Kirk and Spock) or, in one instance, video games (Tomb Raider's Lara Croft is the only video game character in the book; is she really more influential than a certain mustachioed plumber, though?). Uncle Sam and Santa Claus are in here as well.

In fact, it would probably be easier to list the characters who I am fairly certain have never appeared in a comic book before than those who have, and hell, I could be wrong about some of those.

As for characters native to comics, there are five of them in the book. Three of them are superheroes, and they are probably the first three you thought of: Superman, Batman and Wonder Woman.

The trio all appear in the section of the book entitled "Outliers" (and not, oddly, "Heroes and Villains"). Actress Lynda Carter pens the article on Wonder Woman, which isn't really a case for Wondy's inclusion so much as a mini-essay on the subject of "What Wonder Woman Means To Me," and the entry fills two pages, with most of one page devoted to a 1977 image of Carter in her television costume.

The Superman and Batman entries are both written by Knauer, and are shorter still, and pretty basic in their observations (I liked the cheesiness of the Superman entry's opening line: "'You don't tug on Superman's cape,' sang Jim Croce, and that's good advice. But Superman's cape tugs at you..."). Her Superman entry makes note of creators Jerry Siegel and Joe Shuster, and that Superman launched not just "a thousand strips," but also "a lot of lawsuits, after the two sold the rights to their creation for a mere $130."

No creators of Batman are mentioned, and the only real person's name attached to the character is that of Tim Burton, in a sentence mentioning some of the most prominent Batman mass media adaptations: "Over the years, Batman has been portrayed on a '60s TV show as a Roy Lichetenstein canvas come to life; as the central figure of a rewarding run of imaginative Tim Burton fantasies; and, most recently, as a relentless, muscle-bound crusader in a freak-show series of action films loaded with violence." (Speaking of arguing, er, conversing, I think "comic book come to life" is a bit more accurate than "Lichtenstein canvas come to life," as the latter was a recontextualization of the former anyway, and I'm not sure just two movies constitutes a "run;" certainly "a pair of imaginative Tim Burton fantasies" works just as well, even if it loses the alliteration).

To illustrate these entries, Time uses a full-page image of the cover of 1939's Superman #1 and a small head shot of Michael Keaton as Batman from the first of the Burton films (Man, the fact that his eyes move but his head doesn't really makes for a super-creepy Batman).

As you guys will notice, these are all DC Comics characters, and among the only superheroes—in fact, I think they are the only superheroes—who have had comics in continuous publication since they were first launched back in the Golden Age (Captain America, The Flash, Green Lantern...those guys all had significant time off from the monthly grind, didn't they?). That may be why they are included and no other heroes are, although I suspect their presence in other, mass media (even if, for Wonder Woman, it was just that one TV show and some cartoon appearances with other DC superheroes), and their general cultural impact were the main reasons. ("Why Robinsons Crusoe and not Lemuel Gulliver? Why Batman and not Spider-Man? Our list reflects our preferences, and it's been a pleasure to put it together," Knauer states in the introduction).

As for the implied DC vs. Marvel thing, I think it likely comes down to the fact that the trio above are perceived as the most iconic of the super-heroes, with Superman being the template for a superhero, and all of the Marvel heroes, even those that pre-date Marvel itself by decades, are the awesome and compelling characters they are because of the way they reflect, tweak or comment on the basic idea of a superhero, as represented by Superman (and Batman and Wonder Woman). The true Marvel characters of the 1960s boom are superheroes with problems or, in other words, more fleshed-out, complex and realistic takes on the sorts of characters DC published before.

I think it is interesting—and I'm sure there are essays, hell, maybe even a book, to be written on the subject—that a handful of characters currently owned and controlled by the company called DC had such a huge cultural impact at such an early time, and for such a long time, and are just now starting to fade in relative prominence, while the Marvel characters are in such a meteoric ascendancy. Is there a reason— what is the reason?—that Superman, Batman and, to a lesser extent, Wonder Woman, were the superheroes of the 20th century, whereas Spider-Man, The X-Men, Captain America and the The Avengers characters are the superheroes of the 21st century? (There were two big-budget, all-star cast films about Thor and three about Iron Man before a Wonder Woman film ever got out of development. Think about that from a broad view; that's really, really weird).

There are only two other comics-born characters in the book/on the list: Charlie Brown and Lucy Van Pelt, who appear in the "Couples" chapter (along with the likes of Dr. Jekyll and Mr. Hyde, Elizabeth Bennet and Mr. Darcy, Romeo and Juliet and the aforementioned Kirk and Spock).

Time's television critic James Poniewozik writes their entry, and it's quite well-written (and includes a derivation of the word "fussbudget," so kudos for that, Poniewozik). He notes the most famous image of the pair together is that of the football kick that never connects, but thinks its a misleading one, as it presents them as enemies more than the friends who need each other that they actually are ("Truth is, Charlie Brown needs a sounding board, and Lucy needs a project"). In Poniewozik's mind, then, the most telling image of the pair is Charlie Brown sitting at Lucy's Psychiatric Help booth, which is, of course, the image used to illustrate the piece, magnified to fill about a third of the page, allowing for a nice look at Charles Schulz's wiggly line-work.
Posted by Caleb at 10:25 PM

Does it make me a terrible cynical person that I simply assume that the choice among super-heroes was driven by the corporate relationship between Time and DC? "Synergy," they would have called it in the 90s. "Cross-promotion," now.

Trivia: aquaman and green arrow were published along with DC's trinity through the gap between golden and silver age. I *think* GA has made continuous appearances since then, including legacy characters, and the save might be true of aquaman

^True, through More Fun and Adventure. The "Trinity" are those who had eponymous titles continuously.

I can't think of regular or "continuous" GA appearances between the end of the Satellite Era JLA (1984) and Longbow Hunters (1987). He showed up in Crisis but wasn't especially prominent.