Have I ever mentioned how glad I am to not be a retailer in the business of pre-buying comics I think I might be able to sell?

See, this is apparently what Marvel is telling folks about the tie-ins to their next big event/crossover series, Original Sin, at least in the solicitations:

The creators, the tag line, the price, the inclusion of a bonus digital editon, variant options and that's it.

As for the actual event series itself? There's not much more detail thre:

I really, really like the trade-dress or cover design or logo integration or whatever you'd call it for Original Sin though (see the image at the top of the post); I'll be curious to see if it extends to the tie-in titles.

As for the rest of Marvel's line in May, for the complete solicitations you can say them in a couple different places. Like this one.

As for what jumped out at me this month... ALL-NEW INVADERS #5
JAMES ROBINSON (W) • STEVE PUGH (A)
Cover by MUKESH SINGH
THE WORLD-SHATTERING CONCLUSION TO “GODS AND SOLDIERS”!!!
• The INVADERS are trapped on a hostile world and under relentless attack from a mind-controlled god.
• Facing a fate worse than defeat, will CAPTAIN AMERICA, NAMOR, THE HUMAN TORCH and WINTER SOLDIER become the means for the KREE EMPIRE to conquer the galaxy?!
• What role does one of the MARVEL UNIVERSE’S most powerful races play in this grand finale?
32 PGS./Rated T+ …$3.99

I don't really get what these guys are doing in outerspace, but they look pretty cool in their space gladiator costumes. Unforutnately, the interiors are by an entirely different artist...


AMAZING SPIDER-MAN #1.1
DAN SLOTT (W) • RAMoN PERéZ (A)
...
YEAR ONE: LEARNING TO CRAWL!
• He sought revenge... and found responsibility. From that night on, a new life began.
• Join Peter Parker as he takes his first steps towards finding his way in the world as Spider-Man.
• The chapter you never knew about the story you know by heart.
• Dan Slott (SPIDER-MAN/HUMAN TORCH) and Ramón Perez (the Eisner winning TALE OF SAND & WOLVERINE AND THE X-MEN) bring you a new & reverent spin on the first 60 days of Spider-Man.
32 PGS./Rated T …$3.99

"The chapter you never knew about the story you know by heart." Oh God. That's a pretty good tag line, but written by someone who should be writing taglines for movies or romance novels rather than Spider-Man reboots.

Ramon Perez is a great get on art. 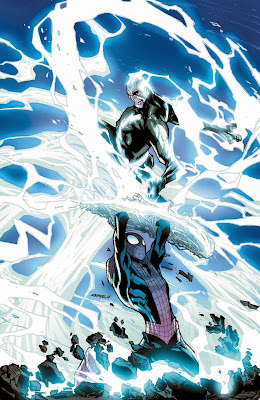 Here's Humberto Ramos' cover for Amazing Spider-Man #2, which is of course published the same month as Amazing Spider-Man #1.1. I'm only highlighting it here to note that they've re-designed comic book Electro to better resemble movie Electro. I was pretty disappointed at the unveiling of movie Electro, as I really would have liked to see that original, silly, star-of-lightning-bolts mask translated into real-life...for the sake of curiosity, if nothing else. 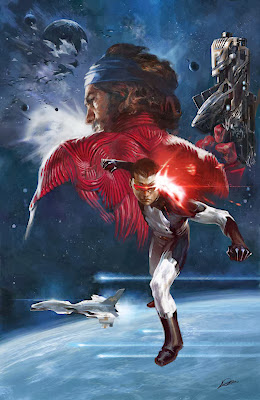 CYCLOPS #1
GREG RUCKA (W) • RUSSELL DAUTERMAN (A)
Cover by ALEXANDER LOZANO
...
Cyclops just discovered that the father he thought died long ago is alive and well and A SPACE PIRATE. Spinning directly out of ALL-NEW X-MEN, comes the first ongoing solo series for one of the time-traveling Original X-Men. After the events of “Trial of Jean Grey”, Scott Summers stays in space to learn some valuable lessons from his dad: 1) How to shave, 2) How to talk to girls, 3) How to steal a Badoon space-ship.
32 PGS./Rated T+ …$3.99

Well this is a completely unexpected book. And premise. And creative team. I wonder how Rucka will manage to turn Cyclops into a hard-drinking, self-loathing, sexy lady lebsian detective in this comic...? 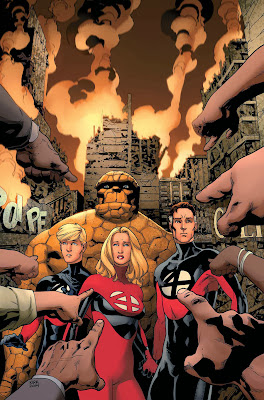 FANTASTIC FOUR #5
JAMES ROBINSON (W)
LEONARD KIRK WITH SPECIAL GUEST ARTISTS (A/C)
...
“THE FALL OF THE FANTASTIC FOUR” PART 5 - Super-Sized issue!
• The Baxter Building is quarantined and shut down!
• The Fantastic Four held accountable for the destruction in Manhattan!
• A major turning point for the team and a dire blow to the family!
• The trial of the century featuring an all-star roster of guest artists!
40 PGS./Rated T+ …$4.99

Now that'sa hell of a solicitation.

Oh how I wish this was a $3 comic, so I wouldn't have to trade-wait it, as I will be with All-New Doop, All-New Ghost Rider, All-New X-Men, Daredevil, Hulk, Silver Surfer and Uncanny X-Men... 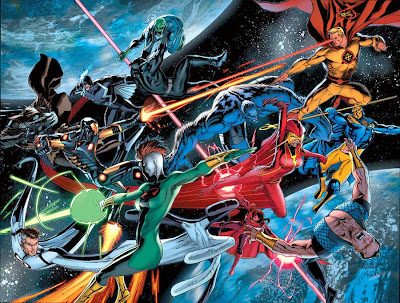 NEW AVENGERS #18
JONATHAN HICKMAN (W) • VALERIO SCHITI (A)
Cover by DUSTIN WEAVER
• In all of creation, only one Earth has successfully met and triumphed over each Incursion that has threatened it: the Earth of the heroes of the Great Society!
• Guess which Earth is on a collision course with ours?
32 PGS./Rated T+ …$3.99

Kick their asses, JLA! Come one Dr. Fate, you can take Dr. Strange! Just headbutt him! Right in the mustache! 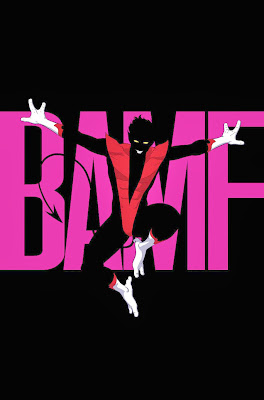 Still not interested in a Chris Claremont-written Nightcrawler comic, despite some curiosity about how his 1970s/80s sensibilities will mesh with the late-'90s visual sensibilities of artist Todd Nauck, but Jamie McKelvie delivers a hell of a cover for the second issue. That's two great covers in a row for this unexpected new series. 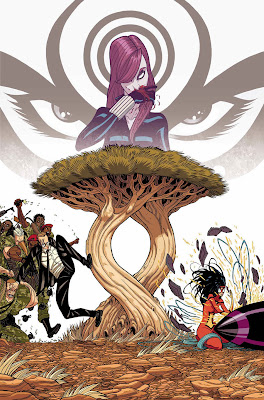 SECRET AVENGERS #3
Ales Kot (W) • Michael Walsh (A)
Cover by TRADD MOORE
Variant cover by RAGS MORALES
“POST-NUCLEAR”
• A post-nuclear warhead has gone missing in the Middle East. Eighteen S.H.I.E.L.D. agents are dead. Who you gonna call?
• What happens when Black Widow and Lady Bullseye meet? Sparkles. And what happens when you get too many sparkles? Explosions, that’s what.
• While Phil Coulson struggles with his new problem, Maria Hill deals with her old one: MODOK is up to something.
32 PGS./Rated T+ …$3.99

Tradd Moore's covers for this series have been consistently awesome-looking, and they really make me want to check out the series....until I see he's just providing the covers, and someone else is actually drawing the interiors. 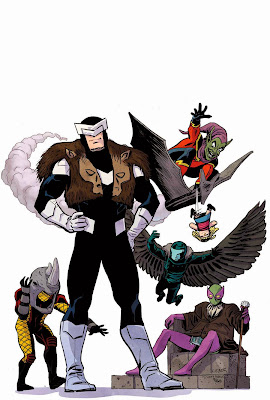 I'm really pissed at this comic for the 33% price increase. I guess it's nice to see that it still hasn't been canceled, although I don't think it's much longer for this world (only in comics is the answer to something selling poorly to start charging dramatically more for it).


THUNDERBOLTS #26
DOUG MOENCH (W)
CHARLES SOULE (W)
PACO DIAZ LUQUE (A/C)
• An ancient cosmic power has corrupted a former ally…
• Can the Thunderbolts take him down before their time’s all up?
• Adventure in the mysterious jungle—as only Marvel can do!
32 PGS./Parental Advisory …$2.99

Doug Moench's name wasn't one I expected to see when I started reading through this month's solicitations. Huh. 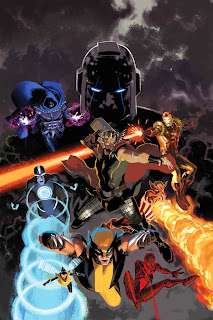 UNCANNY AVENGERS #20
RICK REMENDER (W) • DANIEL ACUNA (A/C)
Artist variant BY GREG LAND
• Unite or die! The Avengers Unity Squad pull it together, but is it too late?
• Which of the seven futures will become dominant? Kang’s ultimate goal revealed!
• The Uncanny Avengers learn that even if you have no other choice, never trust Kang.
32 PGS./Rated T …$3.99

Woah, woah, woah. I just read the second collection of this series, involving Kang and the Apocalypse Twins and the seven futures, and the series is still going to be dealing with that plot in May, twenty issues in? Yikes.
Posted by Caleb at 6:07 PM

Mukesh Singh is an amazing artist, but I don't think he works fast enough to do anything but the occasional cover. Travis Charest Syndrome.
But oh, those covers...

Frankly, it`s great that he just draws the covers. I don`t want him to draw the interiors.

Well, maybe to some one shots.

BAMF on the Nightcrawler cover. Genius.

A few years ago, I would`ve comlained about Cyclops`s daddy going trough such a clichéic change. Now...I`m fairly ok with that, because I understand Superhero-comics better. Still not jumping of joy, though.

Also, it is a surprising premise.

That is spoilered by the solicitation. GOD...

Yeah, I like Uncanny Avengers a lot but this plot is getting a bit long in the tooth.
Speaking of plot fatigue, are you reading The Walking Dead? Holy crap. It's been 18 issues of this same storyline, with at least another 6 to go. And I simply can't tell any of the players apart anymore.

Electro's actually looked like that since before Spider-Man became Superior, so it's not really in response to the new movie coming out.

I can't fathom the extent of the Uncanny Avengers storyline either. I was hoping that the "NOW .1" issue would be a jumping off point, but apparently not...