Review: All-New X-Men Vol. 3: Out of Their Depth 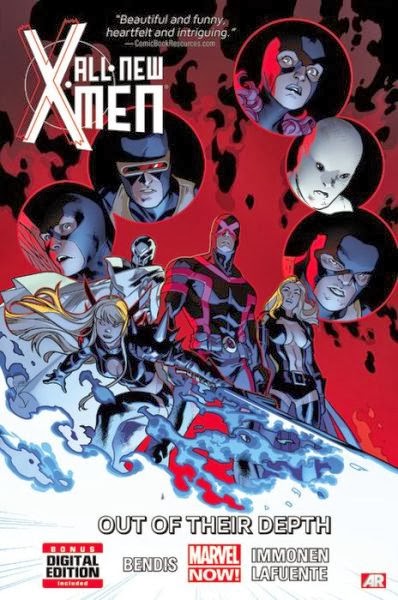 The third volume of Brian Michael Bendis and Stuart Immonen's All-New X-Men, the series dealing with the original, teenage X-Men visiting the present Marvel Universe and refusing to go back until they fix it, opens with the resolution of a particularly manipulative cliffhanger. When Cyclops and his team appear on the lawn of Wolverine's X-Men school and headquarters to pick up anyone who wants to defect to Cyclops school, Emma Frost's protegees The Stepford Cuckoos accepted, as did one of the original five, left unrevealed until the first issue of this volume—It's Angel (although Uncanny X-Men Vol. 2 made that clear anyway).

The first four of the five issues contained in this volume  deal with the events of Angel's defection and its aftermath. This includes some fighting, like a diamond form Emma slugging Wolverine, and some emotional heart-to-hearts about mind-control, as when Kitty tries to comfort a despondent Jean Grey.

These four issues are all penciled by Stuart Immonen and inked by Wade Von Growbadger (who I think may just be the best of the current X-Men art teams, but I don't know; Olivier Coipel and Nick Bradshaw are pretty amazing too).

That story arc also signals the resolution of the Mystique, Sabertooth and Mastermind plot, which has been to rob and rob and rob until they've amassed a small mountain of money in a warehouse, with which Mystique offers to buy Madripoor off of Madame Hydra. Wolverine, Kitty and the new kids are on their trail, culminating in a big-ass fight scene with other players involved, like The Silver Samurai. The good guys naturally win, and at least some of the bad guys are caught...although Mystique escapes SHIELD custody almost immediately. While I'm all for big-ass fight scenes, especially ones drawn by Immonen and including quipping combatants like teen Iceman and teen Beast, the most interesting part of the story arc occurs a little earlier, when the X-Men hear Alex "Havoc" Summers' dumb-ass press conference from Uncanny Avengers Vol. 1, and Kitty replies at length, in a scene that basically amounts to Bendis telling Rick Remender to shut up.

It takes a full page, and follows some commentary from various X-Men, but Bendis, through Kitty, explicitly re-couples the traditional X-Men/mutant metaphor as one that refers, however broadly, to (insert any other persecuted minority of any kind here), having Kitty tell a story from her childhood in which a boy she had a crush on found out he was Jewish. "So, no offense to your brother Scott," she says in summary, "But he sure as hell ain't talking for me."

And, of course, more interesting than that big-ass fight scene is the part during which the "All-New" X-Men meet the Avengers Unity Division from Remender's Uncanny Avengers for the first time. This naturally leads to some fighting—like when Jean picks up the "No more mutants" memory from Scarlet Witch's mind—but, more interestingly, some weird bonding between Alex and Teenage Scott, where the Alex Summers from the present gets to try and reconnect with a past, more pure and uncorrupted version of his estranged brother.

This Avengers team shows up a little later too, in the aftermath of the climactic fight, and I found some of the interactions to be pretty amusing. Bendis does some pretty clever dialogue throughout this volume.

The highlight of this volume, however, is the fifth and final issue in the collection, which reads an awful lot like one of Jeff Parker's issues of X-Men: First Class: It's lighthearted, fun and funny, and features very striking artwork, of a much more cartoony style than any of the other X-artists of the moment, even Bachalo.

It's by David LaFuente, and is one of those quieter, day-in-the-life stories that super-team comics occasionally have between major plot-lines. In this instance, Rachel Grey and the time-travelling, teenage version of the alternate future version of her mom repeatedly, awkwardly bump into one another, Iceman convinces Cyclops to steal Wolverine's Jeep and go into town where they try to make new friends and meet girls at a street fair, and Jean accidentally discovers from adult Beast that teen Beast had a huge crush on her, and, in a scene that is more than a little weird, the two teenagers make out, while holographic versions of variously mutated adult Beasts hang in the air around them, sort of watching. 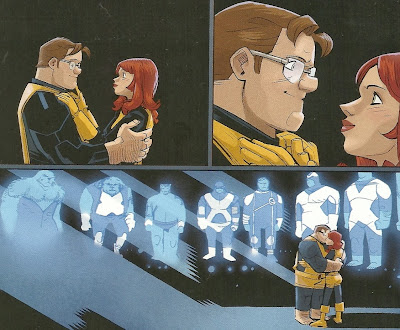 This issue was a lot of fun, and, as always, it was a lot of fun seeing Bendis do humor—this read a bit like some of his better Ultimate Spider-Man writing—and allowing an artist whose style is pretty far afield of the Marvel house style (which exists on a much, much broader spectrum of art styles than the DC house style at the moment).

As for what happens next, it's Battle of The Atom, which I reviewed in brief here.
Posted by Caleb at 8:25 PM

GAHHH! I have to read this after all!

Do you know what you should read? The upcoming GI Joe/Transformers-crossover by Tom Scioli. Have I mentioned it already? Well, can`t be harm in repeating it. In case you`ve forgotten about it.

That's Stu's art on the cover, right? The eyes on his oldschool Iceman are... odd. I like them, but very odd.

Yes, that's Immonen's cover. He looks a bit like a snowman there, with coal or prunes in his head. I prefer the Silver Age design to the current Iceman design, but the one from Spider-Man and his Amazing Friends remains my favorite Iceman design.

@Caleb: What, you didn't like the 90s-era Xtreme 2ndary mutation spikeback Bobby Drake?