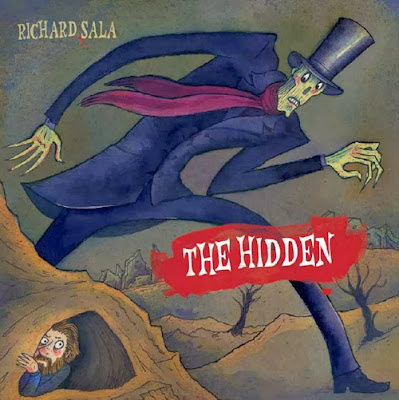 Richard Sala's graphic novel The Hidden bears perhaps the best title imaginable, although it is one that obscures the subject matter, and the immortal, public domain characters at its center, two of the most prevalent and influential characters from one of the greatest piece of horror fiction and one of the earliest science-fiction novels, predating that term by years and years and years.

Those characters are hidden from the reader in the title of the book (despite their appearance on the cover, rendered in such a Salaean manner as to be unrecognizable from their more popular, Golden Age Hollywood-inspired designs), and are, in fact, hidden from the reader throughout much of the story as it unfolds: One in plain sight, the other behind the scenes, only revealing himself as the story reaches its climax.

It's hard to talk about the comic without revealing that which is hidden, and I'm reluctant to do so, as the surprise is one of the book's many charms. I'd suggest if you have any interest in Richard Sala's work (and it's hard for me to imagine a comics reader who wouldn't), or in radical new takes—visual as well as narrative—on old horror story standards, you stop reading this blog post and make to your nearest library, comic shop, book store, Fangagraphics.com or online book seller and do what you can to get your hands on this 2011 book. 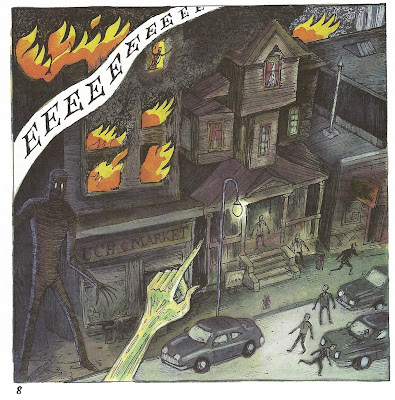 Without spoiling anything, here's what I can tell you. It's a 134-page, full-color graphic novel, written, drawn and lettered by Sala, all in his very distinctive style (There's no mistaking a panel of a Sala comic for a panel of anyone else's comic). It's generally square in format, with many pages featuring only one big drawing, and the others a few panels per page.

It opens with a young college professor awakening from a nightmare to see his small town being torn apart by giant men-shaped creatures, tall enough to peer into second story windows and to grip the young, voluptuous women Sala excels at drawing in one hand, each with stiched-up, mask-like faces. He knew this would happen, and flees.

He awakens in a cave after a rather vivid nightmare... 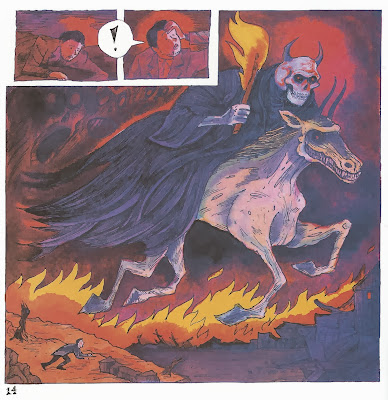 ...and he now has a long gray beard, as if he slept a sleep similar to Rip Van Winkle. A young couple finds him and tells him that their car stopped and they've been walking, seeking to survive in a new world with no electricity and no communication. It's your basic end-of-the-world narrative, but unlike most of those in comics, film and TV these days, this one isn't zombie oriented.

Their group picks up more survivors, a pair of caterers that witnessed what seems like the cabal of powerful people behind this end-of-the-world scenario, although their leader mentions a behind-the-scenes partner.

Finally, the amnesiac, now-bearded professor leads them to a compound of an old associate, and goes to confront the hidden monster behind the mysterious goings-ons.

And that's as much as I can tell you without spoiling anything.

Sala unravels the reveal gently, with first the name of the professor (Victor), the colleague's rambling, long-winded recounting of their discoveries of how to extend life and reanimate the dead, through the application of electricity to the brain and the combination of body parts from different cadavers.

And, finally, Victor meets his "son," a gigantic—at least 15-feet tall—rotten-faced but well-dressed ghoul with a bizarre way of talking. "So—he it is—finally come to be in the presence of myself, since so many years," the monster greats his maker, "Hiding in always time—this was unsuitable, he it is." 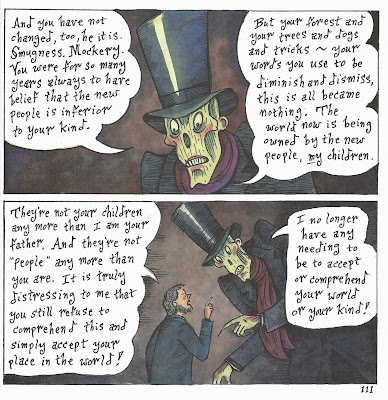 So yeah, this is a Frankenstein story. The professor is the same one who created the monster we generally refer to as Frankenstein (and someone somewhere will always point out is technically called Frankenstein's monster). The giant, doll-like men and, presumably, the other strange monsters lurking around his hideaway that Colleen takes a hatchet to, are the creations of the monster; while it has no soul, no real humanity, it's driven to create others like himself, just as his creator created him.

These are his "new men," and unborn life is the only kind they'll tolerate. They sick to wipe out the old men (and, especially, it seems, the old women) and start over, the media moguls and powerful politicians the caterers saw gloating over the end of the world being mere pawns.

It's not the most intricately plotted of Sala's comics, but it is probably his grandest and most epic in terms of scale, and it's full of suspense, mystery, horror, violence and a perhaps surprising amount of action—at the climax, Victor and Colleen fight off a horde of new men with a hatchet and grenades. 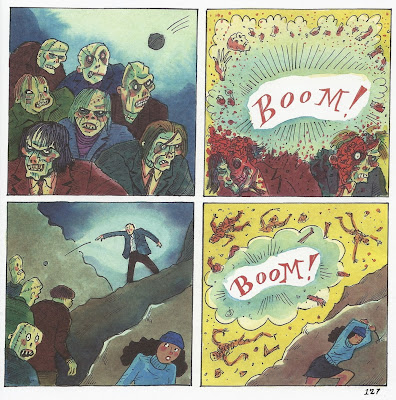 It's also maybe the most-Hollywood ready of Sala's works. While there's generally an old-school Universal monster movie feel to much of his work, with the occasional dab of Hammer Studios aesthetic, this book seems the mostly easily made into a modern movie—maybe not of the big, dumb, would-be blockbuster movie sort (like, say, I,Frankenstein), but a smaller, more clever and stylistic film.
Posted by Caleb at 6:03 PM