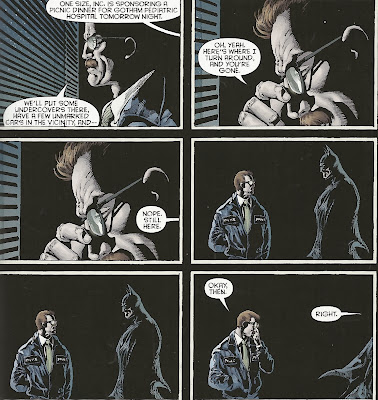 So hey, what did you guys do this afternoon? I spent, oh, a few hours writing an incredibly long post about Batman: The Dark Knight Vol. 3: Mad by Gregg Hurwitz, Ethan Van Sciver and Szymon Kudranski. It was in a list format, discussing the several positives (like the scene above) and many, many negatives of the storyline, its conception and execution. I had actually started it Friday night, by re-reading the collection and taking some notes, and then spent this afternoon filling in the list with paragraphs of commentary, including a few digressive mini-essays about some of the issues raised by the story.

I saved repeatedly, but I guess there was some broken HTML in there somewhere, and I told myself I'd find it before posting—I didn't think that was enough to block saving, but apparently so. Anyway, I then spent a little more time scanning images, and broke for dinner. When I tried opening NPR in another window for company while I cooked, the computer completely froze and I had to forcibly close my browser. "Are you sure you want to do this?" the computer asked, "You will lose any unsaved changes." But since I had been saving my changes, I figured I'd be okay.

A few hours later, dinner cooked and eaten, part of a Godzilla movie watched while I digested and my over-heated laptop having spent some time cooling off, I returned to the computer in order to insert the images and post the piece when, to my horror, I discovered the last three-fourths of it were lost. Then I spent another 45 minutes of my day trying to figure out a way to recover it, but I was completely stumped and could find no answers on the Internet or through the "help" areas. It wasn't in my history and blogger, so far as I can tell, doesn't save drafts the way some other blogging whatchacallthems do (I've idiotically, accidentally erased pieces I wrote for Robot 6 and Good Comics For Kids in the past, for example, but been able to find previous drafts, minimizing the re-writing needed).

Now, I could have re-written the post. I still had my notes, after all, part of it was saved, and, having just written it, I remembered the gist of what I was trying to say. In fact, if I rewrote it now, it would more likely than not be a better post, as I would have actually written a second draft of it, which is something I never do (As you can probably tell from the less-than-sterling quality of the writing). But I've already wasted, let's see, the majority of one entire Saturday on talking about a mediocre comic book for a few thousand words, and don't really want to spend/waste any more of my life on it.

So this is basically just a post explaining why there's not a bigger, better post here in its place.

Sorry! But trust me, I'm much more irritated about it than anyone else could possibly be.
Posted by Caleb at 7:14 PM

Note: the following will not restore your lost article this time. It will however give this post a certain poignancy by making it the last time you ever suffer the problem:

When you're using Firefox or Chrome, there is a plugin you can install called Lazarus. It adds an item to your right-click menu in every text area: "Recover Text". You can be typing away, close the browser, switch off the computer, or otherwise erase your work, and when you restart and go back to the text area (now blank) where you were typing, you click Recover Text and it call comes back. It basically monitors every change to a text area and saves it in a database which it can then use to retrieve not only the latest version but also quite a few earlier ones. I recommend it highly.

Well that's incredibly annoying. On the bright side, that is a rather amusing scan however.

"irritated" isn't even close to the word I would use, I'd be straight-up livid. Losing writing is a brutal, heart-wrenching feeling, and I feel for you, man.

Thanks; I'd be pretty livid under certain circumstances, but luckily it was just a blog post--albeit a long one I spent an afternoon on--rather than something important (i.e. something I was getting paid for, or something I invested longer than an afternoon on).

I've decided I'd just re-write it at some point, and am just doing a paragraph here and there, so I suppose a reconstructed, not-as-good version will appear on EDILW sometime this month or so.