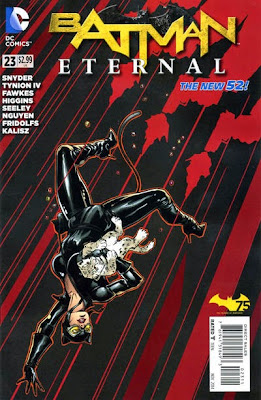 Batman Eternal #23 (DC Comics) Well, here's one DC Comics title that isn't being subsumed by Futures End at all this month...

This issue is a Dustin Nguyen and Derek Fridolfs drawn one which is, of course, another way of saying it's a particularly good issue. As if the cast introduced so far wasn't enough to convince a reader that Scott Snyder, James Tynion and their three collaborators on the writing team were aiming for some kind of greatest hits type Batman story, blending villains and elements from past crossover event stories, this issue involves a massive earthquake and talk of declaring martial law in Gotham City, just to remind one of "Cataclysm" and "No Man's Land," I imagine.

As for the events of this issue, it opens with two particularly vile Gotham City criminals engaged in particularly vile acts who come into conflict; the Ibanescu family is involved in dogfighting, and are about to introduce a snow leopard cub into the ring when dealer-in-endangered species Tiger Shark enters to shoot up the joint. Catwoman tries and fails to save the cub.

Meanwhile, Batman beats up The Architect, the villain behind The Architect quotes Aristotle, and Catwoman takes a meeting with her father, who tries to talk her into becoming the queenpin of Gotham crime. She refuses, but that sure seems like a foregone conclusion, given the "flash-forward" issue of Batman and the upcoming solicitations for Catwoman we've seen. 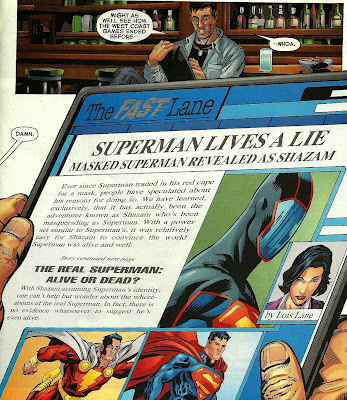 The New 52: Futures End #20 (DC) This issue is mildly interesting simply because of how poorly it lines up with Worlds' Finest: Futures End #1. Both tell a similar story: Power Girl fights Deathstroke and Fifty Sue on Cadmus Island, but they are opposite from one another in almost all other ways, including the costume Power Girl's wearing, Power Girl's hairstyle, what Deathstoke's wearing, who starts the fight and, importantly, whether or not Power Girl is being mind-controlled via an implant Brother Eye has hijacked.

In his column, Tom Bondurant made the case that Worlds' Finest must have taken place a few issues before this week's issue of Futures End, but there's nothing in either issue to indicate that is the case (both just say they are set "Five Years From Now"), but I don't know; Power Girl was shown in a cell (with her shorter hair and the "boob window" costume) way back in Futures End #9, so either that was an art mistake or...I don't know, all of Worlds' Finest: Futures End #1 was a mistake...?

In other events in this issue, drawn by pencil artist Scott Eaton and inkers Drew Geraci and Dan Green, Batman Beyond finally pulls off that heist he's been planning for, like, 20 issues now, a cosmic entity tells Ray Palmer he must form a new iteration of StormWatch and Lois Lane decides to run her story about the real identity of the masked Superman.

I really liked how awful the article is, in the simple terms of a piece of news-writing. One of the weird conceits of the DC Universe has always been that Lois Lane and Clark Kent are supposedly really great reporters and writers, and yet whenever a sample of one of their stories shows up in a comic, it is generally a piece of shit.

You'll note that there's no evidence given in the lede to her big bombshell story, and there actually isn't any evidence, as she personally is the only one who knows that Captain Marvel Shazam has been masquerading as Superman, and none of the others who do know—Shazam, Stormguard—would confirm that to her. 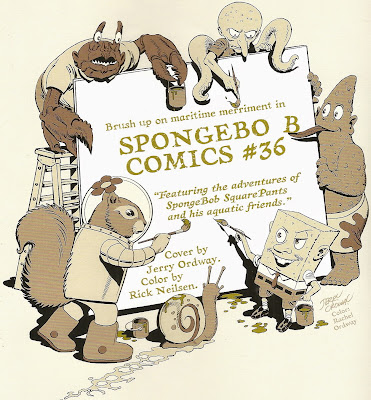 SpongeBob Comics #36 (United Plankton Pictures) Behold! The cast of SpongeBob, as rendered realistically by Jerry Ordway. Sandy looks rather darling, but everyone else looks pretty horrifying, don't they...?

This issue features the epic conclusion of the epic Derek Drymon/Jerry Ordway five-part serialized story, the first multi-part story in SpongeBob Comics history. Who won the first battle between Mermaid Man and the Esperanto-speaking Viro Reganto becomes immaterial when the retirement home they share is attacked by an old villain of theirs. Luckily, through the Power of Friendship, they are able to regain their youth and powers, defeat the badguy, and fix up the place...one side-effect being that SpongeBob and Patrick get caught up in the Power of Friendship, and they too are transformed into realistic Ordway drawings, rather than their usual cartoon style.

This issue is also notable for the presence of Tony Millionaire, illustrating a four-panel gag strip by Joey Weiser. I can't recall Millionaire appearing in these pages before, which actually seems quite odd, given how perfectly suited he is to the "nautical nonsense" that is such a big part of the IP's appeal.

Rounding it out are the usual contributions from James Kochalka, plus strips by David DeGrand (that one actually made me laugh out loud), David Lewman and Vice DePorter and Travis Nichols.
Posted by Caleb at 8:37 PM