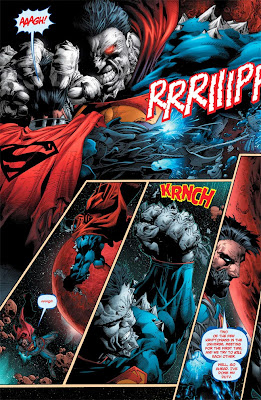 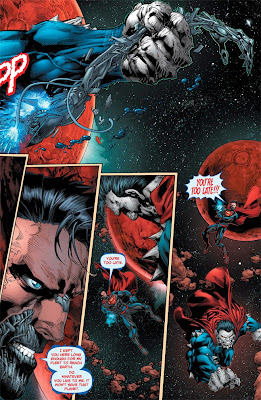 Well, it was either an extremely slow month for dismemberments, or I just didn't read any of the right comics, because the above image is the only image of an arm being cut or torn off of a character in a DC comic that I personally encountered in August.

As you can probably figure out, those two pages were part of a facing spread, and so the arm-ripping-off ran horizontally along the top of a two-page spread, and was thus bigger than my scanner. If you're wondering what the heck is happening in it, that's the Doomsday-possessed Superman (who I think they're calling "Superdoom," at least in the branding on the covers) ripping the left robot arm off of The Cyborg Superman.

This occurred in Superman/Wonder Woman Annual #1, which was written by Charles Soule. I couldn't tell you who drew the image, as there are five pencil artists and five inkers all credited; I'm pretty sure that Benes pencilled the above pages, but that's as close as I can narrow it down.

As to what's really going on, like, more specifically than Superdoom ripping off Cyborg Superman's arm, man, I don't know how to even begin explaining this crazy-ass plot.

Remember (if you are an old, like me, or if you have read the collections) when Doomsday first appeared and fought Superman to their deaths? (And by deaths I of course mean "deaths.") Remember how Doomsday was originally conceived as basically just The Hulk, but they gave him some bone spikes and a terrible haircut to differentiate him from The Hulk? Well, this current Superman crossover story, engulfing the whole Superman line except for the Geoff Johns/John Romita Jr. book, is going further with the Doomsday-is-basically-just-the-Hulk thing, positing a take where Superman is to Bruce Banner as Doomsday is to The Hulk. It's pretty dumb. But, on the plus side...