So, who's this Captain Marvel character...? 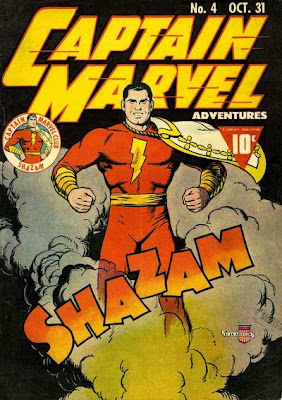 Captain Marvel was a Golden Age caped strongman-style superhero created in 1939 by C.C. Beck and Bill Parker and published by Fawcett Comics. One of—and at times the—best-selling comic book heroes of the 1940s, he seemed at first blush to be a pretty straightforward Superman rip-off—especially if one only looked at the covers of comic books featuring the two heroes rather than reading the stories about them under those covers. The two characters were actually quite different, however, and even engaged in a sort of creative cross-pollination, with Marvel Family characters like Mary Marvel inspiring Superman Family characters like Supergirl.

Fawcett published various Captain Marvel and Marvel Family comics until 1953, when they folded as a comics publishing concern (in part because DC was suing them for copyright infringement). Captain Marvel was also the name of a short-lived Silver Age character who appeared in a short-lived series from short-lived publisher M.F. Enterprises, appearing in four issues in 1966-1967. This one was an alien android with the power to separate his body parts to act independently. 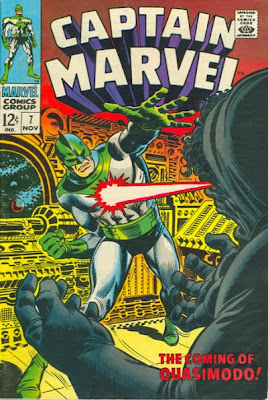 Captain Marvel was also the name of a superhero created by Stan Lee and Gene Colan for Marvel Comics in late 1967; an alien military officer from the Kree Empire, his real name was Mar-Vell. 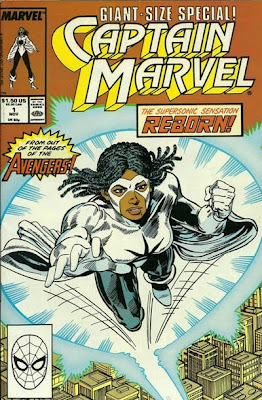 Then Marvel's Captain Marvel died of cancer, and the name Captain Marvel was adopted by Monica Rambeau, who had different powers and was unrelated to her predecessor in any way other than her code name. 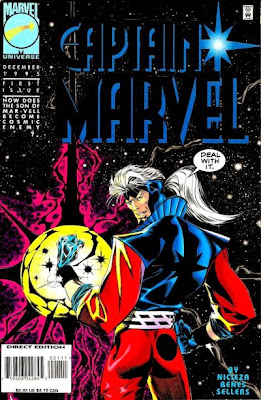 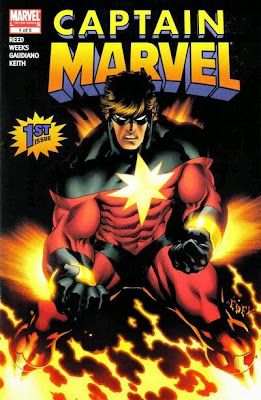 The name then goes on to Captain Marvel V, actually a Skrull sleeper agent who thinks he's the original Marvel Captain Marvel. He dies.

Next up is Marvel Boy II Noh-Varr, who briefly took the name Captain Marvel and a modified version of the original's original costume, before changing his name to The Protector, leaving the name Captain Marvel up for grabs again, until it was claimed by Carol "Ms. Marvel" Danvers, a one-time (original) Captain Marvel supporting character who gained Cpatain Marvel-like powers through an energy fusion of Kree DNA back in 1969. 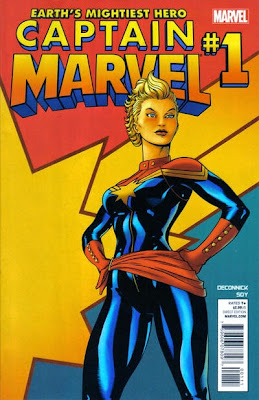 In 2012, she dropped the "Ms" and became Marvel's seventh character named Captain Marvel.

While Marvel's Captain Marvelss were engaged in a decades' long game of hot potato with the name, DC Comics assumed ownership of the original Fawcett Captain Marvel in the early '90s, and published a variety of books featuring that particular family of characters, none of which ever had the name "Captain Marvel" in the title, although he kept the name within the comics themselves.

And that's why Marvel Studios will never make a Captain Marvel movie. Because when anyone hears the name, they think of at least two or three different characters.

But then, I assumed Fin Fang Foom would have been the first Lee/Kirby monster to appear in a major motion picture, but Groot was part of the Guardians of The Galaxy ensemble and is now a fucking household name, so hey, what do I know...? 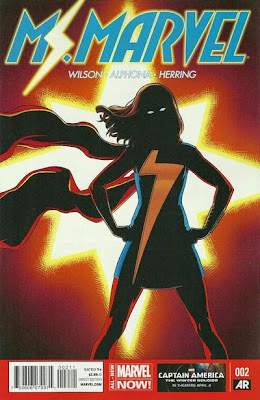 Discussing female superhero movies with a friend the other day, the Carol Danvers problem came up. In addition to how nebulous and polluted the name "Captain Marvel" is, I think it unlikely that Marvel Studios would make a movie featuring a character with the name of the studio in her name. It just sounds weird  to my ear, Marvel's Captain Marvel.

She noted that a more interesting movie would be one starring the current Ms. Marvel, Kamala Khan, and while I think Ms. Marvel sounds just as off as Captain Marvel for the title of a Marvel Studios movie and assume there's still that Carol Danvers/Captain Marvel problem (as Kamala takes that codename because Danvers was her hero, and Danvers abandoned "Ms. Marvel" for "Captain Marvel," as discussed above), she rightly noted they could just de-couple Danvers and Kamala Khan for the purpose of the movie, and then the only name problem is the fact that Marvel's Ms. Marvel sounds goofy to me.

Of course, Marvel Studios seems to have some difficulty making a superhero movie that doesn't star a buff, white, blonde guy named "Chris," so I suppose the chances of them making a movie about a character who is a Muslim, Pakistani-American teenage girl are pretty slim, no matter what her name is.
Posted by Caleb at 8:07 PM

I enjoyed reading this summation of the various renditions of characters named "Captain Marvel". I was amazed at the obscure "self dismembering" Captain Marvel and loved that you had an image of the cover. It's hard to imagine that, as you say, C.C.Beck's version eclipsed Superman for a few years. Chip Kidd, graphic designer and comics enthusiast, co-wrote an excellent book that gives a glimpse of the huge impact of Captain Marvel on popular culture in the 40s. It also gives fascinating detailed accounts of the lawsuit DC brought against Fawcett and how they won their case: Shazam! : the golden age of the world's mightiest mortal. I read a copy from my local library. I always enjoy your posts.