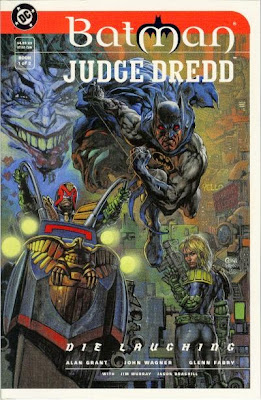 The fourth and final of the Batman/Judge Dredd pairings, and the climax of DC Comics and 2000 AD's 2012 collection of those stories, was 1998's Die Laughing, which was, appropriately, the biggest of the four stories. Not just in scale—featuring as it did The Joker teaming up with Judge Death and the other Dark Judges to slaughter 10,000 trapped civilians—but also in size. While the first three Batman/Dredd books that John Wagner and Alan Grant wrote were single-issue affairs, Die Laughing ran for 90 pages spread across two issues.

Like two-thirds of the previous outtings, this one was fully painted, featuring art by Glenn Fabry, Jim Murray and Jason Brashill, and the narrative included scenes in both Gotham City and Mega-City One, and villains and characters from both Batman and Dredd's regular milieus.

Die Laughing opens with a five-page sequence set in Gotham. Fabry's red-eyed Batman has tracked down The Joker, who is outfitted in a green suit and matching fedora, both covered in a pattern of red lips (not his best suit, honestly). The Joker has just gotten his hands on the Dimension Jump Belt from 1991's Judgement on Gotham crossover, and he uses it to escape from Batman.

But something goes wrong. The belt malfunction sends The Joker's intangible spirit to Mega-City One, leaving his now all-gray, semi-lifeless body in Gotham. That will prove rather important to the story.

Meanwhile, in Mega-City One, there are two big news stories dominating the airwaves. One is that the huge, 10,000-strong "Seventh Day Hedonists" cult is preparing to seal its members eternally in "The Megasphere," where they plan to spend the rest of their days in their hedonistic pursuits, completely separated from the outside world.

The other is that Mega-City One's judges are preparing to transfer the evil, incorporeal beings known as The Dark Judges—Judge Death from Judgement, and his fellows Judge Fear, Judge Fire and Judge Mortis—to a special, hidden tomb where they will never be heard from again. They are eacb encased in "glasseen crystals," which are promptly stolen by a new master criminal on the scene: 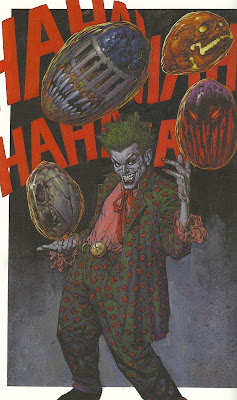 The Dark Judges are freed, and they strike a deal with The Joker: He provides them with new bodies, and they will make him immortal, although the manner of his immortality isn't quite what he had in mind, as he becomes the fifth Dark Judge, Judge Joker. 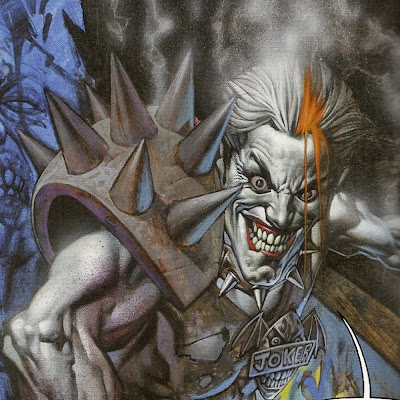 Their wicked plan involves having Judge Mortis possess Chief Judge Herriman and ordering the arrest of first Judge Anderson (who is, remember, capable of finding and capturing the Dark Judges in her own brain, at least temporarily) and, later, Dredd. Anderson manages to escapes to Gotham City in order to find the expert in defeating The Joker.

Some exposition and fight scenes later, and the stage is set for a big action scene, as Batman and Dredd ride those massive Lawgiver motorcycles to the Megasphere, where the Dark Judges plan to seal themselves in with the Hedonists, who they can kill at their leisure, free of all interference from the law. 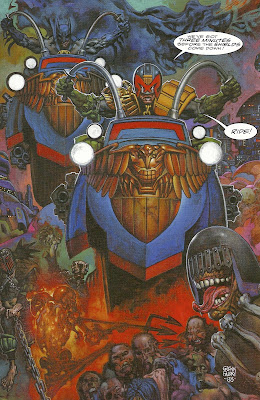 The entire second half of the story is specifically designed to be completely over-the-top, with completely insane visuals that make Judge Dredd and Batman look like the most normal and vanilla of elements in the story.

Each of the Dark Judges has a striking appearance and manner of killing. We've already met Judge Death, of course. Judge Fear wears a special helmet which disguises his true face, so horrible it scares those who look upon it to death: 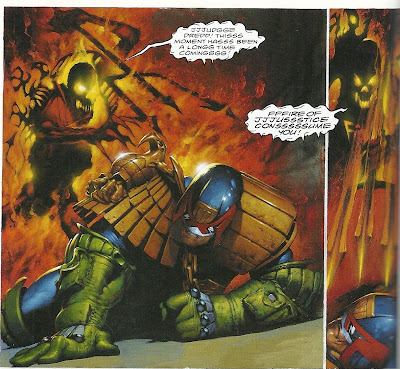 Judge Mortis has steer's skull for a head, and kills via corruption; one of the running visual gags in the book is the way his infection of Judge Herriman causes his host to gradually rot until he's practically falling apart: 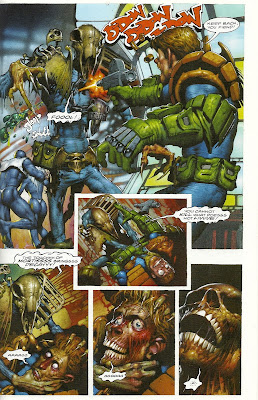 And as for the new Judge Joker? 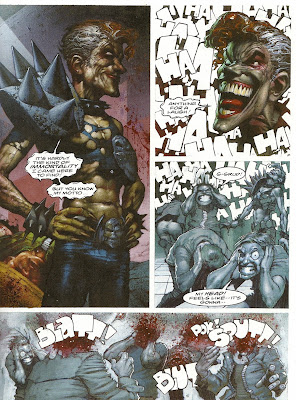 The sound of his laugh can now cause heads to explode.

Batman and Dredd must race through the Megasphere—filled with strange rooms to cater to bizarre fetishes and hobbies that make for wild set-pieces, and peopled by cartoonish characters in all manner of strange costumes—destroying the Dark Judges' host bodies and capturing their spirits in different, inventive and, occasionally, slightly silly ways.

As for Judge Joker, Dredd blasts his host body to pieces until The Joker's spirit jumps ship...landing bak in his own body, already strapped to a chair in Arkham Asylum.

As with all superhero crossovers then, Die Laughing featured incredibly high stakes, but ended pretty much where it began, with nothing really changing...unless you count Dredd and Batman hating one another less then they did during their first meeting as change.

In terms of highlighting particular aspects of each of the stars and their home comics, and fitting them together in interesting ways, this turned out to be a really rather perfect crossover story. The fact that Grant and Wagner spent literally years building up to it, with the story calling back to both Judgement and Vendetta in Gotham, only made it more so. It's easy to imagine that, with some tinkering, this could have served as the only Batman/Dredd crossover story, and served rather well.

But the fact that Grant and Wagner gradually introduced the threats, with one Dark Judge proving a challenge in the first story, and that menace multiplied by five in this one, and gradually built up a relationship between the two title characters and (to a lesser extent, Batman and Anderson) really helped get this one over as a big story with a real sense of occasion.

It therefore almost seems too bad that the collection keeps going after Die Laughing ends.

As previously noted, The Batman/Judge Dredd Collection includes not only all four Batman/Judge Dredd stories, but also 1995 one-shot Lobo/Judge Dredd: Psycho-Bikers Vs. The Mutants From Hell, which does not feature Batman, but does feature another Grant and Wagner-written Dredd story in which the Judge meets a character from Batman's home universe. 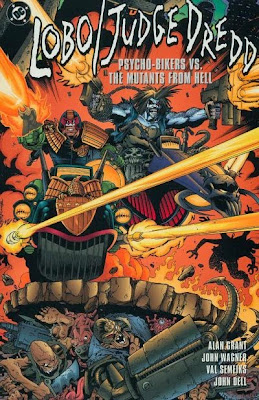 It is not very good, but then, Lobo comics are a pretty acquired taste. A dumb, ultra-violent space-biker/bounty hunter, my favorite stories featuring the character have been the ones that find their humor in making fun of the character, and/or feature the work of artists I like quite a bit, like Doug Mahnke, Simon Bisley, Kevin O'Neill or even Vince Giarrano.

I like the work Val Semeiks, who pencils this story, quite a bit too, and his pencils look great under John Dell's inks, but, eh, this isn't really my kind of thing, and probably isn't helped any by coming after four far superior stories.

The mutant's brother is trying to acquire a pair of special rings that give him incredible powers, with which he hopes to start a mutant revolution. Lobo ends up fighting them alongside Mean Machine and Dredd.

There's a lot of shooting and fighting and, when all is said and done, Dredd and the less-bad bad guys win.

There's not much to it, but Semeiks draws a mean Mean Machine... 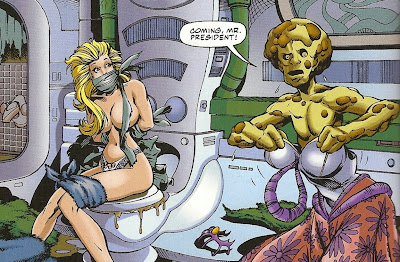 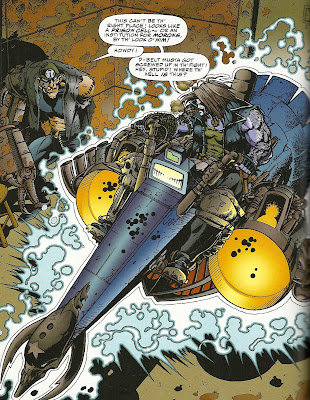 ...which actually looks space-worthy.
Posted by Caleb at 8:28 PM