With her own Astro City analog, Orca, The Whale Woman has finally arrived

I'm not sure how much writer Kurt Busiek, artist Brent Anderson and character designer and cover artist Alex Ross would agree with me, given how reductionist it likely sounds, but the trio's on-again, off-again superhero series Astro City is more-or-less powered by its inspiration from other, older superhero comics, particularly those of DC and Marvel Comics.

As Busiek and Ross did with their seminal Marvel series, the stories quite often focus on superhero characters from the civilian sidelines, teasing out problems and solutions to real-world considerations of genre elements, and comments on aspects of comic book superheroes—and heroic fiction in general. It does so, in large part, by first building a world that is much like the one that likely existed in the creators' imaginations when they were children and young men, a sort of amalgated universe where DC, Marvel, Charlton and Hollywood heroes all share the same space.

Since they don't own the rights to any of these characters, however, they fill Astro City with analogs, some much more direct than others: The Samaritan is Superman, The Confessor and Altar Boy are Batman and Robin, The Gentleman is Captain Marvel, The First Family is The Fantastic Four and so on (Often with key, imaginative differences, sure, but, for the point of this post, I just want to focus on the fact that Astro City is populated with analog versions of some the most popular superhero characters of all time).

The latest iteration of Astro City is being published under DC's Vertigo imprint, and its latest collection was Astro City: Winged Victory, starring the Wonder Woman analog named in the sub-title. It also features a new villain in a minor role: Maneater!

She is one of several female supervillains, including Warmaiden and Jagged Jill, who tell the media that Winged Victory paid them to fight her and take dives, which is all part of a very elaborate, collection-long conspiracy to discredit and destroy Winged Victory.

In the back of the book, we're shown a sketch of Maneater:

And we also get to see some of the design notes:


Maneater is a black woman with a shark-like fin, gray shark-type skin and pointy teeth; she wears something that looks like a surfer's wetsuit, patterned like an orca.

Like an orca, huh...? Aha! Now I know why Maneater looked so familiar! 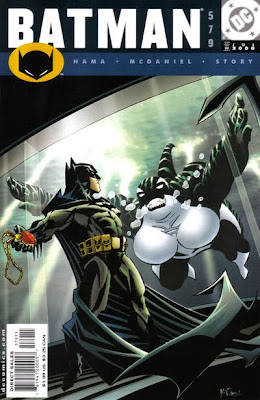 She looks so much like Orca, The Whale Woman, a minor (very minor) Batman villain introduced by Larry Hama and Scott McDaniel in 2000's Batman #579-#581, during a particularly fruitful and well-organized period for the Batman line of books (At the time, each of the several Batman books had a very distinct tone and style, and dealt with a highlighted, isolated aspect of the character: Hama and McDaniels' Batman book dealt with Batman as superhero).

If you missed that story arc, or her subsequent cameos, here's the deal with Orca: Dr. Grace Balin (Balin! Like baleen! Get it?!) was a marine biologist and social activist whose spine was paralyzed in an accident that cost her the use of her legs. Just as Dr. Kirk Langstrom looked to bats in his development a serum to combat deafness and Dr. Kurt Connors looked to lizards in his development of a serum to help people re-grow lost limbs, Balin develops a serum that can restore her spine, but with the expected side effect of turning her into a half-human, half-animal monster. 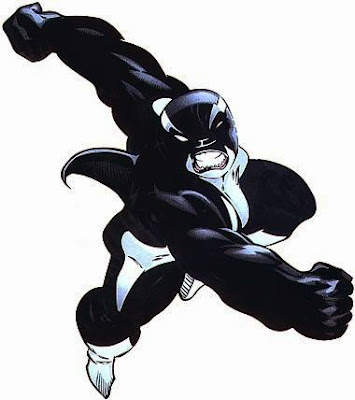 Her orca-like strength and endurance make her more than a match for Batman in a fair fight, on land or especially in water, but by the third act, and with the help of a custom-made, action figure-ready SCUBA suit (SCUBA, of course, standing for Self-Contained Underwater Batman Apparatus), he is able to save the day. 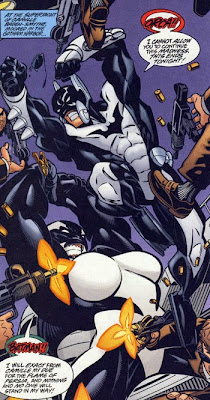 And that's pretty much the end of Orca, save for a brief appearance in Last Laugh and a briefer still one getting killed off in "One Year Later" Batman/Detective Comics story arc "Face The Face."

I always kinda liked the character, for a couple of reasons. First, she did not have the typical build and figure of, let's see, every single female supervillain ever. Second, like Killer Croc and Man-Bat (and sometimes Solomon Grundy or Clayface), she fit into the "big, tough, monster" category of Batman villain, of the sort that could give a more powerful superhero someone to fight when they team up with Batman. Third, I kinda like underwater villains, especially in the DC Universe, as poor Aquaman, a long-time favorite character of mine, never seemed to have enough cool villains of his own to fight. Fourth, she was a minor, slightly silly, oft-ridiculed Batman villain, of the sort Batman history is lousy with, and whom attain a sort of underdog status I always enjoy rooting for. Fifth, I just like typing the phrase "Orca, The Whale Woman."

Which, oddly enough, when I Google, I only find used on comics blogs making fun of Orca, like this 20008 one with the inspired title from Mr. Chris Sims (from which I stole one of those scans), or this older-still post on The Absorbascon.

Well, say what you will about Orca, and you will say more about Orca, at the very least, she now has an Astro City analog character based on her, and that's something you can't say about every Batman villain.

Incidentally, unless I missed some appearances—I don't remember her appearing as a Black Lantern during Blackest Night, which, if true, is kinda weird, as they were pretty desperate for dead Batman villains to put into the tie-ins—then Orca analog Maneater has already had one-third as many appearances as her inspiration.

Assuming she was inspired by Orca, and it wasn't just a pure coincidence that Busiek and company produced a villain that looked so much like one who appeared in like five comics. As an Orca advocate, I'm going to continue assuming that Maneater was created in knowing, loving tribute to Orca.
Posted by Caleb at 9:09 PM