Marvel Entertainment will, as of December of 2014, still be publishing and selling comics, because while it might not be the most lucrative business to be in, where are they gonna find the next Guardians of the Galaxy if they don't keep the comics division going as a Intellectual Property farm...?

What will they be publishing in the final month of 2014? You can click here to see it all, and read on to see only the few things I thought worth mentioning to you personally. Mostly so as to make bad jokes. 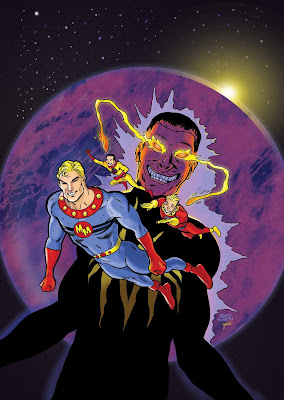 Okay, I give up...how did they get Jeff smith to draw a variant cover for this dumb thing...? And hey, props for applying the term "All-New" to a comic produced from a "lost" (i.e. quite old) script. 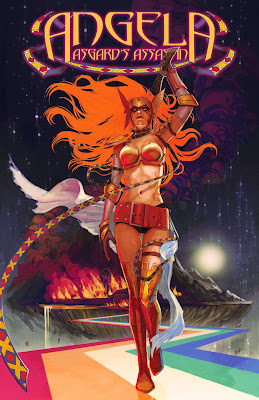 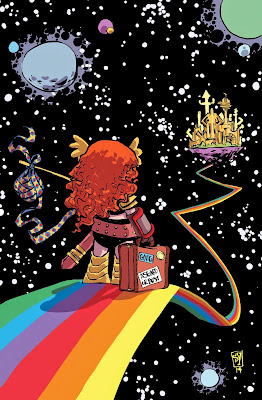 ANGELA: ASGARD’S ASSASSIN #1
KIERON GILLEN & MARGUERITE BENNETT (W)
PHIL JIMENEZ & STEPHANIE HANS (A)
Cover by STEPHANIE HANS
...
Variant cover by SKOTTIE YOUNG
• All her life, Angela -- the finest warrior of Heven -- was raised to hate Asgard with every fiber of her being.
• And now Angela knows the truth about her identity: She is Thor’s sister. She is an Asgardian.
• Cast out of her home and wanting nothing to do with Asgard, Angela must now strike out on her own!
• But what does Angela have that both Asgard and Heven want? And why are they so eager to get it?
• Visionary writers Kieron Gillen and Marguerite Bennett team with the legendary art team of Phil Jimenez and Stephanie Hans to finally throw the spotlight onto the Marvel Universe’s most dangerous inhabitant!
32 PGS./Rated T+ …$3.99

I like one of those writers and one of those artists a whole lot, but I am luke warm on the other writer an other artist.

I love the Skottie Young cover.

I don't know why it has two writers and two artists.

I still have no idea why this title even exists; does a "created by Neil Gaiman" credit really move comics? Was Lady In Bikini With Sword and Very Long Ribbons a design so inspired Marvel HAD to have it, even if it meant re-writing her scant history and origin...?

Not my dreams. The battle royale of my dreams consist of the Challengers vs. The Defenders vs. G.I. Joe vs. Transformers vs. The Marx Brothers vs. The Teenage Mutant Ninja Turtles for the fate of the universe.

Also, I have no clue who the "Astonishing Avengers" are. I guess Marvel finally launched so many Avengers books that I have now officially lost my ability to keep track of them all.


AVENGERS & X-MEN: AXIS #9 (OF 9)
RICK REMENDER (W) • JIM CHEUNG (A)
Cover by JIM CHEUNG
Looper variant by Paul Renaud
...
• Who will live? Who will die? Who will remain inverted? A shocking climax that promises to crack the Marvel Universe to its very core!
• An old foe must claim the mantle of his greatest enemy to save the lives of all he cares for!
• An X-Man’s horrifying fate! An Avenger’s appalling choice! If you read only one comic this century – This is it!
40 PGS./Rated T+ …$4.99

I appreciate the hyperbole. I like how it implies that Marvel read this one, and were like, "Fuck, we'll never top that! It will be at least another three generations before a writer and artist capable of topping this story will be born!" Also, "Hey, this puts Asterios Polyp and Fun Home and Los Bros Hernandez and all that arty shit of the last 15 years to shame, doesn't it?" 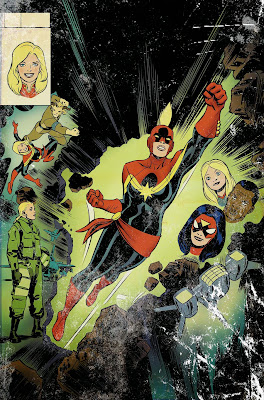 Either you dropped a zero from the issue number, or fuck you and your terrible lies Marvel Entertainment! This is a tenth issue, not a 100th solo issue anniversary special, whatever the fuck that means. Show your math! 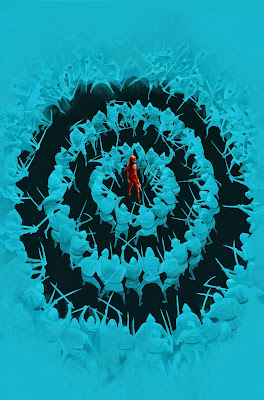 Props to Michael Del Mundo for a great Elektra cover. 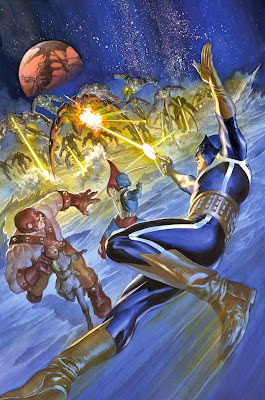 GUARDIANS 3000 #3
DAN ABNETT (W) • GERARDO SANDOVAL (A)
Cover by ALEX ROSS
...
• Who are The Stark? What is their aim? Can the Guardians survive a lethal clash with such formidable entities? Action, cosmic wonder and some surprise allies, brought you by the Most Amazing Creators in the World, D and G....”
32 PGS./Rated T …$3.99

Who are The Stark? I don't know, but I'm glad they've got a Stilt-Stark.

So, I guess this series is Marvel's "Thanks for the millions of dollars!" gesture to Dan Abnett...? 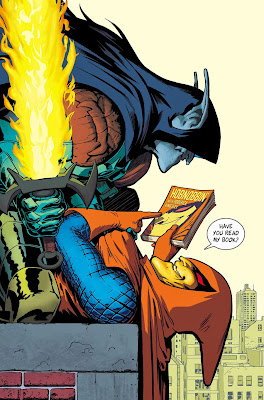 I continue to like these Javier Rodriguez covers for Axis: Hobgoblin.

I'm still too grossed out by Brian Wood to, like, want to read his work anymore (it's the telling Rich Johnston thing that really boggles my mind; like that's the one step that took the Brian Wood story from Kinda Scummy to What The Fuck Kind of Human Being IS This?, but since he brought his dick up in the first place (like, years ago, to Rich Johnston, for a comics industry "gossip" column), I would like to point out that the creative team of Wood and Smallwood is kind of hilarious, if only from a dick-joke perspective. 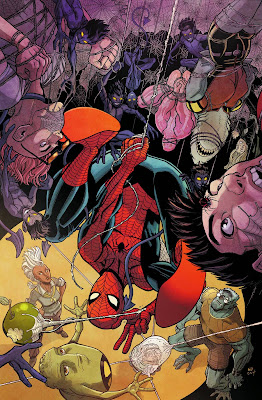 SPIDER-MAN AND THE X-MEN #1
ELLIOTT KALAN (W) • MARCO FAILLA (A)
Cover by NICK BRADSHAW
Variant COVER BY BENGAL
Variant COVER BY SKOTTIE YOUNG
• Meet the Jean Grey Academy’s new guidance counselor: Spider-Man!
• What’s a non-mutant doing at a school for mutants? What secret suspicion has fueled the formation of his special student class?
• And because you demanded it! Sauron and Stegron the Dinosaur Man! The villain team 65 million years in the making! You didn’t demand it? Well somebody did.
32 PGS./Rated T+ …$3.99

The one thing I rather liked about JMS's run on Amazing Spider-Man (aside from John Romita Jr's art, of course), was his making Peter Parker a teacher, which allowed the character to maintain his original connection to high school life while still allowing him to be an adult. I thought that was a perfect day job for an all grown-up, totally adult Peter Parker.

I don't have the book here in my apartment to check, as I read Jason Aaron's volume of Wolverine and The X-Men in library-borrowed trade collections, but I'm like 93% sure that Spidey already interviewed for a job on the Jean Grey School's faculty and was rejected by then-headmistress Kitty Pryde... 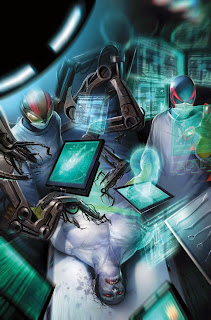 SPIDER-MAN 2099 #7
PETER DAVID(W) • WILLIAM SLINEY (A)
Cover by FRANCESCO MATTINA
SPIDER-VERSE TIE-IN!
• Weird science with Spider-people!
• Spider-Man of the year 2099 and Lady Spider of the steampunk 1800’s team up to daringly dissect Daemos of the Inheritors!
32 PGS./Rated T …$3.99

I was almost super-excited about this one. 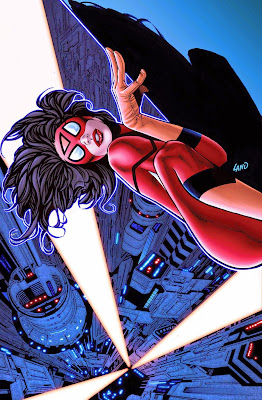 Well, you can't see her butt in this one. Regular interior artist Greg Land just has her using her spider powers to dry-hump the corner of a girder or some indeterminate part of architecture instead. 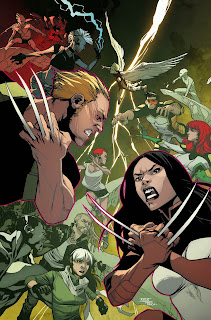 ALL-NEW X-MEN #36
BRIAN MICHAEL BENDIS (W) • MAHMUD ASRAR (A/C)
• The Ultimate face-off you KNEW was bound to happen! All-New X-Men versus the Ultimate X-Men! But when both side are heroes, who can be the victor? And what side does this leave Miles Morales, the Ultimate Spider-Man on?
32 PGS./Rated T …$3.99

My guess with the "Captain marvel 100th issue" thing is that they're adding up all her various solo runs. So 10 issues of this, 17 of the previous DeConnick-written run, the 48 or so of that Brian Reed written series that started after House of M, and then her original ongoing from the '70s.

I think they did the same thing with the current volume of Nova earlier this year. Which made less sense given the current Nova is not the same character as the one who accounted for 90% of the issue. At least in this case, it's all Carol Danvers, just with two different superhero codenames. But you know, it's Marvel, they can't pass up an opportunity to tout some made-up milestone.

Yeah these anniversary issues are pretty meaningless since they revert back to their current issue numbering the next month. At least in the 2000s, Marvel actually converted back to the original 500 something numbering for their comics. Here, it is pointless.


Who are The Stark? I don't know, but I'm glad they've got a Stilt-Stark

From what I vaguely recall of the 90s GotG book, The Stark were a world colonized by Stark Enterprises and they had Arno Stark as the GotG era Iron Man. Not sure how that all meshed with original Iron Man and 99% of Earth's heroes getting killed by the Badoon...