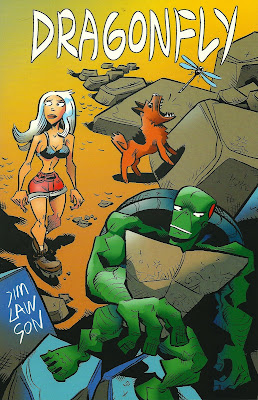 I guess when you've been drawing them for so long, it gets to be a hard habit to break?

This turtle man isn't necessarily teenage or ninja, and it's unclear whether or not he's a mutant. His name is John, and Lawson distinguishes him from his other turtle men in little ways (John has four fingers rather than three, and three forward facing toes, rather than two) and big ways (his head is much more fully articulated and human-looking).

In addition to a walking, talking turtle, Dragonfly has another thing Lawson apparently loves to draw in it: Dinosaurs. 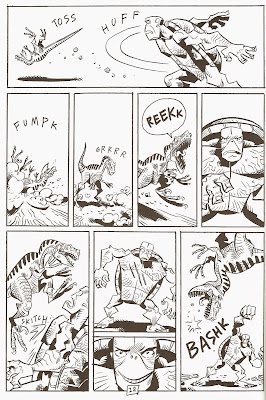 The story is, at the end of the first 82-page volume, still very much in the mysterious, set-up phase. John awakens from a brief, three-page dream to find himself trapped in some kind of weird containment cube, on a field strewn with the wreckage of a ship of some kind. He's not alone. There's a talking dog (who he will later name Ketch) and a woman whose arm was lost in the crash (who they will decide to call Dragonfly, after the tattoo on her shoulder). Oh, and there are also raptors, prowling the wreckage for a meal.

All three characters have no idea who they are or how they got here, and, the next morning, things get more mysterious still, when Dragonfly apparently re-grows her lost arm in her sleep. They all assign each other names until they can remember their own, and set about trying to figure out their situation.

New players quickly enter, including two cute little aliens, Plak and Ploo. They explain that they were part of the crew assigned to transfer the three—and a fourth character—to this artificial replica of prehistoric Earth, sans their memories, per the request of their client, of whom they can't say anything.

As for the fourth, he is an apparent Edward Cullen parody named Edgar, whose true vampiric form is a rather bizarre alien form, but, when in front of Dragonfly, he typically looks like a handsome young man in tight black clothes...or as handsome a young man as Lawson's style allows for. 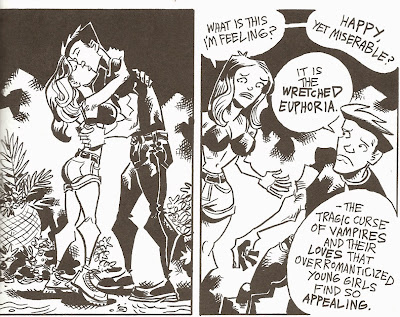 That style is as sharp and refined here as it has ever been, which is most evident in his human characters. Dragonfly has a body shape that Barbie herself would likely find over exaggerated, with ankles and wrists thinner than her lips, and a waist thinner than her neck. Big, big eyes and a comic strip-style half-circle nose give her an exaggerated, abstracted look that makes Lawson's drawings of his Guzzi Lemans character or Eastman and Laird's April O'Neil and Renet look highly representational.

Lawson's Edgar is just as exaggerated, the muscles bulging and the joints shrinking...tracing a line around the characters Lawson creates in them result in something akin to a jittery electrocardiogram.

His dinosaurs are, of course, top-notch. These seem slightly toned-down from the highly-realistic ones that populated his Paleo series, but not by much. In addition to the raptors, there are plenty of pterosaurs, including a Quetzalcoatlus, and a Tyrannosaur, which Edgar fights and kills in a pair of hand-to-hand battles. 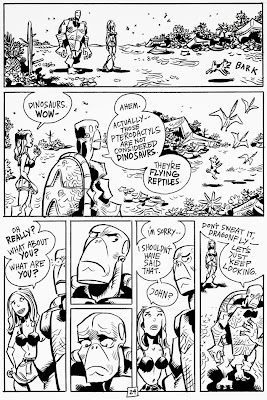 It's difficult to judge a story that's so clearly just getting started, but Lawson's art is certainly a treat, and this is certainly Jim Lawson at his Jim Lawson-iest. There's definitely potential here; his dialogue for the excitable little dog Ketch is generally genuinely funny, and the premise is intriguing, although, of the sort that could pay-off well or fizzle, depending on the future execution and eventual explanation. 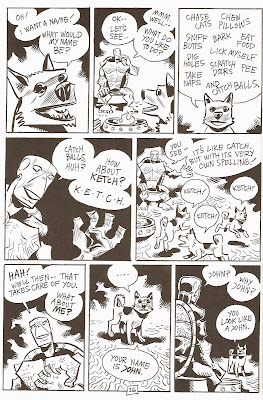 This being a Kickstart-ed project, I have no idea if there's a volume two coming or not and, if so, when, but I hope the answers are "yes" and "soon."

Thanks for the review of Dragonfly- I appreciate you taking the time to check it out and post up your thoughts.
Yeah, there's a turtle guy in it. Y'know- as I was writing the story and developing the characters, he just seemed to fit. In all probability perhaps it was just me going back into my comfort zone but honestly it's hard for me to say. The character John just felt like the right guy for the job.
That said, I still have a relationship with many of the old guys from the Turtle days, and I believe that there was a perception here (real or not) that I was exploiting my association with the TMNTs and using that to my advantage on this new property. While I tried not to let that bother me. in truth it did.
So- this (I'll call it) negative reaction has caused and is causing me to rethink the whole Dragonfly thing and right now I've pretty much abandoned the idea of continuing the storyline. There is a second issue that I posted up on my FB page and a third that is half-done. 2 more have been written but that's it. Somewhat sad for me really but perhaps I went into this a little naively and I should've considered better that I needed to separate Dragonfly from my previous work. I think it's the right decision.
So there you go. This little Dragonfly kerfuffle has not caused me to slow down- rather just redirect my creativity elsewhere, I guess.
Once again- thanks.
Jim Lawson

Hey, thanks for taking the time to read and respond; even if it was to deliver bad news about future Dragonfly comics in person.

I'm sorry to hear there was any negativity for you surrounding the experience of creating what was really a rather fun comic full of cool stuff--and now I'm sorta sorry I started out my post by referring to Dragonfly in connection to all your (great) TMNT work.

Good luck with whatever it is you're working on now; I'll look forward to reading it when its readable.