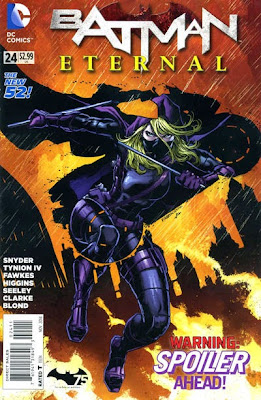 Batman Eternal #24 (DC Comics) Is this the issue Stephanie Brown fans have been waiting for? I...don't know. I know a friend of mine who knows the character only from her volume of Batgirl asked to borrow just this issue of Batman Eternal, and was disappointed in how Ray Fawkes, Scott Snyder, James Tynion and company's Stephanie Brown was so different from Bryan Q. Milller's.

This issue, drawn by Andy Clarke, is essentially the climax of the Cluemaster/Spoiler conflict...for now, as one has to imagine we'll be seeing more of both and their conflict before it ends.

At one point, Cluemaster puts on a pair of glasses that read "CluE," and gets hit on the head with a wrench: 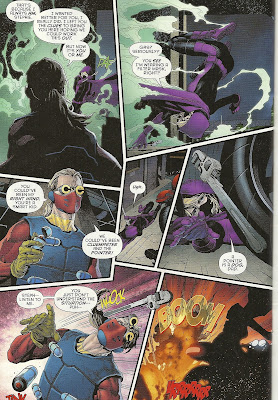 As he should. For wearing those glasses.

Also, Batman fights a ghost. With Nth metal. Is that from Batman: The Brave and The Bold...? That's the only place I've seen Batman fight ghosts with Nth metal before, but given how obsessed that show was with obscure DC Comics trivia, they certainly might have taken it from a 1971 back-up story somewhere.

Snyder and company are still playing he identity of Cluemaster's boss as a secret, keeping him in shadow at all times, which is strange, as Hush has been revealed as the puppet master behind many of the series' mini-bosses already. I'm not sure if this is a second mysterious puppet master, or if they just stuffed him back into the shadows for some reason (This guy dresses the same, so I'm assuming he's Hush).

I think this issue also introduces The New 52 version of Ratcatcher—the late '80s minor villain created by John Wagner, Alan Grant and Norm Breyfogle that Geoff Johns and company had killed off in Infinite Crisis—and his new design is incredibly terrible. But hell, it could have been worse: It could have been The Prankster's New 52 design, which is also seen in this issue.

The Multiversity: The Society of Super-Heroes: Conquerors of The Counter-World #1 (DC) At first blush, this comic with the way-too-complicated title looks an awful lot like a lost Grant Morrison contribution to the doomed, short-lived "First Wave" sub-line of DC Comics from a few years back, where they combined a rather random assortment of characters—Doc Savage, The Spirit, Batman The Blackhawks, Rima the Jungle Girl—into a new, old-school pulp inspired DC Universe that never went anywhere.

At second blush, it looks like Grant Morrison's pitch for a New 52 Earth 2 book that never came to pass.

But once you sit down to actually read the book, it's at once both more complicated and more simple than that. Morrison and his chief artistic collaborator on the issue, pencil artist Chris Sprouse, aren't simply confining their quoting and borrowing from a single era of comics, or shunting it all into a single aesthetic. Richard Dragon, Kung-Fu Master, Watchmen, Young All-Stars and Geoff Johns' Green Lantern: Rebirth are as ripe for picking as the earliest super-hero comics characters taht DC would eventually acquire.

In other words, it's a fairly broad remixing of a random swathe of the DC intellectual property into a story-shaped, insignificant sound-and-fury with a charmingly-drawn interbellum aesthetic.

Here's a world, Earth 20 if you wanna go by the cover design, where a cape-less, pistol-packing Doctor Fate in jodhpurs—"I prefer 'Doc'"—assembles a Society of Superheroes (S.O.S., get it?) consisting of Immortal Man (who was also Anthro), Green Lantern Abin Sur (whose face now resembles that of a sleeker version of Etrigan's, and who wears a more elegant and less color-blind costume inspired by that of the Golden Age Green Lantern), Al "The Atom" Pratt ("The only person who ever completed the Iron Munro bodypower course," and whose blue face mask now has the same atomic symbol that Dave Gibbons and Alan Moore gave the blue-faced Doctor Manhattan in Watchmen) and The Lady Blackhawks (The Blackhawks...only ladies!).

What have they been assembled to do? Combat an invasion from a neighboring "Counter-Earth," apparently consisting of only villains, who are kinda sorta vaguely the opposite numbers of the S.O.S. team...? Maybe...? (Some of the evil opposites are more obvious than others; Shiva, for example, seems to mainly share "being a woman" with the Lady Blackhawks). These are Vandal Savage, "Doctor" Felix Faust, Lady Shiva, Blockbuster and the nattily-dressed Count Sinestro, who has under his power Parallax, "The Fear-Beast" (This Parallax is a particularly great design by Sprouse and/or Morrison).

There's some mention of the Monitors, Nix Uotan and the haunted comic from Multiversity #1, but the book mostly stands on its own, and even then only as a sort of exercise in character redesigning. Lots of fun rethinking goes into the characters, in terms of origin, characterization and costuming, but the story basically just boils down to A) An introduction to the heroes, B) A narration summary of a war between the heroes and the villains, C) An introduction to the villains, met in the process of being bested by the heroes, D) The end.

It's fun, and I enjoyed reading it, but it's not good comics, if that makes any sense at all. It's a very well drawn, completely produced pitch for a comic series...one that will likely never come to pass, of course, because no one really does Morrison as well as Morrison (not anyone that DC can get to work for them at the moment, anyway), and Sprouse seems either too expensive or too distinctive an artist to produce a monthly for DC.

Morrison has always trusted his readers a lot, and left a lot of the actual story off the page, leaving it to the readers to write in their own imaginations and only putting the important and/or cool bits on the page. I wonder if, at this point, Morrison's gotten a little too good at that trick, as this is all cool bits and the basic mechanics of a story, but it doesn't say or do anything at all.

Morrison can still write a good kick-in-the-balls joke, though: 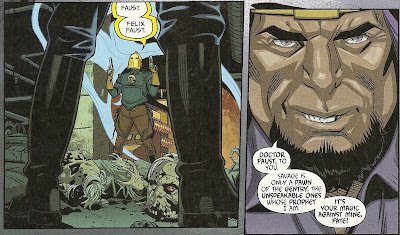 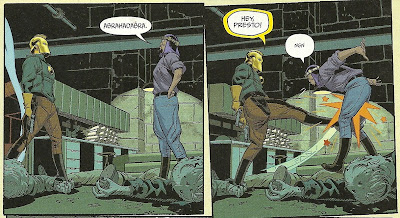 No matter how disappointing a project of his might be, or how uncomfortable his obsession with tugging at Alan Moore's beard might make you, you can't take that away from him.

The New 52: Futures End (DC) Don't let the cover fool you: The Joker is not in this issue. Not the Joker from the modern DCU, or the Joker from the "Five Years From Now" DCU, nor the one from the "Thirty-Five Years From Now" DCU. Well, the teeth of that last Joker might be in this issue, during a grotesque slideshow that 2049 Brother Eye shows 2049 Mr. Terrific, but who can tell for sure?

Sensation Comics Featuring Wonder Woman #2 (DC) This is the second issue in a row where I've found myself pretty disappointed in the contents, despite really liking the fact that the comic exists at all, and finding myself wanting it to be good (I don't remember the launch of the similar digital-first anthology series Legends of the Dark Knight and Adventures of Superman being quite so rocky, but both series produced some good comics during their short runs).

Under Gene Ha's cover of New 52 Wonder Woman lifting something are two standalone Wonder Woman stories, the first seemingly set firmly in pre-New 52, Phil Jimenez/Greg Rucka continuity, the latter being set during Wonder Woman's youth (Sadly, she is not Wonder Tot in it, but one hopes they'll get around to a Wonder Tot comic before the series' cancelation).

That first one is a pretty basic, fill-in feeling story by writer Ivan Cohen and artist Marcus To, in which Wonder Woman faces Dr. Psycho...and the Barbara Minerva, were-cheetah version of The Cheetah. It was nice to see more familiar versions of Wondy and Doctor Psycho, even if the latter is a little more...Law and Order: SVU than my favorite incarnation of him (The original Golden Age iteration, by his creators William Moulton Marston and H.G. Peter).

It's still early enough in the series that its unclear what the exact premise will be. Of the four stories DC has published, two were apparently post-Crisis, pre-New 52, one was set in the New 52 and the fourth could probably fit in any Wonder Woman continuity. With Adventures, the Superman stories were almost exclusively post-Crisis, pre-New 52, but generally continuity-lite enough that they simply felt like classic Superman stories. Wonder Woman's more complicated history of reboots has saddled her with a few more iteration signifiers than Superman or Batman though, so it's quite possible these stories will end up reflecting certain eras in exclusion of others. It remains to be seen.

Anyway, the Cohen/To story is fine. Unremarkable, but therefore not remarkably bad, either.

The back-up, by writer Jason Bischoff and artist David Williams, is a much more elegant-looking piece, with Williams' art evoking that of Stuart Immonen or Sara Pichelli or Olivier Coipel here and there—good company, aesthetically speaking. The story is a tad generic, but effective: Queen Hippolyta narrates of her love of her child, and how she once inadvertently challenged young Diana to defeat her, which lead to a childhood-long quest to best her in combat.
Posted by Caleb at 10:23 PM