Orange you glad he's here to save the day...? 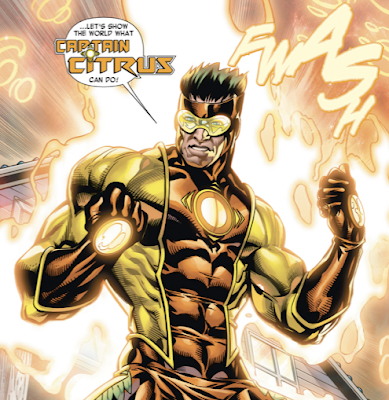 Marvel might have canceled their title Avengers Assemble, the Avengers book starring the same line-up of characters that starred in the movie, last spring after some 25 issue. But they will still publish you a "custom copy," provided you've got as much money and access to a big enough audience as, say, The Florida Department of Citrus. 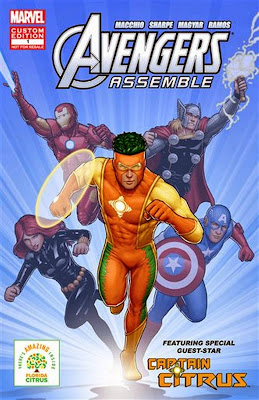 As you may have read or heard in this past week's business news, Florida's citrus industry hired Marvel to revitalize their Captain Citrus mascot—an anthropomorphic orange with a leafy green cape and a big "C" emblem on his chest into something more, well, Marvel-ous.

The new Captain Citrus is a young man from Florida, who lives with his family in an orange grove and has solar rather than citrus-based powers. One might thing he'd go with something like Captain Solar then, but, well, maybe he just really loves oranges. Or he's bursting at the spandex seams with state pride. Or he found the original Captain Citrus, dying from citrus greening, and promised to carry on the dying fruit-man's legacy (While not human, I could easily see the original Captain Citrus existing in the Marvel Universe; he could have been a mutant, for example. He doesn't really look any weirder than Doop, does he?)

It's easy to see why the citrus industry would like to try and rub a little of that movie-infused Marvel magic onto their character, but what was in it for Marvel, other than whatever they got paid? Well, they apparently produced one million of the damn comics—about ten times as many issues of Batman sell in the direct market each month—for free distribution to the captive audience of Florida school children. The comics story-portion is 12 pages long, and there are eight pages of ads, seven of which are devoted to how awesome orange juice is and how important it is to nutrition, and one page for the season premiere of an Avengers cartoon. Oh, and this is an Avengers comics, in which Captain Citrus is billed as a special guest-star, so it advertises the Marvel IP as much as it does the awesomeness of orange juice.

Our story, written by long-time Marvel editor Ralph Macchio, penciled by Kev Sharpe and inked by too many inkers to name, begins in Orlando, where big, pink, muscular androids are tearing the joint up: THROOM! SKRASSHH!

Citizens run and cry for help, but the police seem completely oblivious, as if they can't even see what's going on. A quinjet lands and out jump a quartet of Avengers, each introduced via caption with a few-word description, like "IRON MAN, Hi-Tech Knight!" an d"BLACK WIDOW, Espionage Expert!" Rounding out the team are Thor and Captain America.

The heroes, written as a mix of their comics and movie personalities—Iron Man in particular seems much more Robert Downey, Jr. than Marvel Universe Iron Man; so quippy he's practically Iron Man.

The battle rages long enough for it to make the news and be seen by a family of four in an orange grove, where a young man wearing an orange-colored shirt is discussing the virtues of orange juice with his younger sister. 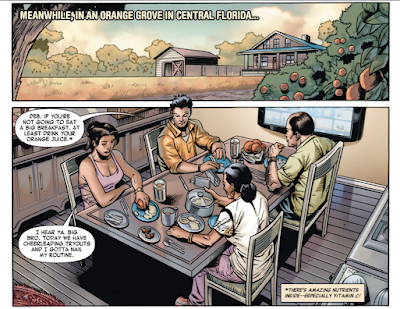 The young man discusses his not-secret-from-his-family origin, in which he found a pair of solar pods in their orange grove. He powers-up to go help the Avengers with is several solar powers: Flight, energy blasts, the ability to create orange "hard light weapons" (like that orange energy shield he's shown with on the John Tyler Christopher-drawn-cover) and even the ability to project his power into other objects, when he essentially acts like a shot of orange juice to Thor's Mjlonir to help them put down all the androids.

The Avengers accept the new hero into their fold almost immediately, foregoing the grand Marvel tradition of first fighting and then teaming up upon first meeting a new hero for the first time.

Captain America doesn't even laugh when Captain Citrus introduces himself, or question who awarded him the rank of "Captain." 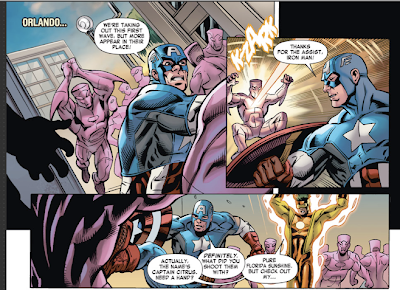 With the Sunkist Sentinel in tow, the Avengers track the androids—and the apparent mental manipulation of the local police—to the source, a high-tech headquarters, where they find "THE LEADER, Gamma-Enhanced Evil Genius!"

In the comic's longest stretch of expository dialogue, delivered while the Avengers Plus One are telepathically immobilized, The Leader explains he's built a Mental Manipulator that he was able to use on the police officers, and will soon be able to use on large swathes of the population. The only side-effect of his machinery? Extreme cold and frost, which is hurting the local citrus crops.

Whew! Good to know it's just an imaginary, green mad scientist using an imaginary invention that's hurting agriculture in Florida, and not, like, climate change or anything we might have to do anything at all about!

Hearing that innocent oranges are in danger, Captain Citrus is able to break free, and use his ill-defined super-solar powers to absorb a bunch of the lightning that powers the machine and, uh, somehow free The Avengers.

But at what cost?!

For there, lying prone on the ground, is Captain Citrus—dead!

For his solar pods start to glow, and vines start to grow from the ground and, somehow, the pods or the grove or some combination of the two brought him back to life. 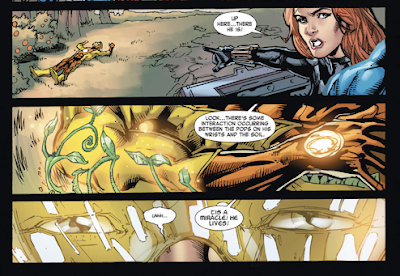 I'm kinda surprised they didn't say the orange juice made him immortal. I think that would really help move bottles of orange juice, but the comic is actually rather restrained in it's hard sell of orange juice. If you removed the ads and that one breakfast exchange, this isn't really that far removed from a competent if generic Marvel comic.

Is this the last we'll see of Captain Citrus? Well, if Florida's citrus industry decides to commission more comics featuring him, hopefully they'll have him team-up with Groot, who should bring an interesting perspective to problems facing an industry that survives on the production of fruit from trees, or Man-Thing, who is probably Florida's most prominent Marvel. Or was, until Captain Citrus debuted.

And, if Marvel is allowed to use this Cap in their comics universe, well, the Flordia squadron of the Avengers' Fifty-State Initiative has a new recruit and, if nothing else, they have a character they can kill off in a big event series to let readers know the story is important.

In the mean time, if you are not a child attending school in the state of Florida and would like to read about Captain Citrus—and perhaps learn about how fucking awesome citrus-products are—the digital comic and citrus propaganda are available here.
Posted by Caleb at 11:00 AM