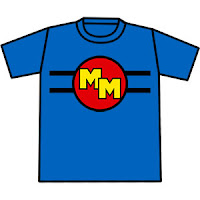 So the biggest superhero news to come out of this year's San Diego Comic Con International was, what, that Joe Quesada drew a crappy picture of Marvelman that some colorists finised on a computer for him, and he's unlikely to get sued by Todd McFarlane or Neil Gaiman or anyone for doing so?

When I first saw the headlines about the announcement, I caught my breath, as the legal tangle surrounding Marvelman was so tangled I assumed I wouldn't ever be able to read those damn books...or at least not until I was a very old man. Had Marvel somehow managed to untangle it all, and to have done so on the down-low to the extent that no one even noticed until their announcement?

And then I read the actual press release, which actually doesn't say much of anything about anything. Only that Marvel bought the rights to the character from creator Mick Anglo. But then, last I knew, he's only one of the people claiming the rights to various Marvelman comics stories, and he wasn't even the most likely victor in the struggle for "the good stuff" (i.e. the superhero deconstructionist stuff by Alan Moore and Gaiman, the stuff people talk about when they talk about Marvelman).

Other than that, the only news in the initial announcement was that Marvel was "talking to" Alan Moore, Neil Gaiman and Mark Buckingham, and that more news would follow at some point in the future.

It's hard to get too excited about the announcement that there might be an exciting announcement at some point in the future.

For now then, the "big news" regarding Marvel and Marvelman is simply that the company is selling that ugly Quesada image as a 24-by-36 inch, $9 poster, and that they are selling Marvelman logo T shirts for $20 through their website.
Posted by Caleb at 5:53 PM

I'm the opposite of excited for "Marvelman".

Me too. They have bought it?, so what? guess now quesada can kill him "forever" and then bring him back next month like captain america.

I thought you would've been excited about the fact that Geoff Johns confirmed that Vibe would be a Black Lantern.

Thank you for calling the emperor out! This year's crop of "big" announcements from SDCC was decidely underwhelming, and the "biggest" one was laden down with so many legal caveats that they should have had one of those fast-talking guys featured at the end of car commercials come on after Quesada to read all the disclaimers.

Also interested? All those people who are excited both by intellectual property law and post-modernist superhero comics.

just wondering... what is it exactly that you find so crappy about quesada's MM poster??? it's not the most dynamic image ever produced but it's not so bad. not great but i certainly wouldn't call it crappy.

they have bought it?, so what? guess now quesada can kill him "forever" and then bring him back next month like captain america.

Oh, I'd be excited about seeing the Moore/Gaiman stories, and I know anything with either of those men's names on the cover will sell like hotcakes in bookstores and to libraries.

But so far that's not what the announcement is. I'm not sure who is excited about the prospect of Marvelman in the 616 or Marvel Masterworks collections of the Anglo material though...

what is it exactly that you find so crappy about quesada's MM poster??? it's not the most dynamic image ever produced but it's not so bad. not great but i certainly wouldn't call it crappy.

Admittedly a large part of my dismissive tone was probably contextual; since that was the concrete result of Marvel's self-proclaimed biggest announcement of the Con, I'd kind of expect more, you know?

I'm not terribly fond of Quesada's current drawing style (which seems a lot uglier and static to me than the stuff he was doing in the '90s; that stuff didn't try to look as realistic as his current stuff does, so when the anatomy was goofy or whatever it still seemed to move...and to look like maybe it was goofy on purpose), and this picture in particular looks like a rough pencil sketch that colorists computer-inked and designed the background for. I often have a hard time expressing this, but I prefer drawings that look like drawings, as opposed to images with a lot of computer stuff done to them.

Now I'm sure it ain't easy to do a drawing of a single figure that would knock my socks off and make me want to hang it in my house somewhere, but this isn't it. It looks like something Quesada might have sketched out during a meeting about acquiring the rights and sent to the art department to turn into a poster.

Does that make any sense? If not, in short, I think it's "crappy" in that it's disappointing...it looks like the variant cover for just another Marvel comic, not a poster celebrating what Marvel was heralding as the biggest news story since...well, since Cap started to come back to life, I guess, which was only a month or so ago.

Tactically it's a master stroke. It puts everyone else on the defensive so it seems THEY are the ones holding up reprints.

And don't forget while Moore might not be talking to them Gaiman has worked with Marvel for years.

IIRC Moore has given up his claim.

So while it's premature I think Marvel is in a good position to bring back Marvel/Miracleman.

I'd be excited to have a chance to buy re-prints of the Moore-Gaiman Marvelman stuff, but I am not holding my breath. If Quesada bought the right to acquire a "tactical advantage" over Alan Moore and Neil Gaiman, then the odds of ever seeing them are pretty low. Moore is a pretty stubborn man and Gaiman doesn't need Marvel at this stage his career.