One good children's book deserves another 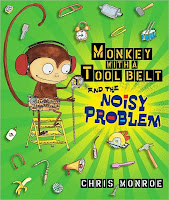 Last summer I talked at some length about a children’s picture book with an unbeatable premise, Monkey With A Tool Belt, by Chris Monroe, a very gifted artist with a skinny, slightly shaky line whose drawings are a perfect balance between child-like and professional.

In this installment Monroe doesn’t restate the brilliant premise in the straightforward, elegant manner she did in the first book (That is, ““Here is Chico Bon Bon. He is a monkey. Chico is a monkey with a tool belt”). Instead, the story simply opens with Chico Bon Bon in bed, being awoken by a loud noise, written as “AROOGA BOOM CLANG CLANG.”

Chico, who is an extremely helpful monkey and not anywhere near as mischievous and malicious as the picture that probably arises in your imagination when you hear the words “monkey with a tool belt,” leaps out of bed to solve the problem, revealing that he sleeps with his tool belt on over his pajamas.

He takes off his pajamas, and Monroe gives us another look at his tool belt and what it contains: 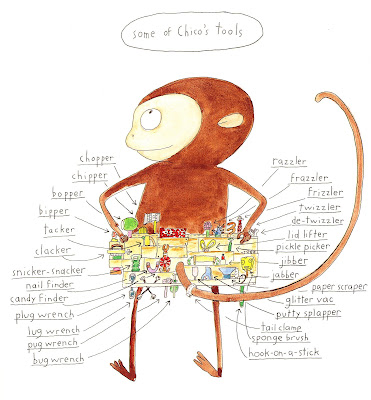 “He had every tool a monkey would ever need,” the narration tells us. What does a monkey need with a pug wrench or a buck wrench? I don’t know. It never comes up.

Thinking it’s the wind, he fixes his bedroom window and goes down to breakfast, but he still hears it 17 times, so then he begins to investigate his house for the source of the noise.

This means busting out such particular tools as his “hear-a-lot-tool” and “stair-staring tool,” but no luck. Then he imagines various explanations, which Monroe provides funny little drawings of (termites, talkative squirrels, etc.)

Finally he searches his entire house, which leads to a wonderful two-page spread that was waaaaaaaay to big for the scanner. Here are the two halves of it: 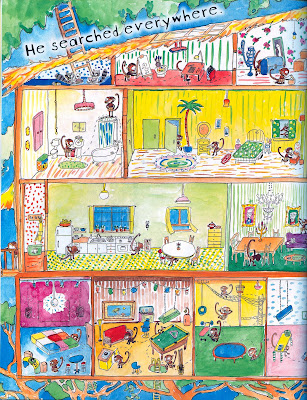 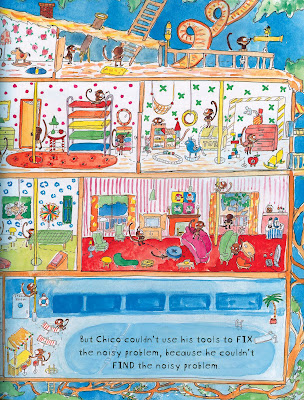 Would you believe Chico Bon Bon lives in that huge house all alone? I guess that’s the benefit of being so good with tools; you can build yourself as a big a house as you want.

When I finally become a millionaire, and it’s really only a matter of time since comics blogging is such a lucrative field, and I decide it’s time to stop renting and start living in an eccentric mansion, I think I’ll just take a copy of Monkey With a Tool Belt and the Noisy Problem to the architect, open it up to this page and say, “Make it just like this. Only with some trapdoors, and a secret passage behind a revolving bookcase.”

Chico finally discovers the source of the big noise about halfway through the book—there’s something noisy in his laundry chute.

It’s a pretty unusual problem, one few homeowners probably ever experience themselves. I won’t reveal it here, as the discovery is such a delightful surprise, but rest assured Chico is up for the challenge.

In a 12-panel, two page sequence—the only part of the book where it takes on the structure of comics—Chico makes his plans and calculations and, using his banana cannon, he takes care of the problem.

Like a lot of sequels, this one is weaker than the original in that the premise is no longer as original as it was, but it’s still a book about a monkey with a tool belt, and it’s kind of hard to imagine that ever getting old. Monroe is still a great drawer, and, in fact, here Chico seems rounder and cuter here than he did in the first book.

If you only read one new children’s book about a monkey with a tool belt this year, make it this one.
Posted by Caleb at 12:01 PM