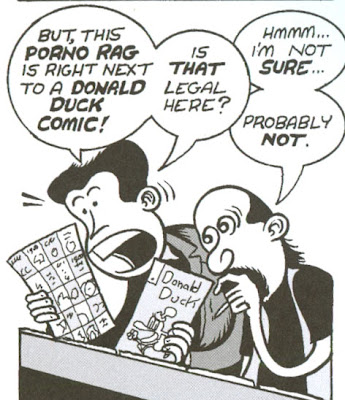 The above is a panel from a 2001 strip entitled "Latin Laissez-faire"that Bagge did for Reason magazine, one of the many collected in Everybody Is Stupid Except for Me and Other Astute Observations (You can read the whole strip here).

As you can see, Bagge has a rather idiosyncratic way with Disney's most popular cartoon duck, the huge bill/mouth, head and eyes making the often psychotically angry duck look super-psychotically angry. Bagge's trademark, arcing semi-circle limbs give Donald a kind of purposeful aspect to his anger, too. And that's just a quick, tiny sketch of Donald as a tiny part of a panel dealing with something else entirely. Imagine a whole comic focusing on Donald.

Hey, fellow Columbusites! Remember in 2004, when the Wexner Center for the Arts hosted the exhibit Splat Boom Pow! The Influence of Cartoons in Contemporary Art? Remember, they had it in the Belmont Building, one of the Wex's satellite sites, as the center itself was being remodeled at the time? And in a smaller gallery space next to the Splat Boom Pow! exhibit was the Tea and Coffee Towers exhibit, featuring tea and coffee sets designed by 20 of the world's top architects?

Well Bagge apparently went to it, as it's mentioned in a panel of one of his Reason strips: 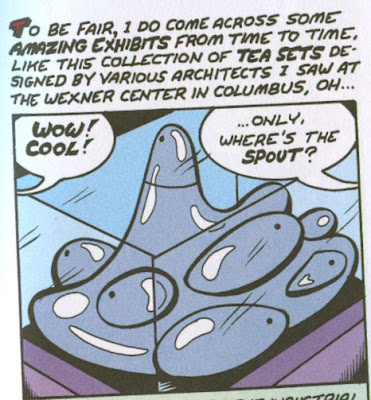 That panel is from the 2004 strip "'Real' 'Art'" (Or "Mr. Grumpy Goes to an Art Museum and Comes out Belaboring the Obvious") (You can read that strip online here).

Bagge probably took in the tea set show while in town for a panel he participated in with Gary Panter and Jessica Abel that was one of the events that was held in conjunction with Splat Boom Pow!

I'm sure big city comics readers in cities like New York, Chicago, Seattle, Gotham City and Metropolis are used to hearing their hometowns referenced in comics constantly, but it's still always a bit of a surprise to see Columbus pop up in a comic I'm reading like this.
Posted by Caleb at 4:31 PM

I remember those exhibits ... they were pretty cool.