Why did Palin resign? Only Palin—and political cartoonists—can know for sure

It's common knowledge that if you have bad news of national interest to report, the best time to do it is on a Friday afternoon, as most reporters and editors are on their way out of their offices for the weekend, and it's extra-hard for any news organization to throw together the sort of thorough coverage they'd be able to manage on a weekday morning. And if you really want to downplay that bad news you have to give, better make it the Friday before a holiday weekend, as the major media types are likely to already have called it a week, and the general public will be less likely to pay attention, since they'll be busy celebrating their holiday.

That's why Alaska Governor Sarah Palin's decision to announce her resignation 4:30-ish last Friday, July 3 seemed so suspect. Well, that and the fact that despite talking for about ten minutes, she never actually explained the rationale for her decision, at least not in a way that made any sense. And that the announcement runs counter to all of here stated (and conceivable) goals. And that the announcement seemed hastily thrown together, with her performance being closer to the cringe-worthy Palin-during-an-interview than the Palin-delivering-a-well-rehearsed speech (and her press secretary was in New York City at the time of the event).

Of course, none of that really means anything, as Palin has repeatedly demonstrated that she won't be forced to follow the rules of politics, either because she doesn't know/understand them, or because she doesn't agree/believe in them, or she just likes doing so to cultivate an outsider image.

So the Friday afternoon before a holiday announcement may not have actually been some sort of preemptive damage control, it may have just been the latest Weird Sarah Palin Action in a long line of them. It certainly didn't really do a whole lot to diminish coverage, as the way she went about it—i.e. not giving a real reason—simply invited more speculation then a "So yeah you guys, I think I'm going to just start going on a speaking tour because it's tons more lucrative and I've got mouths to feed" would have.

You know who the true victim's of Palin's announcement are? No, not the people of Alaska who voted for her, or the English language, or political rhetoric, although those are all some good guesses. No, it's America's political cartoonists, who had to attempt to make some sort of statement accompanied by a funny drawing about Sarah Palin resigning, despite having no idea why she did so.

What did the poor wretches come up with on such short notice? Let's take a look, shall we? 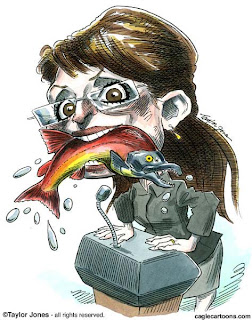 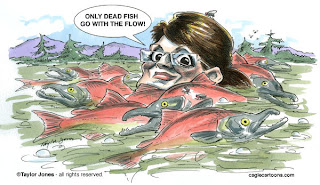 These similar images are both by Taylor Jones. Both seem to play off of her phrase regarding dead fish in her remarks, which I'll quote here in context...for whatever the context is worth:

Life is too short to compromise time and resources... it may be tempting and more comfortable to just keep your head down, plod along, and appease those who demand: "Sit down and shut up", but that's the worthless, easy path; that's a quitter's way out. And a problem in our country today is apathy. It would be apathetic to just hunker down and "go with the flow".

Nah, only dead fish "go with the flow".

Jones' first image plays up the incoherence of Palin's announcement, while also managing to imbue his caricature with the animalistic characteristics so often associated with Palin, on account of her outdoorsy reputation and her state's wilderness environment. What it's actual message is, well, that's a little more cryptic, but who can blame Jones for being cryptic about a cryptic statement? Maybe this is just a funny drawing to go alongside someone else's opinion piece.

I'm not sure I get the point of the second one either; it's basically another variation of the first, only with one of her strange metaphors quoted. 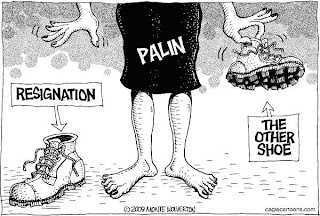 Monte Wolverton's was one of the first cartoons I saw after the announcement, and he did certainly capture my own immediate reaction, of, "Okay, why is this lady doing this and why is she doing it now?" Unfortunately, it's not much of a cartoon is it? It's simply an illustrated metaphor, with everything labeled, including "The Other Shoe," with those words, despite the fact that we can tell it's another shoe, on account of it being the, um, other shoe in the cartoon.

Was there really no more clever way to convey "Oh ho, I bet there's more to this! When will the other shoe drop?" than to draw this?

But maybe Wolverton had to turn it around in ten minutes to have it ready for the following morning's paper, I don't know.

Lisa Benson ties her cartoon into the timing of the Palin's resignation in this multi-panel piece, and effectively demonstrates the Republican Party's fascination with Palin, as well as their confusion at her latest move.

It also works well as a metaphor for someone who burns brightly only to be more quickly extinguished, which works well if this is the end of Palin's political career. In that case, this is a particularly good metaphor. I don't know that it is of course; Palin did say she at least planned to campaign on behalf of other politicians in her July 3 speech.

Too bad about the "Palin" label there, though. I think Benson could have probably communicated that the rocket was Palin without having to write the word "Palin" on its side. But otherwise, not bad at all!

Jim Morin of the Miami Herald also ties his cartoon into the timing, but his implies the opposite of Benson's—not only is Palin not done with politics, but this is actually the start of her run for the presidency in 2012.

Tony Auth sees Palin's move as the death of her political career. Is that the case? I don't know, but I really like this cartoon. Again, the labeling seems superfluous (obviously that's a fortune teller, obviously that's Palin), but I think trying-to-read-a-skeleton-hand is a pretty funny gag. Has that been done before, in a different context? If not, then this is definitely one of those jokes that falls under the so-obvious-in-retrospect category. 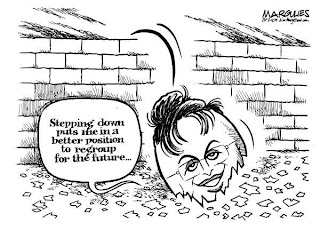 Wait, she didn't say this in her speech at all. What is the point of this nonsense? There's no need to paraphrase or put goofy rationales in her mouth; her mouth was full of readymades last Friday! 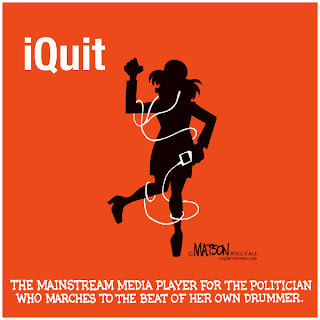 I actually like this one, by R.J. Matson, even less. The tangled cord is kinda clever I guess, but how old is the ipod advertising campaign it's riffing on? Old enough that I can't remember seeing one recently, which means ancient by today's accounting for time. Keep up, newspapers!


Here are a couple of straightforward "Hey, this crazy lady is being crazy" entries... 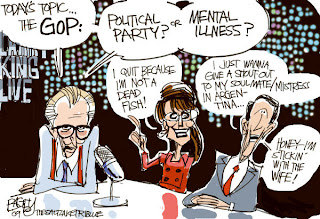 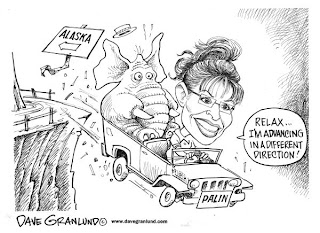 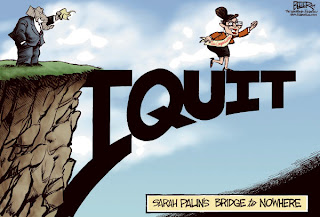 And, finally, here's one by Jeff "Mister" Darcy, of my favorite newspaper, The Cleveland Plain Dealer:

He gives a pretty good reason, one I could definitely buy. If you're getting paid so-so to do an extremely hard job when you could be getting paid insanely well for doing an easy-ass job, why not cash-in while the cashing-in's good? Especially if you have no intention of running for president in three years. And whether Palin has any intention of running for president in three years, I don't think she has a chance in hell of winning that race, and, if she feels the same, then why bother running at all?
Posted by Caleb at 6:26 PM

I just can't see what anyone sees in her.

Someone was arguing with me on her behalf - he didn't say anything positive about her, but he simply tried to deflect the argument by saying that other politicians say stupid things too.

. . . I had no idea what he thought to accomplish with that point then, and I still don't know.

My guess is that the real answer is pretty darned close to the last cartoon...she's going to go off and make a ton of money as the Far Right's Darling, presumably as a distaff version of Rush Limbaugh.

And the good people of Alaska are the ultimate winners!

It drives me nuts that whenever I criticize Palin to any of my conservative friends, I get the "I thought you liked strong women" argument. Which in the case of Sarah Palin is a bit like saying "You said you liked apple pie, so why don't you like this apple pie with a dollop of baby poop on top of it?"