PSA: This is a Comic Book at Mahan Gallery August 1-28 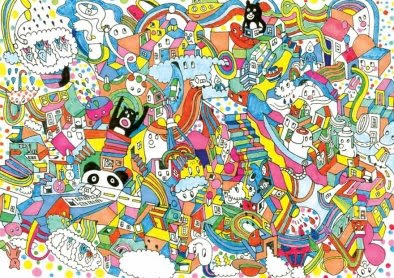 (Above: Image by Lee Mei Yan; more examples of iamges from the show are available here)

Hey comics fans! Do you live in or within driving distance of Columbus, Ohio? If so, you're going to want to make sure you visit The Mahan Gallery in the Short North this month to check out their new show, This is a Comic Book.

The show surveys "new perspectives in comics and the varying implications of displaying them in a gallery setting," according to the official gallery PR. "This is a Comic Book intends to inform the public while encouraging investigation from even the most knowledgeable comic book reader by removing the work from its usual method of interaction and directing a microscopic lens on the works as both illustration and creative writing."

In practical terms, this means Mahan's walls will host work form fourteen excellent comics creators, many of whom you've no doubt heard of:

—Lauren Weinstein (The Goddess of War, Girl Stories, Inside Vineyland)

At the show you can also purchase an inexpensive-ish catalog/zine which will feature a selection of images from the show, artist bios, interviews with Phonzie Davis and Lee Mei Yan, a curators' note from Jimi Payne and Colleen Grennan, an essay by former Comics Journal editor Anne Elizabeth Moore about recent comics history, another essay by Wexner Center for the Arts film and video curator Dave Filipi about some of the challenges he experienced showing comics in a gallery setting when he oc-curated last spring's Jeff Smith: Bone and Beyond and a third essay by comics blogger, critic and know-it-all loudmouth J. Caleb Mozzocco about how the only way to really experience comic books is to read the damn things. Yes that's right, for a couple of dollars you can get the same sort of content you get from me here all the time for free, only on paper! And not-free!

Seriously though, my questionable contribution aside, it sounds like a really cool package, and it will be pretty small-run, so get yours while you can.

You can find Mahan's contact info and address here if you need to know their hours of operation or to look up directions or anything like that. I'd recommend stopping by this Saturday between 6 and 10 p.m. if you don't mind crowds; that's the opening reception, and it's also the night of Gallery Hop, so there should be plenty of activity and people watching opportunities in the neighborhood.

On the subject of gallery shows in the Short North in the month of August, you may also want to check out Rivet Gallery's We'll Be Right Back...After These Messages..., a show featuring art inspired by '80s cartoons.

Here's something Rainbow Brite-y by Charlie Owens that the gallery's using to promote the show... 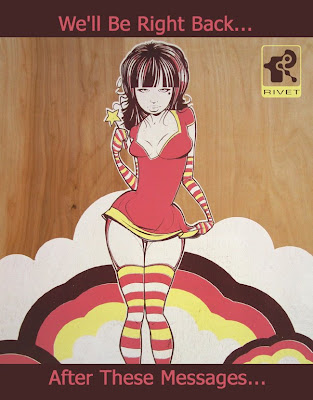 And here's a Masters of the Universe-related piece on a flyer for the show... 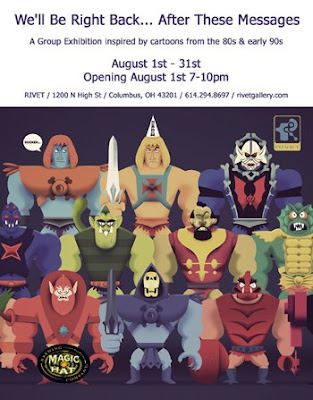 Sweet, thanks! I saw that, but couldn't make it bigger.