An interesting use of comics dialogue bubbles as an art element 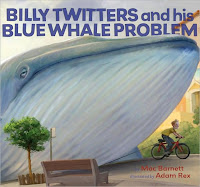 Billy Twitters and his Blue Whale Problem is a new children’s picture book written by Mac Barnett and illustrated by Adam Rex, the prolific artist responsible for such books as Frankenstein Makes a Sandwich and Frankenstein Takes the Cake (both of which I’d highly recommend, particularly to comics fans).

To be honest, I didn’t really care for it. Billy Twitters, who would have had a kind of funny name if Twitter hadn’t ruined the word “twitter” for all time, is a grade school boy whose mother is always threatening him with the purchase of a blue whale.

Having a blue whale, of course, kind of sucks, given the exhaustive amount of care it requires, and the incredible inconvenience of having to bring it to school with you and so forth. But it’s an odd way to punish a kid for not cleaning his room or brushing his teeth.

If Ms. Twitters can’t get Billy to finish his peas or clean his room, how does she get him to haul a blue whale to school with him, or feed the beast ten-thousand-gallon mouthfuls of sea water?

The narrative didn’t have enough interior logic for me to ever really buy the premise, never mind my practical adult questions or the random nature of some of the nonsense.

The pictures are really cool though, and there are some neat blue whale facts couched within the story.

While the book is a straight, illustrated-prose style picture book rather than a comic or comics-hybrid type of story, Barnett and Rex do one pretty neat thing I thought worth pointing out.

Billy’s parents appear in several illustrations, but their faces never do. These are always covered by their dialogue, which, is usually presented in the form of a comics-style dialogue bubble.

The book isn’t devoid of grown-ups, we see the faces of an old boat captain, Billy’s teacher and bus driver, and a delivery man with FedUp (Get it?), and hear dialogue from a few of the above, as well as Mr. and Ms. Twitters. So it’s not as if Barnett and Rex were striving to create a Peanuts-like world without a grown-up presence; they just keep the Twitters as faceless elements of the story. They’re not characters, so much as characters that say particular things to Billy.

Here are sections of a few of Rex’s illustrations featuring Billy’s mom and dad: 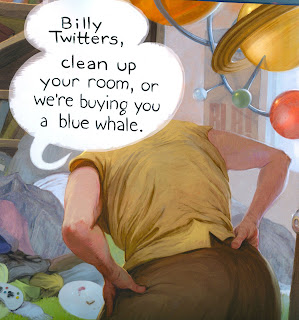 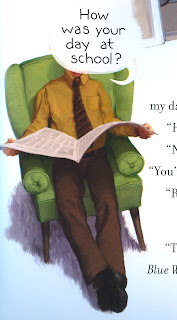 And here’s one from the title page, in which Billy’s mom storms into the first page to tell Billy to clean up his room or she’ll buy him a blue whale: