I know you'll find this hard to believe, but I've never worked on a publicity campaign for a major motion picture.

Almost two weeks ago, one of the Google News alerts I have set up to help me trawl for comics-related links offered up this short article from The Hollywood Reporter, “‘Flock’ takes flight with producers: Don Murphy, John Wells option novel.”

The Flock is a prose novel, not a graphic novel, although the fact that it got picked up sure made for an interesting little story, thanks to the manner in which the book came to the attention of producer Murphy.

Apparently writer James Robert Smith was trash-talking the Murphy-produced aesthetic crime From Hell, the awful movie nominally based on Alan Moore and Eddie Campbell’s graphic novel, on Campbell’s blog. This lead to Murphy looking into who this James Robert Smith character was, which lead to Murphy ordering a copy of Smith’s The Flock, which lead to him ending up loving it and then apparently pursuing the film option.

The role Campbell’s blog played wasn’t the only comic connection in the story. Smith has apparently also written comics before. According to the back flap of The Flock, Smith “has had his comic scripts published by Marvel Comics, Kitchen Sink, Spyderbabies Grafix, and others.” According to the hardly omniscient comics.org, these comics include Clive Barker’s Hellraiser for Marvel, and some small press stuff, including Taboo.

I was personally pretty excited to hear that announcement for the simple fact that The Flock was a book I had actually read, which was statistically improbable.

While I do read an awful lot, very little of it is fiction. Film and comics have long filled my escapism quota, and when it comes to prose I tend toward nonfiction for the simple fact that I have a harder time enjoying fiction. It’s difficult for me to read it without reading it like a critic, which isn’t really a fun way to read fiction, if that makes sense.

But I picked up 2006 book The Flock as an impulse library borrow on the strength of the cover: 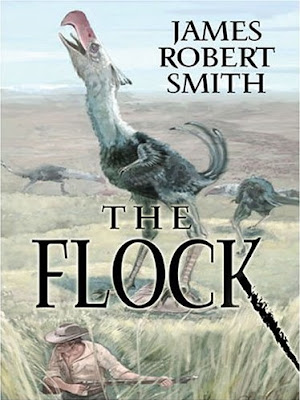 Look, it’s a big game hunter being stalked by giant-ass prehistoric killer birds! That looks like a good subject for a work of literary fiction, right?

The book was pretty different than what I initially expected. Based on the look of the dude on the cover and the blurry background, I kind of assumed it was about hunters or soldiers discovering a relict population of Terror Birds in some sort of lost world/valley/island/plateau kind of situation.

The birds are a relic population, but they live in Florida, not all that far away from humanity, although in a very specific, very undisturbed hunting ground, which allowed them to survive and continue to evolve from being the apex predators of their heyday to now being pretty much super ultra killer invincible ninja birds.

Our hero is the heroically named Ron Riggs, a Fish & Wildlife officer and pretty much normal joe. He is called in to investigate some missing pets near Salutations, Florida, one of those fake planned community places owned by off-brand Disney-like movie studio Berg Brothers.

That community is encroaching on the land that the flock of killer birds have managed to hold for their thousands upon thousands (millions?) of years now. In addition to Berg Brothers and the people building and managing Salutations, other players in the area include an eccentric retired Marine colonel who owns land nearby and eventually wages war on the flock with his personal mercenary squad, and a billionaire ecologist and his staff of environmentalists who want to preserve and study the birds.

Riggs and his ex-girlfriend pick their way through these various conflicts through about 360 super-fast moving pages. I wouldn’t call The Flock great literature or anything, but it was definitely good enough to attract a picky, reluctant prose reader like myself (one who generally turns his nose up and anything that even suggests science fiction), and keep me engaged and reading through a few marathon, don’t-want-to-stop-even-though-it’s-2 a.m.-and-I-should-really-get-to-bed sessions.

It occurred to me while reading the book a few years ago that the way it was structured and written, and the fact that it revolved around these awesome killer birds, that it would make a great movie. The birds themselves reminded me quite a bit of the raptors in Michael Crichton’s Jurassic Park novel (I used to read a lot more fiction when I was a teenager, especially sci-fi and fantasy), only they were, you know, giant birds. Their presence and the several colorful, scenery-chomping characters made it easy to imagine someone recruiting a couple of great character actors, two sexy leads, and some special effects people to turn out a decent action monster movie (Personally, I was thinking more Anaconda than Jurassic Park, but then, I was also thinking of the birds themselves as something between a Skekis and a velociraptor, and how cool they’d look in stop-motion or as Muppets; this is why I am a comics blogger and not a Hollywood producer). 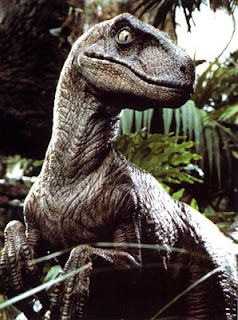 While Smith’s particular killer birds have just now been optioned for film, we have seen such birds, or close relatives of theirs, make it into film already, and the results of been pretty cool, at least in my book.

The specific type of bird in The Flock is Titanis walleri, “a predatory ground bird of saurian form.” They’re par of a group of giant flightless birds called Phorusrhacidae that existed in the Americas between five to two million years ago, although some have suggested they might have lasted up until around 15,000 years ago, around the time modern man was starting to populate the continents (give or take five centuries).

The name comes from the dude who discovered this particular Phorusrhacid, Benjamin I. Waller, and the word “titan,” as it was a pretty big bird—about eight fee tall and over 300 pounds. According to this little size chart on the Wikipedia entry for Phorushracids, T.W. was actually smaller than two other types of the monster birds. The 2001 BBC series Walking With Prehistoric Beasts (i.e. one of my favorite DVDs ever) prominently feature Terror Birds in the fifth episode, “Sabre-tooth World” (At the moment, you can see the first part of that episode right here. After the theme, they show some Terror Birds trying to chase down and eat an adorable little sabret-toothed cub). These are simply referred to as phorusrachs, and seem a little larger than Titanis, being ten feet tall, but seem pretty closely related, if a different species.

They look different than the birds on the cover of The Flock, anyway. (An earlier relative of Titanis appears in an earlier episode, “New Dawn”—the slower but similarly scary gastornis.)

The 2008 Roland Emmerich movie 10,000 B.C. prominently features Terror Birds of some sort in probably the best few minutes of that interesting but wildly uneven film. Making their way through the jungle, the heroic Mammoth hunters and their captors are stalked by a small group of giant but stealthy killer birds, that end up tearing most of ‘em to pieces. 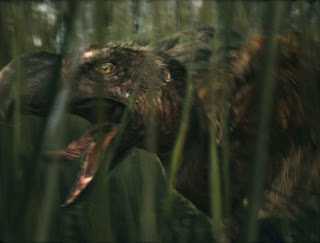 Apparently, the same sort of Terror Birds that were in Walking appear in a third-season episode of Primeval as well, but I haven’t seen past the second season of it yet.

At any rate, Walking and 10,000 B.C. certainly suggest that giant carnivorous land birds running around on film looks pretty good, so there’s some hope that a Flock movie might turn out pretty good.

Better than From Hell anyway. 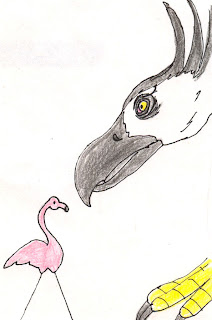 The best part of the possibility of a film adaptation of The Flock, particularly as a summer tent-pole would-be blockbuster type of film? Well, provided they’re allowed to keep the title (there’s a 2007 Lau Wai-Keung movie with the same name), there are some very exciting tagline and marketing possibilities!

So excited that I spent some time the other night drawing various Terror Birds, and ultimately broke out the index cards and colored pencils to imagine what the movie posters for a Flock movie, should it ever get made, might look like. 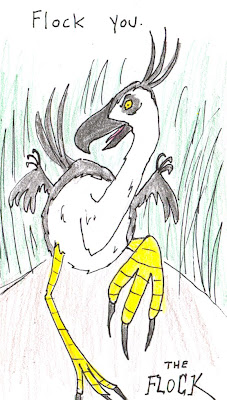 Of which there are many variations, and is so tempting a pun that you just know some film critic somewhere will end up calling the movie “A flocking good monster movie” or writing “This movie is flocking awesome,” perfect for blurbs in newspaper ads!

And of course, the studio could build up anticipation in the winter and spring before release with a tagline like this: 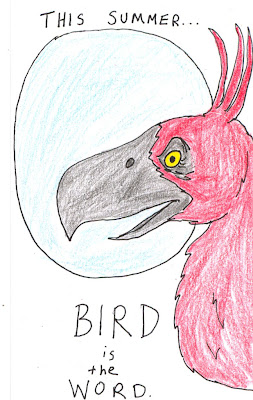 They would want to avoid actually playing that song during the trailer or TV spots of course, as it might make the movie appear too ridiculous. Save it to play over the ending credits.
Posted by Caleb at 8:57 PM

I lost it when I scrolled down and saw "Bird Is The Word". Hilarious post Caleb

"This summer, Dreamworks pictures is proud to give you...the bird."

(This tag line would also have been appropriate for Transformers 2.)