Sometimes my commenters think of much better jokes than I do. 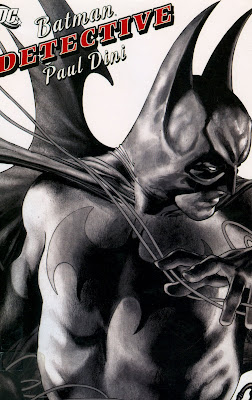 Last night I posted the above image and noted that the cover credits seemed to indicate that Paul Dini was the only creator involved, instead of being one of the two writers whose work is within (not to mention the four pencil artists and three inkers).

Reader Heather's comment was actually better than the post of mine that she was responding to: "By looking at the cover we can clearly see Paul Dini collaborated with Batman on this run of Detective."

Man, I'm blushing! Thanks for the kind words on my small joke.

But which one was the writer?

Dan: obviously Dini fleshed it out, but Batman had it all planned in advance.

If anyone knows Batman well enough to collaborate with him, it's Paul Dini.

Why could it be about the adventures of Batman and Paul Dini?