This week former Massachusetts governor and 2008 Republican presidential candidate Mitt Romney was on Meet The Press to discuss the state of the Republican Party with South Carolina Senator Lindsey Graham and host David Gregory. Looking at Romney, I couldn't decide whom he reminded me of more: 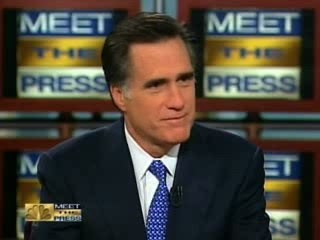 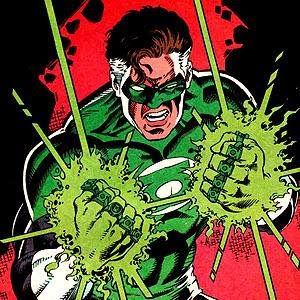 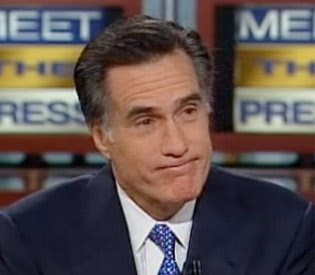 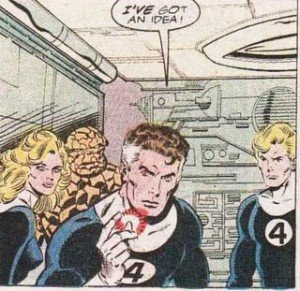 These are the types of things I think about while watching Sunday morning political talk shows.

I really liked this passage, in which Deppey answers a question about whether he would like to do more frequent longer-form reporting and/or op-ed pieces:

On the one hand, I love writing and can't seem to keep from knocking out long essays when a short note would often do just as well. (Maybe you've noticed.) On the other hand, there's always the danger of turning into a Keith Olbermann-style blowhard – or worse, a Dave Sim-style crank – if you feel obliged to keep churning out 14,000-word essays three or four times a week. This became clear to me through the course of that Mary Jane Statue fiasco a while back; the more I wrote, the more I found myself circling around to points that I'd already made. Now, in a certain sense this is inevitable in blogging. Since almost everything I write is a mildly edited first draft, I find myself narrowing in on cogent points over the course of several days, refining my arguments as I read responses and get the chance to think more about a given subject. Still, it's a gateway to intellectual stratification as well, since the further you go in defending a point, the more you feel in your bones that You Are Inarguably Correct in whatever it is you're talking about. The longer I do this, the less I trust in such positions.

There's also the fact that I only have so many things to say in a given period. The comic-book industry tends to be very conservative, insofar as it cruises along on the same set of business practices until circumstances force it from its collective lethargy. While it stands still, there's only so many ways you can describe it, and I strongly suspect that repeating yourself too often can bore a readership to tears.

Deppey expresses my own worry about blogging almost exactly. Right now I write about 14 posts about comics a week, at least a couple of which are long essays, and plenty of which are reviews, and while I love writing and like the way blogging offers a way to do it almost constantly, I do worry that I spend way too much time saying the same things over and over. Part of that is because blogging requires daily or at least daily-ish posting, and I have a tendency to resist or reject doing short, punch posts in favor of blabbing on and on for paragraphs.

Anyway, go read that interview. If you want. Sorry, that sounded bossy. If I were you, and I haven't read it yet, I would go read it.

It's pretty sad stuff, particularly coming from what I assume are superhero fans. I mean, I'm not under any illusions that a lot of superhero fans don't fall into the categories of "babymen" (to use Mike Manley's phrase) or "kidults" (to use Deppey's), but for some reason I always expect better from people who spend so much time, energy and money following the exploits of paragons of justice and virtue, you know?

Like, secretly wish Hal Jordan was your boyfriend if you want, rend your garments at plot developments you hate, and by all means, feel free to mention a comics creator, editor or company raping your childhood—fine. But complaining about the fact that there are too many black people on the fucking Justice League? And using the sorts of words and language that some of these posters do?

It makes me ashamed I even share a hobby with some of these assholes. 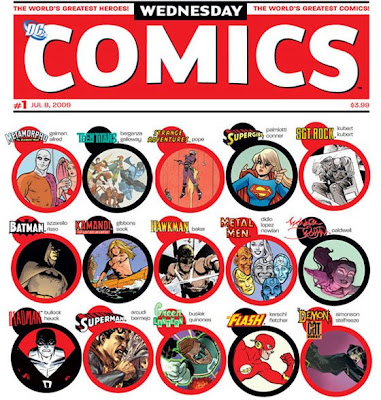 This week's DC Nation column features Wednesday Comics, DC's fascinating comics-as-your-grandfather's-newspaper-Sunday-funnies experiment. I like the newspaper-like logo, and I was really intrigued by the individual logos of some of the characters/features (Follow the link above for a bigger, better look at 'em all).

Many of them match the logos of the characters' current or more recent books (Superman, Supergirl,Hawkman, The Demon and Catwoman), while others feature classic logos (Metamorpho, Metal Men. Several of the characters have new logos (Deadman), but a couple of those with new logos are characters who are currently starring in ongoings with very different looking logos.

Don't be spreading around that Romney looks like Hal or Reed...some idiot fanboys will vote for him for that alone and then we all will suffer.

Being from Massachusetts, I would never, ever think of Mitt Romney as a superhero.