Because (one of) you demanded (well, kinda sorta asked for) it!

In Wednesday night's review post, I mentioned Spider-Man's winter gear in Amazing Spider-Man #615, and commenter "Kid Kyoto" commented that he or she (or possibly it?) wanted a scan of Spidey's winter wear.

I am happy to oblige. Here's one: 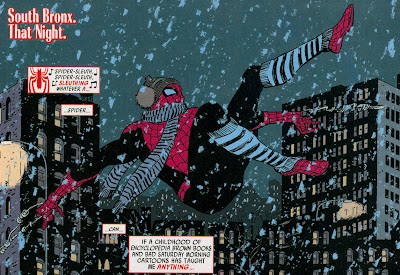 That image is drawn by Javier Pulido and colored by Javier Rodriguez; Fred Van Lente wrote the issue, so maybe he gets credit too, depending on what the script said about dressing Spidey.

I can't say enough good things about Pulido's work on this issue—if the book looked like this each week, and were written at least this well, I wouldn't dare miss one.

Anyway, I've been contemplating Spider-Man's winter gear for a few days now, and at first I wasn't sure why he didn't wear gloves or boots, but now I think maybe it would have interfered with his sticky powers somehow...? Like, he's already sticking through his costume, maybe sticking through the booties of his costume and a pair of winter boots would be impossible.

Whatever the reason, that is an awesome costume update, and an awesome drawing of it.

The scarf performs other functions aside from keeping our hero toasty and making him look a little more visually interesting than usual (not that there's anything wrong with his regular costume, it's just kind of neat to see him wearing something different, you know?) For example, the scarf really draws attention to his hanging upside-down, when he's standing on the ceiling: 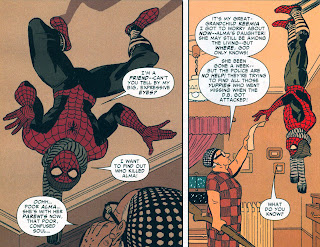 It also jazzes up action scenes a bit, giving the usually sleek Spidey something hang-y to whip around when he's fighting: 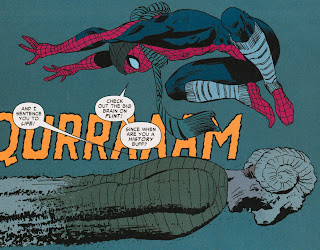 Yes, this is a great look for Spider-Man, and Pulido draws one great-looking Spider-Man. I could basically scan any panel of the book and just say, "Look! Look at how cool that is! Check out the way that panel is organized, let your eyes drink deep of that line work!"

I'll just do two more, which I think do a great job of depicting the freedom and fun of Spider-Man's powers, as he flings himself through the sky, and then gets all creep-crawly around a window: 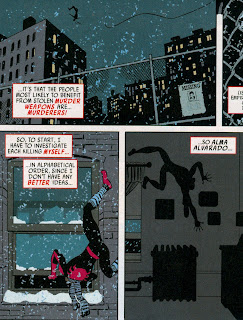 So that's what Javier Pulido's Spider-Man looks like. Please give him a 500% raise and have him draw every single issue of Amazing Spider-Man that Marcos Martin or John Romita Jr. don't, Mr. Stephen Wacker, sir.
Posted by Caleb at 9:11 AM

That's some mighty cool artwork. Spandex is still mighty thin to be wearing while swinging over the streets of New York. Can't he take a hint from Adam West and wear some Spider-Thermal Underwear?

You're right about gloves and boots interfering with his wall-crawling. The more layers between his skin and the surface, the harder it is to stick. Also, I think gloves might get in the way of his web-shooting.

That is some outstanding artwork.

That really is awesome, thanks Caleb!