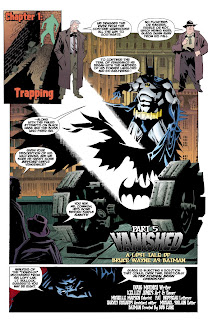 This is, somewhat sadly, the fifth and final issue of the Doug Moench/Kelley Jones/Batman reunion project, but at least they saved some of the more awesome visuals up for this final, climactic issue.

That page up there is the very first one, a scene in which Batman alternately gestures operatically at Commissioner Gordon and Harvey Bullock as they stand beneath him and just relishes in straddling the bat-signal, the huge column of light shooting between his legs and into the night sky.

Later, Batman takes the “Translux” invisibility serum that Invisible Man Nigel Glass has taken in order to…well, something about a psychological edge I think, but the main point seems to be so that Jones can draw an invisible Batman, clad only in cape, cowl and gloves. 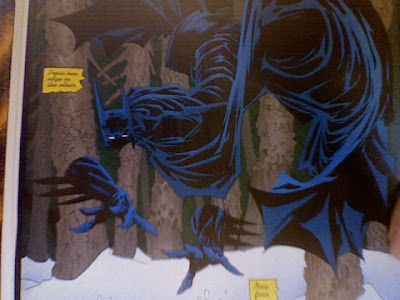 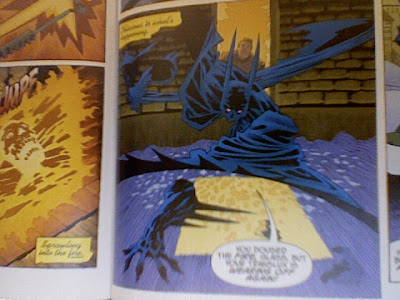 It also means that Batman spends half of this issue running around completely naked, save for his cape, cowl and gloves. Later, he’ll lose even those for a completely naked bit of hand-to-hand violence with Glass.

No word on whether or not either of them were greased this time.

Blackest Night: The Flash #1 (DC) You need to do two things to enjoy this comic book. First, you must know a lot of shit about The Flash and DC Comics, enough that you know the difference between, say, The Flash II, The Flash III, The Reverse-Flash I, The Black Flash and a Black Lantern Flash. Second, you have to not think too much about where this fits in relation to other DC comic books.

That second one is sort of tricky, since this is a tie-in to another DC comic book, and follows hot on the heels of another DC comic book, but, you see, this story is a kinda sorta sequel to the Flash: Rebirth series, and DC has finished that seires yet. So it’s based on continuity that’s still somewhat fluid, or at least unknown to readers, and it runs more or less concurrent with Blackest Night #1-#4 or so. I guess.

Fuck, I don’t know. I’m sure Geoff Johns has a timeline somewhere; he’s writing all three of these things, and while some of the events here seem incompatible with what The Flash has been up to in Blackest Night (hanging out with Hal Jordan and then Mera and The Atom II while they fight off Black Lanterns), he is super-fast…I guess he can make time to run off and have a whole three-part miniseries between the panels of Blackest Night.

So. Geoff Johns re-teams with his former Flash partner Scott Kolins to check in with various Flash characters during the events of Blackest Night.

There are some rather tedious recap sections—two pages on Barry Allen, a page on King Solovar, half a page on The Reverse-Flash— and I had some trouble making sense of the state of The Reverse-Flash, given his status in Flash: Rebirth #4, but the book certainly has its strong points, too.

Like, there’s a zombie gorilla, for example, and Kolins draws a pretty cool panel of Barry’s eyes finding a vibrational frequency that will allow him to see Gorilla City (I like Kolins’ various Flash effects a lot better than Ivan Reis’ in Blackest Night in general, actually; that second, ever-present after-image gets on my nerves).

And I have to admit, the last panel of the Rogues posing and declaring their intent to go fight some Black Lantern rogues—including the only Black Lantern I asked for to actually appear so far—above a a “Next: Black Lantern Rogue War” struck me as pretty damn exciting.

I don’t know if this was actually a very good comic or not, but I’ll be damned if I didn’t like it anyway.

Blackest Night: Wonder Woman #1 (DC) I was kind of curious about where this miniseries would start, given the rather dramatic—if temporary—change in the title character’s status quo at the end of last week’s Blackest Night #5. It turns out returning Wonder Woman writer Greg Ruckas—totally stealing a sweet, sure-to-get-a-ton-of-royalties writing gig from regular WW writer Gail Simone—starts the action just before BN #5.

The downside of the script is a rather bizarre deus ex machina ending, in which Diana’s lasso is used to shoot some kind of super-light I wasn’t aware it had the ability to do, and the fact that the lead is written as the most insufferable fictional character imaginable, narrating and speaking only in platitudes. She’s just all “Love can’t be taken-- Only given” this and “Love is light” that (Oh wait, maybe I just got it—did Wonder Woman just love so hard that she made an atomic blast of love-light through her lasso…?)

The script isn’t that important though…not really. What makes this issue of “What was Wonder Woman doing between the pages 1 and 20 of Blackest Night #5” worth reading is Nicola Scott’s art.

It’s great, great stuff—probably the best Wonder Woman art I’ve seen since…well hell, I don’t know. I can’t remember the last time I saw an issue of a Wonder Woman comic that really knocked me out. Scott’s working with four (4) different inkers on this thing (Jeez, do you think they decided to throw this miniseries together at the last minute or anything?), yet it holds up remarkably well, based on the strength of Scott’s storytelling, design and just plain old drawing chops.

I’ve discussed my admiration of her work before, and I’m really glad she’s getting the opportunity to draw such a high-profile book for DC. According to the latest charts, only a little over 23,000 people read her Secret Six each month, and Scott’s an artist who deserves a lot more eyeball’s than that.

Empowered Special (Dark Horse Comics) Damn it, I'm going to end up wishing I didn’t buy this when the next volume of Empowered comes out and I see this special, comic book-format one-shot issue is included as a chapter of it, and I realize I paid twice for the same content.

This book, one of Dark Horse’s recent spate of one-shots introducing characters and concepts to potential new readers, is black and white, like regular Empowered stories and, more tellingly, is printed at smaller-than-an-average-comic, closer-to-the-Empowered-trades dimensions of nine-by-six-and-a-half inches.

The story, “The Wench with a Thousand Sighs,” splits the action between Empowered battling a typically clever-but-goofy supervillain (Irrestimmovable) in a superhero mausoleum and the “caged demonwolf” teaching Thugboy and Ninjette what he’s learned can be learned from the various types of sighs Emp emits.

As an introduction to Adam Warren’s Empowered series, it does a pretty good job of introducing the characters and tsense of humor. What it doesn’t do is give a very good sense of how good the book actually is, since the limited space doesn’t allow for the demonstration of Warren’s characters and the complexity of their relationships.

So if you do make this your first exposure to Empowered, rest assured that it’s actually even better than it may indicate.

With Jeff Parker writing and Paul Pelletier penciling, the line-up was more than enough to get me to plop down my $3.99 (for 31 story pages, plus some Marvel Handbook filler in the back). In addition to The Leader, we’ve got Doctor Doom, M.O.D.O.K., The Wizard, Egghead, The Mad Thinker (with Awesome Android) and The Red Ghost (with Super-Apes).

To be honest though, it’s a very odd book. It spans years of Marvel continuity, and introduces plenty of characters, but where exactly it’s all going and what “Fall of the Hulks” is supposed to be exactly doesn’t become clear until the ending, where—spoiler alert!—it’s made clear that The Leader’s group is responsible for the creation of The Red Hulk.

Parker does a good job of moving the plot through the book, and pausing to introduce each new villain pretty thoroughly, to the extent that the Handbook pages in the back are pretty redundant, but there’s no real story being told. It’s fun, colorful, well-drawn set-up, but it’s still just set-up. Of course, this is the first item on a “Fall of the Hulks” checklist that has 11 more books on it between now and March, so perhaps complaining about the prologue being little more than prologue seems silly. Still, it didn’t do much to interest me in check ing out the next item on that list, which is written by (gulp!) Jeph Loeb. 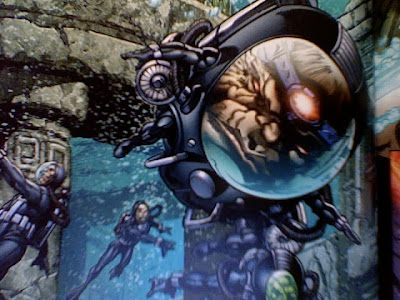 If they were only fighting SHIELD in that panel, it would have been the acronym-iest splash page ever!
Posted by Caleb at 4:45 PM

According to Adam Warren's website, 'Wench With A Million Sighs' won't be in the next collection. It should be in the one after that.

I wasn't going to get sucked into Fall of the Hulks, having been burned once (twice, thrice) too many times by Marvel Events.

And then I saw that panel.

(I'm only damning you because you post your rundowns before Sims, or he would be feeling my wrath of pocketbook. Because we all know he'll be squeeing over that panel, too)

as totally badass as an "invisible" batman looks it does seem rather pointless if you've still got your gloves and mask on and your 50 ft cape flowing behind you.


but i'm sure wayne has his reasons.