Three questions I had after reading Icon: A Hero's Welcome 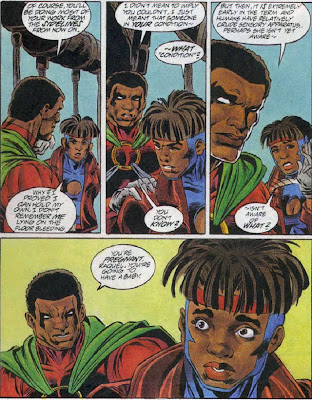 1.) What's up with Icon's mask? It is a little mask; there are a few panels where they show him either taking it off or putting it back on, and it's a tiny, rather stylized domino mask that covers both of his eyes and stretches across the bridge of his nose. But when he puts it on, the middle of it completely disappears, and it simply looks like he's wearing eye make up, or little mask-patches over each eye. Is his mask made of some sort of alien material that makes the middle of it disappear? Does he knit his brows so intensely that part of his forehead completely covers the middle of the mask? Or does pencil artist M.D. Bright just never draw it as some part of the intentional, stylized exaggeration he brings to the work (like how Icon has a cape big enough to smother Spawn and Kelley Jones' Batman)?


2.) Is Reginald Hudlin's introduction as embarrassingly terrible as I think it is, or am I being too harsh in my assessment? If you haven't read the new-ish Icon trade (and I think you should all read it, if only to encourage DC to put out more trades of it for me to buy), here's a sample:

Some of you might sneer at attaching such importance to creating comic books (it shows a certain success for Milestone that you are reading this introduction, anyways), but for people who have suffered with "a dream deferred" for too long, having our collective fantasies delineated and distributed across the country is empowerment indeed.

But none of that would matter if the books were wack.

The whole thing is so exciting, I even considered quitting my day job to join Milestone. But then, I thought, how will I make the movie version if I quit directing?

3.) Here's a hard one: Is Icon black? When we first meet the being who will become Augustus Freeman/Icon, he's a blue-skinned alien. When he lands on Earth in the second half of the 19th century, he is transformed into a little black human baby.

He later explains that the lifepod worked to alter his DNA to "match that of a sentient native."

So, is Icon really black, or is he just a blue-skinned alien disguised as a black man? The fact that his disguise is based on altered DNA would seem to indicate that he is, for all intents and purposes, actually a genetic match to the woman who found him—and African-American slave in the American south of the 1860s—yet he seems to be functionally immortal (he's over 120 when we first meet him), and has all sorts of superheroes, so he's clearly not an exact DNA match of a human being.

Ultimately, it doesn't really matter. Superman's not technically human at all, yet he's usually considered to be white based on the color of his skin, rather than his genetic make-up. Likewise, Icon's black based on the color of his skin...he identifies himself, and can be identified as, African-American, even if he didn't actually come from Africa, nor did his ancestors (Actually, I guess that makes both Superman and Icon Outer Space-Americans, huh?).

I was only curious about this at all due to the relative dearth of good black superhero comic book characters throughout the history of the medium. Icon's a great character—and Icon is a pretty great comic book—but I was wondering if he can technically be considered black or not, based on his origins, if he is indeed an answer to the question, "Where are all the great black superhero characters?"

I suppose if we consider alien Superman, Atlantean Aquaman and magical clay golem Wonder Woman white folks, than Icon is a black man. Anyone have any thoughts on the matter?
Posted by Caleb at 8:37 PM

I think it's precisely because they look like their race and creed, that it's simpler for them to represent said background in stories.

I mean people may sometimes forget that Superman is an alien, but they're always going to think of a white man with black hair when it comes to visually picturing him. Also, let's not forget that one "Beyonce as Wonder Woman" hubbub/uproar.

He theoretically creates a superhero role for a black actor to play, at least.

Certainly, surface appearance is enough for most Earthlings to assess him by race, for whatever assessments they might make. Even people who know he isn't 'really' black might have to face their own idea of 'real blackness', and that they have one.

I haven't read this series, so I don't know whether it's in a style that supports much subtext or character study, but if it were, the point you mention could be quite a good one for addressing concepts of race as internal identity vs. social experience. If not, eh well, guys punching stuff is fun.

the point you mention could be quite a good one for addressing concepts of race as internal identity vs. social experience.

If theres one thing Icon does as a book its that. Taking a deeper look at racial, social, culutural, etc issues using super-heroes was a central part of the whole Milestone line...

He's black. Because partly it's a joke: only an alien would be a black Republican. Buh dump ba.

Maybe that's just my sense of humor. When it came to this title, I always found the debate over who the real title character is more interesting. To me, Raquel is the real Icon.

Well, the Superman argument is a little more complicated since Superman was born white, while Icon was born blue... on the other hand, Icon has lived and been treated as a black man for 120 years, through the Reconstruction and Jim Crow and Civil Rights, so... I figure his experience alone is justification enough to be able to call himself black.

I was going to say something like what Esteban says. The "he's not black because he was born blue" seems to me pretty decisively outweighed by "he lived more than a century as a black man in America."

In any case, he's not "just a blue-skinned alien disguised as a black man," because the disguise isn't one he can take off. And once Raquel discovers the truth, she doesn't start treating him as an imposter or a poser.

I guess the answer is: since race isn't a biological fact about which there's some truth of the matter, but a social fact, the only really relevant measures are whether the person's treated as a race-member by fellow-members and by non-members. Augustus is treated as black by both black people and white people; I think that's about all there is to say.

Unrelatedly:
Back when the Morrison JLA was prompting boring online debates about what "iconic" meant, I kept wanting to quote the exchange between Augustus and Raquel from issue 1.

Being Caucasian on earth is probably at least slightly different from being Caucasian on Krypton. The real reason why Superman would be considered white shouldn't be because that was his primary appearance, but because of the way he was raised. Just like your case for Icon, he lived the experience, and the fact that he looked the part only served to help that, but shouldn't be the primary justification for his assuming that role.

That being said, I doubt Superman will take a pro-Caucasian sided stance any time soon not just because there really isn't any since it's not a minority (and thus it'd be tacky anyways) but because of his ideals and ethics it probably wouldn't matter to him. I personally would argue that even if Superman was a minority, he would still stay out of race issues but that's another discussion.

At a blacks in comics panel at a convention years ago when Milestone had just been launched, a young black guy in the audience argued that Icon wasn't really black precisely because of his origins as a (permanently) shapeshifting alien. To which one of the Milestone founders--Michael Davis, I think--retorted, "He's been black longer than you have."