How The Warlord got his tiny little costume 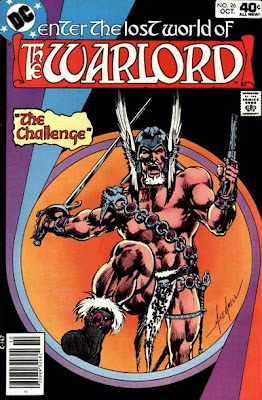 Travis Morgan is famous for many things: Repeatedly defeating the devil priest Deimos, bringing gun violence to the lost world of Skartaris and striving valiantly to popularize “The Green Arrow” as a facial hair arrangement. But perhaps Morgan’s greatest claim to fame is his tiny, tiny costume.

Sure, female superhero characters are prone to wearing scanty, barely there costumes, but male heroes generally get better coverage. Morgan, on the other hand, may just be the most scantily clad hero in comics. If you count his helmet, bracelets and boots, he may have more surface area covered than the famously near-nude Namor, but without his accessories, Morgan has naught by a sliver of snow leopard fur to maintain his dignity.

Why does the man known as The Warlord dress like this? I used to think it was merely the style in Skartaris, the bizarre world within the hollow center of our own earth, where there is eternal sunlight. It’s obviously pretty hot down there, as everybody goes about wearing as little clothing as the Comics Code Authority would have allowed them to.

But then I sat down with Showcase Presents: The Warlord Vol. 1, and was surprised to discover that when Morgan first arrived in Skartaris, he wore a pretty modest outfit that covered most of his body: 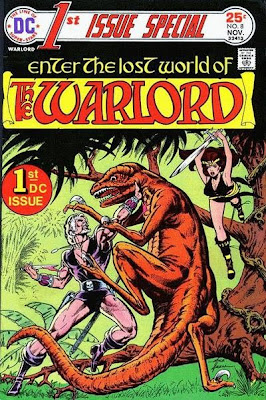 It wasn’t until the ninth issue of his series, 1977’s “Lair of the Snowbeast,” that Morgan would adopt his better-known, hardly-there costume. And the circumstances under which he acquires it were most unexpected. You see, he exchanged his blue onesie with boots and skull-belt ensemble for a loincloth while in the snow—to keep warm.

Here’s how it happened.

After having escaped from a lonely, lustful android atop a floating island via homemade hang gliders, Morgan and his traveling companions Machiste and Mariah found themselves trudging through a blizzard in a rare, snowy area of Skartaris.

As you can see, Morgan was dressed rather warmly at the beginning of the adventure. 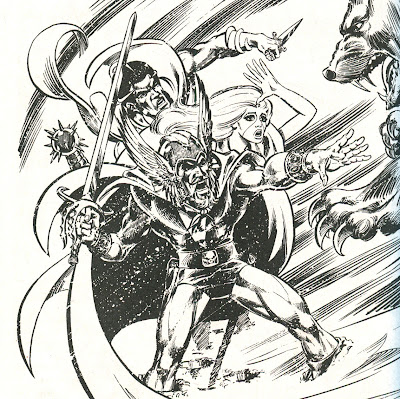 They soon ran afoul of a dread megalictis. These beasts were prehistoric predecessors of the modern wolverine, and they were the best they were at what they did in the Miocene period.

Morgan draws his sword and meets the beast’s charge, but his clothes don’t survive the encounter intact:

Morgan rallies, however, and puts seven shots of his .44 magnum into the back of it’s head at point blank range. This was early in the wolverine’s evolution, before they had acquired adamantium skulls, and that amount of head trauma overwhelmed the monster’s natural healing factor, killing it dead. 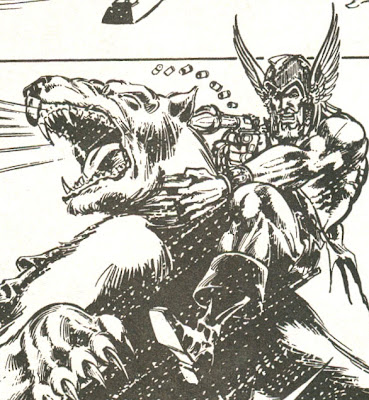 His foe finally vanquished, the Warlord collapses under his own wounds, and before Machiste and Mariah can even attend to them, they are captured by some wooly mammoth-riding jerks. Morgan is left for dead.

But he doesn’t die easy! He eventually rouses himself and tries to stumble onward, but collapses once more. This time, he dreams that a naked, scaly, butterfly lady lifts him in her arms and flies him to safety. 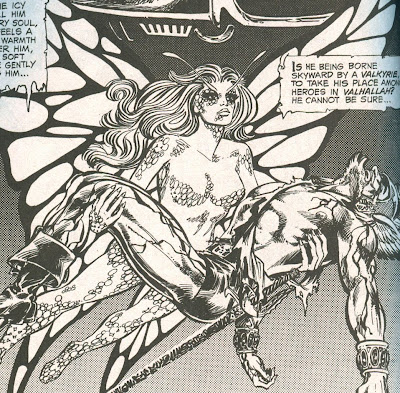 When he awakens, he finds himself naked in a warm cave. His wounds are healed, but his tunic is no more. As he ponders what must have happened to him, the owner of the cave arrives—a yeti! Morgan and the yeti do battle for a bit, before he looks into her eyes and sees it was this she-squatch who saved him. 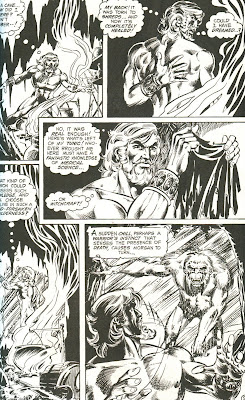 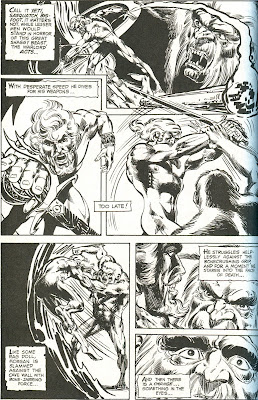 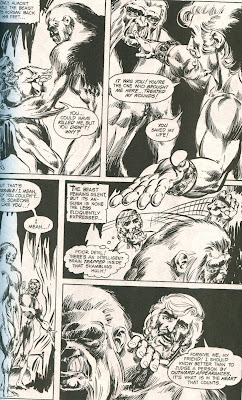 After the two work things out, she points him to the citadel where his friends are held captive, and Morgan looks for something to wear. 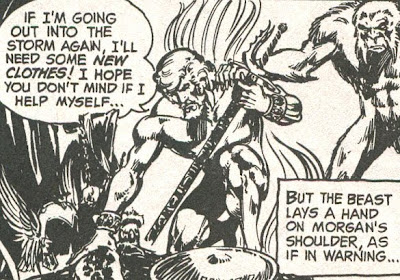 Yes, he’s about go back out into a blizzard and will need clothes to keep himself warm…and that is how he arrived at his current costume, a tiny fur loincloth:

Well, I’m sure his penis, right shoulder and legs from the shins down are toasty now…

Oh, and how do his friends make out? Well, they’re tied to a poll being danced around, about to be sacrificed or eaten or something, so Morgan swings in and starts killing people. Seeing things going badly for our hero, the abominable snow-woman joins the melee, helping him kill folks. Machiste, mistaking the snowbeast for the unfriendly sort of snowbeast, hurls a spear into her.

The creature dies, and Morgan sheds tears: “Why? Why did you have to kill it? It was only trying to save me!”

But out of the dead beast rises the naked, scaly, butterfly woman— 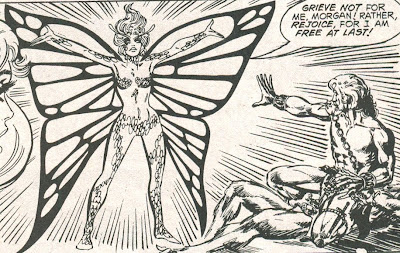 —who explains that she was cursed and placed inside the body of the yeti until someone came “who could see beyond the ugly exterior of the beast to the beauty within” (and someone else killed her with a spear). 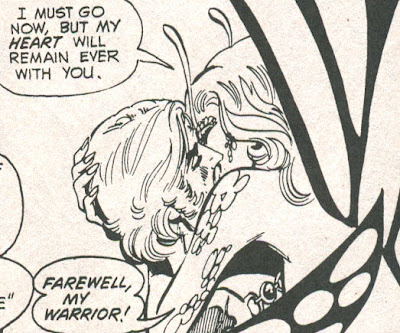 She plants one on Morgan’s mustache and then takes flight, leaving The Warlord, his friends and his loincloth ready for their next exciting adventure in the world of Skartaris.
Posted by Caleb at 7:56 PM

The Wolverine thing was very funny. As for the rest, it's downright bizarre, but no more than 1980s Ka-Zar featuring "Dante's Inferno" as re-imagined by Bruce Jones and Bret Anderson in Savage Land.

The Airforce should do more using The Warlord. You don't see the USMC John Stewart trudging thru miles of sub-zero blizzards dressed in a few scraps of fur. Or Captain Atom. Who was Army I think? And does the Navy even have anybody? I mean other than that dude with the wooden leg who was part of The Losers...

Damn, I need that book. I was introduced to Warlord as a kid through a Blue Ribbon Digest condensing the Deimos saga to 100 pages, and that's still one of my favorite reads. But it didn't have this one!

I like the new Warlord book all right: it's not reinventing the wheel or anything, but it's a bazillion times better than the Bruce Jones revamp...

Rick Vietch did a riff on this sequence in Army@love, I don't have the book in front of me, but I think he might of actually referenced the layouts.

you sir just sold a copy of Showcase Warlord. Cause honestly, this is the sort of madness I can get behind.