Yesterday DC had a pretty big press roll-out of next spring’s Batman: The Return of Bruce Wayne series, with writer Grant Morrison talking about the series with USA Today (Here’s The Source announcement, with a link to the interview).

Part of that announcement included releasing artist Andy Kubert’s designs for some of the period costumes Batman would be donning while traveling through time. 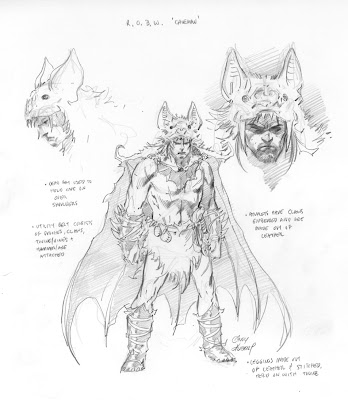 Back in February, I did a goofy little post on Blog@Newsarama.com in which I pretended to have found Morrison’s notes on Batman: Year One Million B.C.*, and included this costume design: 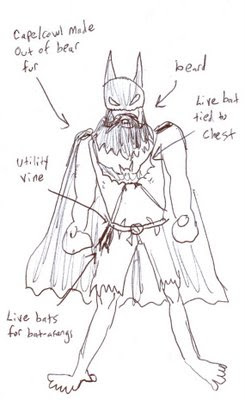 Okay, obviously Kubert’s is about one million times cooler, and about ten million times better drawn (Jesus, I gave Batman’s right foot six toes and some kinda monkey thumb), but note the bat-symbol on each of our prehistoric Batman designs.

Of course, mine specified that the bat was a living bat tied across Batman’s chest, whereas Kubert’s Batman is wearing a dead one.


—I dug this post on Comics Should Be Good showing seven different comic book companies’ seven different takes on Hercules, star of Marvel’s best superhero comic. I was quite surprised to see the Gold Key’s The Mighty Hercules, which looks so much like Bruce Timm’s work I would assume it was Timm’s, were it not for the 12-cent price. (Here’s another; Timm seems to have learned to draw his pretty girls from someone or somewhere else, but that Herc totally looks just like his Superman and Batman).

Oh, and the A-Plus Comics cover, in which Herc and the Nemean Lion are cuddling, is pretty sweet too.


—Hey Columbus readers, recognize either of the names in the byline for this Paste magazine best of the decade list?

*Note: This is still an awesome title. Think One Million Years B.C., but with Batman, fighting dinosaurs.
Posted by Caleb at 11:28 AM

Um, I'm pretty sure that the Earth-One books are supposed to be in a separate shared and modern continuity, so if All Star Wondy is already underway writing-wise, they'll either just release it under that banner or do some re-writes to fit it under the Earth-One continuity.

I'm banking on it still being All-Star though, because the Batman and Robin the Boy Wonder title still hasn't finished publication. Plus, it'd be much more interesting to see a modern interpretation of Wonder Woman than try to make Adam Hughes shoehorn his presumably over-sexed version into that mold.

just another reason why you should be writing comics instead of just writing about comics.

I like that you made it a living bat, though. Poor little bat.

Yeah... Adam Hughes Wonder Woman is "well underway" in the same sense that Dr. Dre's "Detox" will be hitting stores any day now.

Also,let me second my love for the live bat on Cavebat. That might be the coolest thing ever.

Your feet are better than Liefeld's, at least...

Should Bruce really be killing bats in the past? For all he knows, that bat is the ancestor of the one that crashed through his window and inspired him.