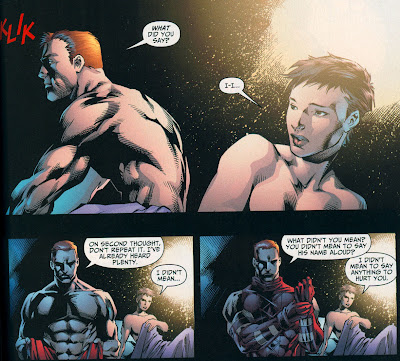 ...his ability to put on his costume really, really quickly. He got his shirt, arm stockings and gloves on all in the space of a second! No wonder he used to go by the codename Speedy. (Well, he either put his costume on really fast between that second and third panel, or else he spent a really long time thinking of a retort to Hawkgirl's unfinished statement in the second panel).

(Panel from Justice League of America #27, written by Dwayne McDuffie, pencilled by Ed Benes and inked by any one of four different inkers)
Posted by Caleb at 6:44 PM

Wait, that's Hawkgirl? I thought he was sleeping with a teenage boy.

If he's THAT fast, no wonder she's calling out Hawkman's name!

It really looks like he snapped her neck in that first panel.