Of course She-Hulk is stronger than Iron Man. But there's no way she woulda beat The Hulk. 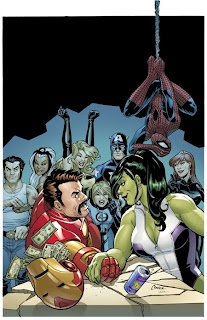 Marvel gave the exclusive announcement to Heidi MacDonald, a known woman, so you should go read her interview with editor Jeanine Schaefer at The Beat...and stick around for the lively comments section, which should feature some familiar names chiming in.

Okay, are you back yet? Great, welcome back! I had some thoughts while you were gone.

—Yes, the title is lousy. While it shouldn't be too hard to think of a better one (Stan Lee's Sister? Marvel For Her? Cooties Comics?), they could have picked a much worse one (Note, for example, the lack of the words "vagina" or "dames" or "diva" or "girl power" or "girl superpower" in the title, or a play on the word "monthly"). In The Beat comments section, knower-of-things Douglas Wolk points out that Girl Comics is actually the name of an old Marvel/Atlas comic series.

So maybe this project isn't really about promoting women in comics after all...maybe it's just an exercise in copyright or trademark renewal, like when Marvel occasionally publishes something random with one of their cowboy or monster characters?


—A lot of the comments I've seen today have predictably talked about reverse sexism, the ghettoization of female creators, that the book's existence is a somewhat sad fact in that it highlights the need for books like this just to get a bunch of women working on Marvel Comics, or that it would be better news if some of these creators were announced as parts of creative teams of some of Marvel's regular titles.

I suppose there are arguments to made about some of those charges, but, as a comics fan, what I see when I look at the announcement is a book with some of my favorite creators on it, including several creators from my own personal "I'll buy anything that this person does" list.

I'm down for anything that has Jill Thompson, Colleen Coover and Amanda Conner involved, for example, or anything that gives Ming Doyle, Molly Crabapple and Carla Speed McNeil access to the Marvel characters to play with.


—That Amanda Conner cover sure is awesome (Tony needs to shave though—STAT!, but I was surprised to see it though. How is it that Amanda Conner isn't exclusive to DC? She's drawing a monthly book for the publisher; if she still has time to draw more things beyond Power Girl, then DC really oughta get her some more work. Their superhero line needs as much Amanda Conner as it can get.


—Also, G. Willow Wilson is writing a monthly for DC's Vertigo imprint, and has dabbled in their superhero line, often with surprisingly good results (By which I mean she wrote something called Outsiders: Five of a Kind—Metamorpho/Aquaman and it was surprisingly unterrible). How come she's not exclusive to DC? Someone at the company better be drawing up some paperwork after seeing this announcement...

There seems to be a lot of venom on the Internet regarding Grayson though, especially for her handling of the title Nightwing, which I don't understand. I only lasted about four or five issues of her Nightwing, and no, it wasn't any damn good, but it was a Nightwing comic. They're never any good. I don't think I've ever lasted more than four or five issues of anyone's run on Nightwing without extenuating circumstances (Like, say, Rags Morales drawing it).

Anyway, I just wanted to take a moment to say "Yay, Devin Grayson!"


—I assume this is more of a just-something-fun-to-do sort of project than an honest outreach to attempt and win over a whole new demographic for the company. I've heard a few people mention Minx already, and this seems like a completely different thing. With Minx, DC was trying to create comics outside of their superhero universe specifically targeted at comics evangelism for young, female YA fiction readers (They also seemed to be trying to create their own niche with a sort of original graphic novel line that distanced itself from associations with both manga and Western super-stuff).

This sounds like it's just going to be Marvel superheroes by lady creators.


—This is practically guaranteed to sell like hell. Marvel's various attempts at anthologies always sell terribly in the direct market...even Strange Tales, which had some of the best and most successful cartoonist you can think of working on it, sold poorly in the DM. When it comes time for Marvel to assess the book's performance, I hope the bean-counters keep that in mind, and that no one in editorial jumps to the conclusion that the low sales are specifically the fault of any of the particular creators involved.
Posted by Caleb at 3:13 PM

I agree, JLA/ Titans was great. I only read the first issue of the Titans book that spun out of it, but that issue was pretty good as well. "Girl Comics" sound like it will good. Now let's hope it's affordable

I wish it was called "Vagina Dames"

Your title made me try and think if there are any female superheroes who are "the best-est" in their field in the Marvel universe. As you said, Hulk is stronger than She-Hulk, the smartest people are all men (Reed, Amadeus Cho, Tony Stark, Hank Pym). I can't think who's the fastest Marvel hero.

I guess you could argue that Jean Grey is the most powerful mutant though, so, er, my point has been lost in some sort of mess of making lists. Sorry.

Anyway, I thought I'd post this on a newer thing in case it got lost, after reading people arguing about McDuffie's JLA run and how he should have just written stories using the characters he had I thought this was interesting (he posted it on a message board today): "I could complain about ... *every* issue I wrote having to be altered mid-stream by a storyline in another book (except the Flash Wonder Woman team up)"

I'm sure he could have written good comics featuring whoever if he'd just been left alone.

Seconded re Grayson. I still have a ton of goodwill toward her for the reasons you mention-- and I always liked her sheer enthusiasm.

I think the JLA/ Titans mini was a terrific use of the whole DCU as it then existed (in that Morrison-created, pre-Meltzer, pre-Johns moment).

I don't know where I LOLed hardest, "a known woman", "Cooties Comics" or "monthly".

I'm not a fan of anthologies, but the sheer number of awe-inspiring names behind this book is tempting.