Some negative thoughts about some super-comics stuff

I saw this ad in the only Marvel comic I bought this week: 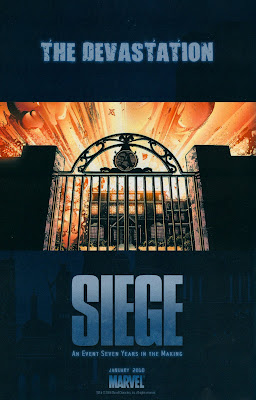 Seven years in the making! Wow! Can you believe it? Brian Michael Bendis, one of the most prolific comics writers working for the Big Two, has spent seven solid years toiling over the script for this four issue miniseries! And Oliver Coipel has been working on the pencils for seven years! I expect the text to be as dense and thoroughly researched as From Hell, and the art to be so detailed it will make George Perez look like Randall Munroe!

Okay, okay, obviously the ad means the story being told in Siege will feature the culmination of events that Bendis has been slowly moving towards for about seven years now. But that’s not what it says.

I suppose the thought is that “seven years in the making” will help sell the series as a big deal, but I wonder if it’s not simply priming the market for a bigger-than-usual backlash against the event. Secret Invasion seemed incredibly disappointing to me, in large part because it was the culmination of five or six years worth of Bendis’ Avengers stories. With that much build-up, you need an awful lot of blow-up, and seven issues of Secret Invasion included very little of that (Mockingbird and Spider-Woman come off a spaceship, Norman Osborn shoots a Skrull gal in the head before Iron Man can and…well, that was it, wasn’t it?). That was seven issues long; Siege is only four issues—is that big enough to contain a big enough climax to a seven-years-in-the-building-up story?


—Did any of you read Siege: The Cabal #1? Yeah, me neither. Well, if you didn’t, Newsarama also presented the six-page preview of Siege #1 that was included in the back of Wednesday’s special, and you can read it here.

It’s pretty terrible. Clearly Bendis hasn’t spent the last seven years writing the series, as those six-pages read exactly like everything else Bendis has ever written for Marvel, with the Bendisian conversation laid atop an Asgardian equivalent of the Stamford incident at the beginning of Mark Millar’s Civil War.

I have to admit though, I’m somewhat intrigued by the thought of Volstagg the Voluminous getting a Penance-style makeover as Speedball did during Civil War, complete with a brooding, bad-ass attitude and an S&M-inspired new costume.


—Yesterday on DC's The Source blog, the publisher unveiled the cover of the first issue of their upcoming First Wave series/event, in which they create a new DC Universe populated by a grab bag of characters taken from the pulps and less superheroic comics. It's by J.G. Jones, who is a hell of an artist, but, like the cover of the prelude Batman/Doc Savage Special, it strikes me as kinda lackluster for some reason.

Maybe it will look better once they add in the title and such, but I was expecting something a little closer to the publisher's 1997 "Pulp Heroes" annuals, in which each annual featured a pulp mag-inspired cover, like these beauties: 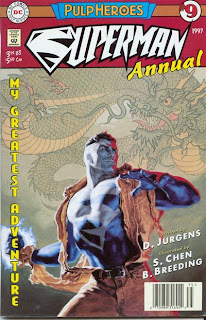 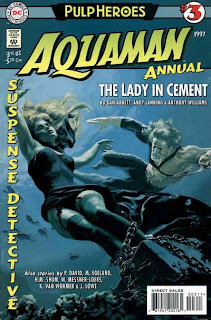 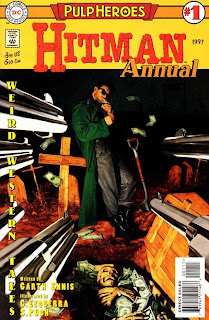 —Speaking of announcements on The Source, there's also this thing about the future of Adventure Comics, which launched as a Superboy (in the lead feature) and the Legion of Super-Heroes (in the back-up/second feature spot) book. As far as I can tell, it looks like it's going to transition into an all-Legion book, with the different features focusing on the characters in different time periods, it will be written by some of the Superman writers and it will eventually lead into a big Superman event running through most of the Super-books. (Robot 6's JK Parkin parses the announcement a bit here).

I'm just a single reader, so I'm just offering this as a single instance, an anecdote rather than a sweeping statement about such crossovers, but, for me personally, the last book-to-book continuous Superman story arc—"The Hunt for Reactron" or "Project: Patriot" or somesuch?—bounced me out the Super-books entirely. I had previously dropped Action, decided I'd read Superman: World of... in trade paperback and was just sticking with Superman. I took its tie-in issues off, and realized I didn't miss the book one bit, so I just dropped it completely.

I'm already gone, so while the next triangle-style crossover between the books doesn't entice me back, it won't re-drive me away either. I do hope DC realizes that every opportunity to bring in new readers is also an opportunity to drive away current ones...even if "driving away" is merely a matter of driving them away from single issues and towards trades.


—After reading that, I reorganized the shelves where I keep stacks of the books I'm currently reading a bit, and I finally moved the Action and Superman stacks into the comics midden dominating the corner of my bedroom. In doing so, I took a closer look at the stacks and what I'm regularly reading now.

While it's not a conscious decision, gravity seems to be pulling me away from single-issue format super-comics and toward trade paperbacks (which, I should note, I don't actually always buy—a lot of times the decision of "Eh, I'll wait for the trade" means I'll wait for the trade to be available, me to have the money to spend on the trade, and nothing more excitng or pressing to spend my money on, comics or otherwise, taking priority).

Anyway, not counting a couple of miniseries I'm following (Flash: Rebirth, Blackest Night: Wonder Woman and ...Flash, wherever Jeff Parker's Agents of Atlas are appearing) and the irregularly scheduled books (Rasl, Comic Book Comics, etc.), these are the only books on my automatically buy each month list at the moment:

Batman: The Brave and the Bold

That's less comics than I've read since the early to mid-'90s, when I first started reading comics, and my reading was limited to what I could afford on teenage part-time jobs (Teenage Mutant Ninja Turtles, some Batman, The Sandman and Advanced Dungeons & Dragons).

I don't know what to make of that exactly...either DC and Marvel are doing a terrible job of making super-comics I want to read, they've finally gotten too expensive for me to justify reading some of them (Marvel), or my tastes have changed so much in the last few years that I've lost interest in the goings on of the Big Two fictional universes.
Posted by Caleb at 8:14 PM

Hey Caleb, I think that First Wave cover is by J.G. Jones - not J.H. Williams III. Jones is still a hell of an artist though!

I miss DC doing themed Annuals. I've still got a few of the Pulp and Elseworlds ones...

I actually find myself buying more comics now that I avoid DC/Marvel's event-driven main-line books. Although my "I'll try to get that when its collected" list keeps getting really, really long...

I'm down to Power Girl and Jonah Hex and I'll prolly be dropping those, too.

Between stories I'm just not interested in enough to re-read and frequent trades, there's just no need to pay for singles anymore.

Speaking of which, SEIGE! I thought the same thing about Volstagg. What was the point of that? Killing a beloved character at the beginning of a crossover is like now the ONLY way to start one. I think Grant Morrison may have done it in a metatextual clever way in Final Crisis which I loved but this, blackest night, infinite crisis, etc. it's too much. Is that really the only thing that gets comic book fans invested in the event?

Also, I think the seven years in the making is just acknowledgment in the fact that Marvel has consistently ran these over-promoted Bendis style comics that are all hype and no substance for seven years. Has it been that long? That's sweet that after all this time they still care enough to act like its not JUST them going through the motions and getting its regularly scheduled inflated sales. Good on them.

Well, the "Firstwave" thing is also similar to Marvel's recent noir-themed do-overs. Just like Marvel's "Fairy tales" echo DC's Elseworlds, which in turn was somewhat similar to "What if". What a way to publish comics :)

Bendis' Secret Invasion was pretty much universally lampooned by any person with critical sense right? And yet I expect Siege, which will still be written by the same damn writer with the same styles and flaws, to be Marvel's biggest seller and outsell Secret Invasion, simply because fanboys need to know what happens next. It's sad really...

The big problem is that everyone is writing for the trades, but still doing these huge crossover events. This makes continuity difficult as well as drawing non-crossovers way too long to fit the format. It's just a big mess.

Seven years worth of stories (please imagine me making exaggerated quote marks in the air there) seems like overkill when it comes to ret-conning someone accidentally drawing a Skrull into that Avengers Disassembled issue.

Why doesn't Marvel just go ahead and say that Siege is an event 71 years in the making? It would be about as accurate and a little more honest.

Caleb, if those are the only monthlies you've got coming through your life, you're missing out on some great storytelling. Check out BOOSTER GOLD. You'll be glad you did; the only really slow period in the book has been over for nearly a year now.

Yeah the last cross-over event I got into - or rather tried to get into - was Secret Wars II and even then I didn't bother reading it to the end or collecting all the tie-ins...

If they must do cross-over events maybe the best way to it would be, as you suggest, via the annuals, many of which I also ignored, but some were good, like the X-Men/Asgard thing, but that may have been because there was one writer, Claremont, and top-notch art all the way through, Paul Smith and Arthur Adams.