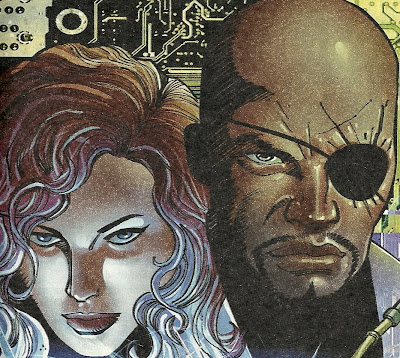 Are you familiar with USA Weekend, the Gannett Company-produced entertainment magazine insert that is distributed nationally as a pull-out section of Sunday Gannett papers?

Well, this past weekend's edition had a cover story about Robert Downey Jr. and Scarlett Johansson. The story is only a couple hundred words long, and it's mostly about the photo shoot the two stars did from the cover, consisting of observations about how good-looking Johansson is and what she's wearing and quotes from the two stars about how much they like each other and the movie.

You can read the story online here if you're curious, and there's a Downey/Johansson gallery from the shoot here, but for our purposes the most exciting piece of the Iron Man 2 coverage package is this, a 17-inch centerfold pull-out poster spanning two pages of the insert.

It's an interesting piece, in which Romita draws the all of the principal characters from the movie, in an old-fashioned Hollywood blockbuster movie poster lay-out (save it's horizontal instead of vertical). I thought it was especially interesting because Janson's an artist with an extremely distinctive style (as is Klaus Janson, who inked the piece), and not one known for doing celebrity likenesses.

The characters are clearly the movie versions rather than the Marvel Comics versions—Nick Fury's black rather than white, Black Widow has kinky rather than straight hair—but Romita drew Tony Stark, Natasha Romanoff and Nick Fury instead of Robert Downey Jr., Scarlett Johansson and Samuel L. Jackson.

I can't fit it on a scanner, so I can't show you the whole piece in detail here (and it doesn't seem USA Weekend wants me to anyway, so go click around their site), but there's a couple of the heads above, and here's a detail of villain Whiplash, who is drawn in a long enough view that his facial features reced and become unimportant—it's the costume and the tech that JRJR's drawing: 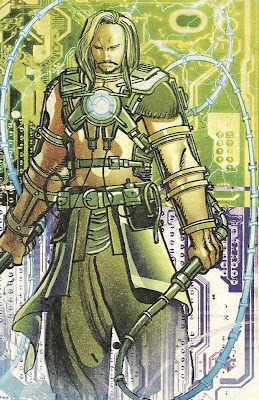 According to USA Weekend's site, they have a circulation of 22.6 million, with 48 million individual readers each weekend. Which means Romita's artwork got one hell of a big audience this past week, particularly when you consider even a best-selling comic book of his like World War Hulk would have only got about 100,000 sets of eyeballs per issue.

Between this and the film Kick-Ass (which, successful or not, still got a lot more looks than the comic did, and I assume Romita got a created by credit during the title sequence...?), Romita must be having one hell of a month.

Oh, and he's drawing Marvel's Free Comic Book Day offering, which should be fairly widely distributed to people who don't already read Marvel comics every Wednesday, and then drawing a new Avengers series written by Brian Michael Bendis, huh? Romita's going to be having one hell of a month next month too.

It's nice to see a talented, hard-working artist get so much attention...particularly when that artist is still around to enjoy it and personally benefit from it.
Posted by Caleb at 9:04 PM

It's nice that an artist can get so much recognition, but I don't think Romita should be that artist.

His characters in general, and the ones here in specific, always look bland and boring. He doesn't do facial features or expressions well. He can do raw power and action scenes okay, but those are often murky and heavily inked. Only time I really enjoyed his worked was on Thor. Putting him on Avengers seems like a misfire, especially with Bendis at the helm.

Don't know if you've seen Kick-Ass, but it features a segment, Big Daddy's origin, which is told in through the pictures (and some 3D type effects) of JRJR. Its impressive, and now is a good time for JRJR.

I have to disagree with Hdefined though, JRJR is one of my fave artists, and although he isn't in the league of Kevin Maguire (for example) with expressions and facial features, he's leaps and bounds ahead of most of the seemingly popular artists working today.