My Blackest Night was about...this big. 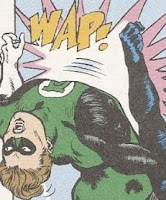 DC's Blackest Night miniseries, and thus the sprawling storyline that ran through a large swathe of the company's superhero line for much of the year, recently ended. As a regular reader of Geoff Johns' Green Lantern comic, I ended up reading Blackest Night, which was both a big DCU event story as well as a Green Lantern spin-off...and ended up reading an awful lot of the tie-ins.

Now that it's over, I thought I'd take the opportunity to do a little remembering and a little more math just to see how many comics constituting chapters of the story I ended up reading, and how much money I ended up spending on the event.

It's a fairly long list, but those of you who followed it will note that it's not actually all that much of the event. I read Blackest Night and Green Lantern, but skipped Green Lantern Corps, the secondary GL title, and the other ongoing monthly which ran tie-ins for the duration of the miniseries, and I only read a few of the ring-promoted tie-ins, the special Blackest Night "colon" miniseries and the back from the "dead" extra issues of canceled series.

So I suppose this could be considered a conservative list of parts of Blackest Night from a reader following the story.

I'm not necessarily complaining, just remarking upon it.

Those 35 books were released over the course of nine months, and that's about 36 Wednesdays, so it's really only about a single comic book at a cost of $3 a week. So I don't really regret any of those purchases (although I suppose I would have returned Doom Patrol and Weird Western Tales if you could return comics you didn't like for cash the way you could a garish sweater Christmas gift). 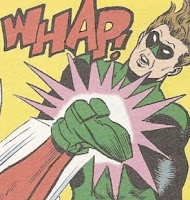 No, and much of it wasn't really used to any great effect (That is, Blackest Night certainly didn't have the breadth or depth I would have hoped form a, I don't know, 2,000 page superhero story, of course that's because it wasn't really a single story, but one big story with lots of little stories reflecting it). Having recently reread just the eight issues that constituted the main series, I don't think it's true that all a reader needed in order to get a complete story was to have read Blackest Night #1-8. There are a few instances in the story in which events seem to occur out of left field if one wasn't also reading Green Lantern (Hal Jordan returning with the so-called New Guardians, for example), and the story seems a bit more shallow and safe without some of those Green Lantern issues (The secrets of the white light entity revealed in GL #52 aren't necessary to follow the plot of Blackest Night #8, but it sure made the idea of the White Lanterns more interesting).

At the same time, one probably didn't need to read all of those Green Lantern issues. GL #49, for example, the digression about John Stewart on Xanshi with all the ugly, messy art was essentially just killing time.

Having not read every single tie-in myself, I'm in no position to determine what exactly was necessary, but I'm assuming the bare minimum would have been the eight issues of BN proper and maybe half the GL issues, or some 13 issues and $47. Many of the tie-ins were presented as rather transparently optional; you only needed to read those issues of Booster Gold or Doom Patrol if you were curious as to what those characters were up to during the event, and how they'd react to their loved ones returning as zombies bent on hurting their feelings (and then eating their hearts).

I think there's something kind of exciting or, at the least, fascinating about that form of interactivity, which allows a reader to essentially determine the size and scope of the event/story for themself.

And that's kind of interesting.

Now here's a picture of Hal Jordan being beaten on the head with sticks: 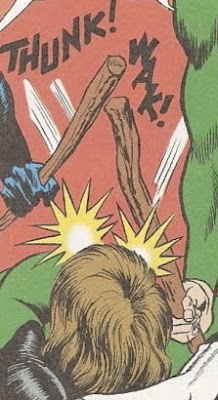 This post is a good summary of what I've come to find fascinating about comic book fandom--that no two fans actually have the same canon. If you like, say, "Firefly" you can be pretty sure most other fans will have the same canon they're drawing from as you. But with comic books--even with one fairly discrete "event" like Blackest Night, you're right, the experience is different for each reader, they've seen different things. Once you get into the full canon it's almost impossible to even be following exactly the same titles as another person, there are just too many to choose from. So we all get lots of fragments patched together in individual ways. How very postmodern.

Also, Hal getting whacked with sticks is just bonus. :)

As people who listen to my podcast summarizing Silver Age Hal know, I feel that everything is improved by Shots of Hal getting whacked in the head....

It IS true that pictures of Hal getting thwacked are always a high-light.

I enjoyed the heck out of Blackest Night, and Green Lantern. I read some of the other books, but Green Lantern Corps was fabulous as well, and I'd recommend it, if you like Guy and Kyle and Soranik and Kilowog and Salaak and...well, you know. Oh, and Mogo is awesome.

Sally...I actually prefer Green Lantenr Corps to the main book...but that might have something to do with the way Johns' Mary-Sue-like version of Hal Jordan as The Greatest Guy Evvvvaaah really, really grates on me...

I wouldn't say that this is unique among comic books.

For instance, look at The Matrix :

Yes, you have the trilogy of movies, but you also have the Animatrix short films, the video game and so forth. All of these can arguably be considered 'canon'.

Firefly is another example. As well as the 13-episodes of the show, you also have the 2 comic book mini-series and the follow-up movie.

Even among classic literature, you can argue whether the 'authorised' sequel to Gone With the Wind is part of the story.

you should really have been reading glc, or go back to it, especially near the beginning of blackest night, it was by far the best part.