I have a short Q-and-A style interview with comics historian and editor Craig Yoe about Dan DeCarlo, Jetta and Dan DeCarlo's Jetta (IDW Publishing), his new book collecting all three issues of the series and a bunch of pin-ups by 37 artists.

In addition to being a nice little bit of recovered comics history, an entertaining read, a collection of great comics art and a source of hours of Googling enjoyment scanning the home pages of the contributing pin-up artists, it's also a very educational book.

For example, here are three things I learned from it: 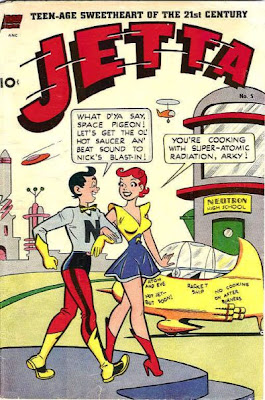 1.) Once upon a time, a "#1" on the cover of a comic book was seen as a deterrent rather than an enticement to buying a comic book. Jetta was only published for three issues, but those issues were numbered #5, #6 and #7. Why was that?

According to Yoe, "Many of [Jetta publisher] Standard's comics, like Jetta, began not with a number one issue, but with the number five. This was a ploy to fool newsstand dealers into thinking that it was a solid title with a track record."

Given that comics today are often relaunched, and publisher's occasionally go to great length to get a "#1" on the cover, I thought that was a pretty telling detail about how much the selling of comics has changed in the last fifty-some years or so. 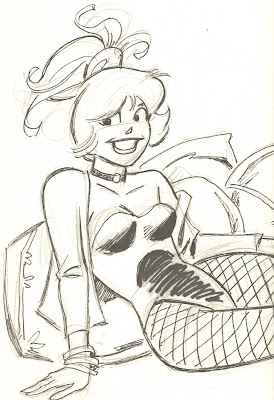 2.) Betty Cooper cosplays as Black Canary. As you can see from the above image, a piece of original art DeCarlo drew for Will King. That's actually only half of the image, which is spread across two pages of Dan DeCarlo's Jetta, but I could only fit half of it on my scanner. DeCarlo drew Betty in Black Canary's original costume, so the other half has her high-heeled black boots with the pirate-y cuff, with DeCarlo's signature beneath it. 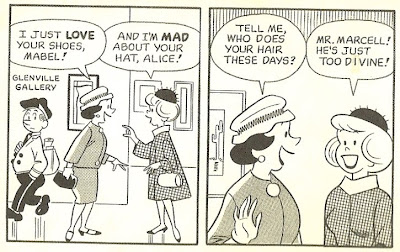 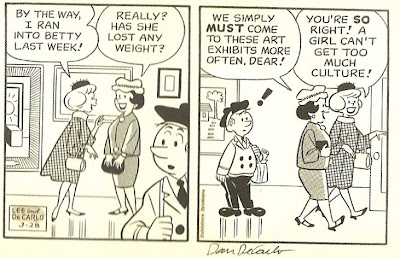 3.) Before Willie Lumpkin had The Baxter Building on his route, he starred in his own comic strip. Yoe includes a page of four comic strips in his introduction to the book. The first three are try-out strips form a newspaper syndicate, and the fourth one is the one above (which I've cut from it's four-panel horizontal strip format to make it fit better on a vertical blog like this). It's called Willie Lumpkin, and was published through Publishers Syndicate around 1960 or so. Look how young Willie was! (You can see a few more examples of the strip here).
Posted by Caleb at 5:41 PM

That sketch of Betty as Black Canary just might be the single most awesome thing I've seen in my life.

So scan the other half already!

If I can ever get the scratch together, I will!

Should I feel wrong for finding that drawing of Betty cosplaying as Black Canary a whole heaping helping of sexy?

But then...I did date a girl once because of her uncanny resemblance to Dinah..