Batman and Robin #11 (DC Comics) The last page reveal of the classic DC villain that Talia has brought in to “steer” her son Damian in deadly combat against Batman Dick Grayson via remote control was a real shock. Not because the character hasn’t been seen in so long, but because he’s become so ubiquitous and over-used in almost every DCU book (Hell, he even regularly appears in Tiny Titans!) that I was honestly flabbergasted to see Grant Morrison use him at all.

Given how few and far between the Bat-villains that Morrison didn’t personally make up have appeared during this run, it’s honestly awfully weird to see that guy here.

This is the middle issue of the current three-issue arc, and as such, it’s fairly uneventful. Dick Grayson continues to explore the mysterious caves beneath the Batcave while puzzling out the secret history of The Waynes and bat-men, while Damian and Sexton beat up some dudes in the grave yard.

The Andy Clarke/Scott Hanna art team remains quite competent, if never quite jaw-dropping. They’re head and shoulders above Philip Tan and Tony Daniel, but not quite up there with Frank Quitely or Cameron Stewart. 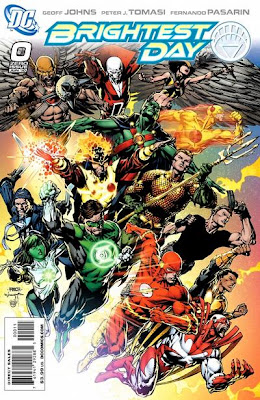 Brightest Day #0 (DC) Well this is a very unusual strategy to pursue for a zero issue that kicks off both a 26-issue biweekly series and story arcs in seven different ongoing titles: Trying to talk readers out of reading any of those comics.

Here’s the very first page, which includes a recreation of one of the saddest things most children experience, a sad thing that often constitutes a child’s first experience with death: 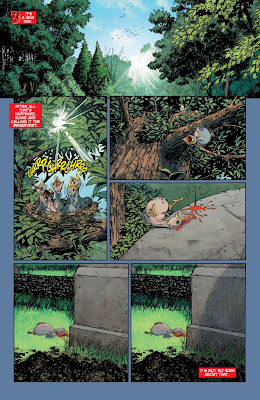 That there is a lot of baby bird blood.

Sure, the newly resurrected Boston Brand uses the white lantern ring he’s still wearing to bring the bird back to life, so there’s not reason to, like, mourn the fictional baby bird or anything, but jeez, who wants to to read page two of a comic book like that?

The next 46-pages aren’t a whole lot better.

From there, the pair check in with each of the 12 resurectees from Blackest Night #8, essentially just setting up plot lines that will be followed in Brightest Day and the other six books given full-page house ads at the end of this issue (This is a pretty great value though; 47, ad-free story pages, followed by hosue ads after the story ends).

Some of these look more intriguing and entertaining to me than others, and I suppose a lot of that will depend on one’s affection for the characters. The fact that Martian Manhunter J’onn J’onnz is planning to bring life back to Mars, for example, sounds interesting to me, perhaps partially because I like the character so much and partially because I haven’t read that story before, but the ‘90s Hawk and Dove having the same conversation they always have for three pages? Hawkman and Hawkwoman talking about how much they love each other? Osiris, who is essentially Black Adam Jr., promising to do the same thing Black Adam’s done in a couple of storylines already?

I’m having a hard time working up any enthusiasm, and I found myself much more curious about how Captain Boomerang got put in prison for crimes he committed in a past life (Surely a good lawyer could have got him off?) or what kind of paperwork the Justice League anted Ronnie Raymond to fill out to prove he was still alive.

It doesn’t help that the book is entirely set-up, which in most cases involves a lot of sitting around (Or standing or flying around) talking, and however great Johns’ plotting abilities may be, he writes simply awful dialogue.

The art by pencil artist Fernando Pasarin and other inkers is serviceable but unremarkable, and it sure shames that of ballyhooed cover artist David Finch. Why was DC so excited about singing an exculsive contract with the cover artist? He can’t even give Maxwell Lord two arms or roughly similar sizes.

Despite the fact that I don’t think this was a very good comic, it’s a better one than the comprable event/branding kick-offs of Countdown to Infinite Crisis #1 or Brave New World #1, and it’s made pretty clear that at least half fo the plot lines introduced here will continue in books other than the Brightest Day series, with the ads and a stiched together splash page showing different characters by different artists indicating what characters will appear where.

This may not be a very good comic, but it’s not so horrible one that it’s convinced me not to read Brightest Day #1. I could swear Johns and Tomasi were trying to do just that, though.

We get a flashback to Joe the Cat Master’s training we see his cat Earthling as a kitten (Kawaii!) and we watch the pair on their latest weird job, which includes several strange uses for a weaponized cat and lot of fun word image puns.

I agree about Batman and Robin that the 'surprise' character appeared out of left field, but I was happy for it. I've thought for a long time that if Dick Grayson were truly going to have an arch enemy it should be that characters. He's dangerous, he's universally respected, and Dick probably has probably faced him more than any other hero has.

God, yeah, that opening sequence in Brightest Day...what's even worse is that they knew EXACTLY WHAT THEY WERE DOING...even making a joke about it.

Birds in refrigerators, I tells ya.

If J'Onn is successful in bringing the Martians back is it going to lead to a repeat of the entire New Krypton story?