My current base of operations is a small town in northeast Ohio, right on the coast of Lake Erie. How small a small town is it? The population is currently about 21,000, and the whole city is just under eight square miles—as long as you’re not carrying anything heavy, you can get anywhere in it on bicycle.

There are two libraries within the city limits, and their collections leave a lot to be desired, especially if you’ve just moved here after spending years in Columbus, Ohio, where the 22-branch Columbus Metropolitan Library system carries just about every single graphic novel or comics collection you can think of—the only ones I haven’t been able to find that I’ve looked for there have been the two recent-ish Uncle Sam and The Freedom Fighters series from DC.

Given the size of the community they serve, it’s perhaps no surprise that this libraries aren’t overflowing with comics collections, and they’re suffering from the same financial stresses as every other library in Ohio…and our neighbor to the East, Pennsylvania and, for all I know, every library in the US.

Especially if you’re a small library serving a small town.

Of the two libraries, I believe I mentioned that one of them doesn’t even have a graphic novel section, just some Neil Gaiman, Alan Moore and manga comics intershelved with the fiction in the youth section (the other library does have a small collection, which is where I’ve been getting all those crappy Teen Titans books).

The graphic novel section-less library did carry comic books however, in the form of off-the-rack, single-issue, comic book-comics, which I was a little surprised to see. In the youth magazine section, there were three stacks of comics, with one issue from each stack given a little display slot in which the cover faced out to let patrons know what books were in those stacks.

The three stacks each consisted of a single title, all DC books: Batman, Superman and Scooby-Doo. I didn’t check the dates, but the Superman and Batman piles seemed to start shortly after the 2006 “One Year Later” jump. Batman began with the Morrison run and went all the way up to the latest issue of the series, the Tony Daniel-written, Guillem March-drawn Batman #698. Superman began with some Kurt Busiek-written issue, and seemed to continue well into the current James Robinson-written, triangle-numbered crossover era.

I assume the library had subscriptions to each of these titles, it struck me as a little odd given the relative cheapness of trades paperback collections (particularly with the discounts libraries can get) and the fact that trades will last indefinitely, whereas comics tend to fall apart awfully quickly. It’s especially odd given that Superman has been crossing over into two to four other titles a month, so if you only read Superman, you’d be reading every fourth chapter of a story, without access to the chapters in between.

While I’ve read some of these comics (the Morrison-written issues of Batman, the Busiek-written Superman and some of Robinson’s earlier issues of the same title), there were an awful lot I haven’t.

So I scooped up stacks of each, and decided I’d blog my way through them. I’m going to start with Batman #687, and then divide the Batman stack into a couple of posts, as the creative teams change a bit during those dozen or so issues.

If you’ve been reading this blog very long, than chances are you’re well aware of my feelings about Judd Winick’s DC superhero writing and Ed Benes’ artwork. To put it mildly, neither of them are particular favorites of mine, and, if you asked me to assemble a creative team that would guarantee that I wouldn’t buy a particular comic book, Judd Winick and Ed Benes would probably be it.

Needless to say, I didn’t buy this issue of the new comics shelf the week it came out.

It’s cover is branded with a “Batman: Reborn” banner above the title, indicating that this is one of the post-“Batman R.I.P.”, post-mourning issues of a Batman comic, in which Dick Grayson becomes Batman and the whole Batus quo gets a bit of a shaking up (Damian is the new Robin, they leave the Batcave for an underground bunker in downtown Gotham, they have a new Batmobile, Tim Drake leaves town to dress up like a character from Kingdom Come, etc).

The title page refers to the story, “A Battle Within,” as “an epilogue to Battle for the Cowl,” although it’s not really. In fact, this story is about Dick Grayson’s decision to become the new Batman, despite his reservations about doing so, which was also the subject of Battle for the Cowl. In other words, this tells the same story as that more-or-less unnecessary story, only completely differently. It’s not exactly contradictory, but it is redundant—one need not read both Battle and this issue, and, in fact, were probably better off skipping Battle, as this story is shorter and better.

And this is something rather interesting about the current state of the Batman franchise—the various Batman-starring titles all seem to be telling the same story, so a devoted Batman fan need not read them all, but simply choose the one they like best. Grant Morrison’s Batman and Robin—the flagship book which, after Morrison left Batman, has been driving the overall Batman story, with the other titles following Morrison’s lead—explained the changing-of-the-Batmen its way. Battle for the Cowl offered another explanation. It seems Batman did as well. DC seems to be offering readers their choice of flavors, as if the publisher would like you to pick a Batman book or two to follow and ignore the rest, rather than trying to push them all on you (banner branding aside).

There’s nothing wrong with that, of course. I picked my preferred flavor of Batman—Morrison and a series of guest artists’ Batman and Robin—and got a complete Batman story without needing to follow anything going on in Batman, TEC, Batman: Streets of Gotham, Red Robin, Batgirl, etc. It’s nice that the publisher has laid out a choose-your-own-Batman-adventure line of comics, but it’s a little weird too, isn’t it? Why not try to sell all Batman comics to all Batman fans? Is DC, or at least the Batman office, not chasing every dollar possible, not squeezing as much money out of their core readers as possible? That’s…unusual.

It’s by far the best work I’ve seen from Benes since his run on Birds of Prey, perhaps in large part because the cast of the book—Dick Grayson at two different ages, Alfred, Damian, some guests in certain scenes—is a lot smaller and more varied in age than the cast he was so struggling with in Justice League of America, where everyone looked the same and Benes rarely seemed to furnish panels with backgrounds.

It probably also helps that there are next to no women in the issue—Wonder Woman gets three panels, and that’s about it—so his habit of over-sexualizing all female characters regardless of the context didn’t distract from the story the way that his JLoA work did.

Or, as I’m fishing for explanations, there’s also the possibility that Rob Hunter’s inks look better on Benes’ pencils than some of the others who have inked him before.

Or hell, I don’t know, maybe Benes had just gotten a lot better than he was. 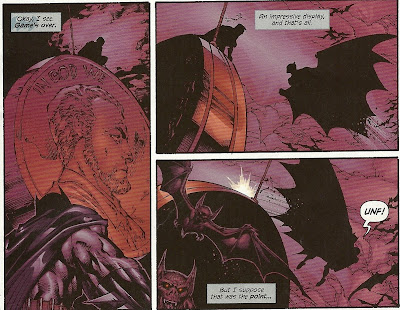 Took me a couple of readings to realize the point of view flipped between the second and third panel there; it looks a bit like the figure atop the penny jumped into Batman and knocked him backwards.

Which isn’t to say he’s dynamite here or anything. His character work still has all the drama of posed action figures. Take, for example, this scene, in which Superman and Wonder Woman deliver Batman’s recovered cape and cowl to the cave and ask Alfred if he’s doing all right: 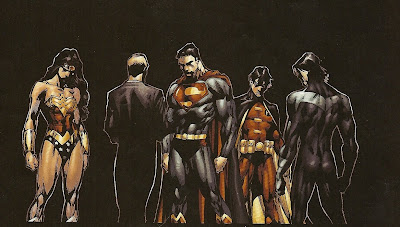 Ha, I love that panel of everyone striking an identical eyes-downcast-but-still-flexing pose during their “awkward” silence.

This is also one of the best DC scripts I’ve seen from Judd Winick. In fact, I can’t really find anything wrong with it. I’m not fond of the assigning more than one narrator to a single story, but there are no mistakes in it; nothing grates or sounds too off, no one talks about anything wildly inappropriate.

The book opens with a scene from back in the day, with a young, still-Robin Dick Grayson launching a sneak attack on Batman in the cave as part of his bat-homework, before jumping to Alfred staring at an empty cape and cowl in a display case, being sad about the fact that Bruce Wayne “died” during Final Crisis and now there’s no Batman.

Grayson is still in the cave and still fighting crime, but doing so from the shadows or safely from within the cockpit of the Batmobile, while dressed as Nightwing…he doesn’t want to put on the suit and make it official.

The book ends with The Scarecrow holding a city bridge hostage with strategically placed fear gas chemical bombs, and then Dick Grayson sneaks up on him to confront him, not appearing in the Batman suit until the very last panel, a last-page splash page.

Along the way, Winick explains some of the things that probably aren’t all that important—that is, Morrison glossed over them in order to leave them to the readers’ imagination—but if you wanted to know why Batman didn’t have a big Superman-style funeral, or why Dick and company relocated to downtown, or why he finally relented and decided to become Batman (aside from the rationale given in Battle), well, here you go.

One nice thing Winick did, and will do more of later, was to go out of his way to stress how Dick Grayson’s Batman and Bruce Wayne’s Batman are pretty different Batmen, something Alfred stresses when the two of them share repartee.

If I were Winick or Benes, and a friend asked me if they could read some of the stuff I’d done for DC, this would probably be the first book I’d hand that friend.

A library that peddles in the floppies, pure insanity. That would be pretty cool to just be able to grab a few issues, not as cool as getting some trades but better than nothing.

Hope you find some real gems in the mix.

I was surprised by how little I disliked Winick's Batman run. Probably the best stuff I've read from him, at least since his hit-or-miss Green Lantern run. Which must have been what, 9 or 10 years ago at this point?

Also - The Columbia (MO) Public Library has a very nice selection of trades and graphic novels, but they also get several series in singles. Off the top of my head, I can think of Batman, Superman, Wonder Woman, Flash (Rebirth, most recently), Fantastic Four, Hulk (the Loeb book), Captain America, and JLA.

This is also one of the best DC scripts I’ve seen from Judd Winick. In fact, I can’t really find anything wrong with it.

Generally speaking, I liked it. But what's wrong with it, at least when it comes to that scene, is that there's no inclusion of Barbara Gordon or Cassandra Cain.

There's been a weird trend in the last few years to keep the bat-guys and bat-gals kinda separate. Catman has had more page-time reacting to the death of Batman than Oracle. Catman. (I love Catman in Secret Six, but that's just wrong.)