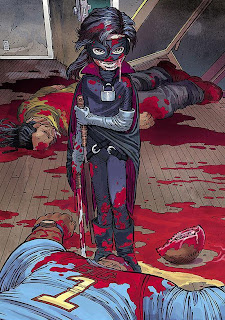 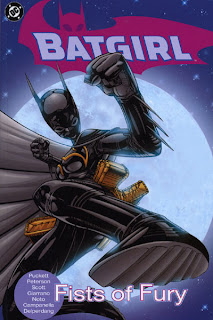 Forgive me if this is a ridiculous question, but I only made it about two issues into Mark Millar and John Romita Jr.'s gay-panicky, casually racist, delay-plagued eight-issue miniseries Kick-Ass, so I never made it to the part where pre-teen death-dealer Hit-Girl's secret origin is revealed.

I have read a lot of reviews of the new movie though, which sounds like it scrubbed the more questionable content of the comics while still managing to make the same existential error (premising a story on a realistic take on a popular fantasy genre, and then devolving into an extremely fantastic story with next to no grounding in anything approaching the real world).

Most of those are most focused on the character Hit-Girl, in particular her swearing and her ability to inflict Uma Thurman-in-Kill Bill casualties. Many of these reviews mention who she is and how she came to be, and, well, it sounds almost exactly like the origin of the 2000-2008, Cassandra Cain version of DC Comics' Batgirl.

According to the nation's film critics, Hit-Girl was trained in martial arts by her father since birth, subjected to crazy amounts of child abuse like being shot in order to learn to take a bullet, all for the purpose of turning her into a perfect killer.

Cassandra Cain was trained in the martial arts by her father since birth, subjected to crazy amounts of child abuse like having the shit beat out of her, getting stabbed and shot in order to learn how to take all sorts of damage, all for the purpose of turning her into a perfect killer.

The main difference between the two origins is that the one from the Batman comics seems a lot more realistic since a) Cassandra Cain paid a huge developmental price for all of that abuse, never learning to speak or understand English until long after she escaped from her father, and b) her father was one of the world's greatest professional assassins and spent years perfecting a training-kids-to-be-assassins program, where as Hit-Girl's father is apparently just an ex-cop.

Am I being unfair and oversimplifying their similarities, and they're actually much more dissimilar than they seem? I suppose I'll borrow a Kick-Ass trade from the library eventually, and then I'll see for myself...
Posted by Caleb at 2:05 PM

The movie is considerably better than the comic. The only really good thing about the comic is the JRJR artwork.

Oh Cassandra Cain-- you'll always be Batgirl to me.

I made it half as far as you in reading the comic, so I can only speak for the movie. In effect, she's Cassandra Cain, but in personality, she's Rose (Ravager) Wilson.

"MM: Yeah, I think so. I mean, I suppose there’s lots of autobiographical stuff like with Big Daddy and Hit-Girl. Because I just turned 40, and I’ve got an 11-year-old daughter. That relationship—minus the weapons, I suppose—is quite like my daughter and I. We have great fun, and we go down to the park and play tomboy games and everything. What I did with Big Daddy and Hit-Girl was add a semi-automatic weapon in there."

SPOILERS for the comic...

Early on we're told Big Daddy was an ex-cop who trained his daughtre Hit Girl to avenge her mother's death.

Later we learn that he was never a cop, just a comic fan and he trained his daughter because he wanted her to be a superhero not a just an ordinary girl.

It's not a bad twist and fits the overall theme of the book. Of course it utterly destroys the 'realism' since Millar has no idea how kevlar works (apparently he think it's like Superman's invunerable costume) nor any idea how little upper body strenght an 11 year girl (even a trained one) should have.

The difference with this story is that while the dad did kind of torture her, he says something along the lines of, "I want to make sure this is fun for you", so it's more of a father/daughter bit of bonding than a villainous plot to create an emotionless killing machine. Dumb? Yes, but also somewhat amusing. Only somewhat though, so don't go thinking Millar's sense of humor is going to save the story or anything.