Aladdin: Legacy of the Lost #2 (Radical Publishing) This second of the three over-sized issues comprising Radical’s first Aladdin miniseries departs more, um, radically from the familiar story of the familiar character. This section features Aladdin trying to woo the princess and losing both her and the lamp to the wicked vizier, but there are some unusual tangents taken.

One is the now more prominent role given to Sinbad the Sailor, who guides our hero down into a secret city of humanoid monsters below Shamballah, and then provides Al with a ride to the evil sorcerer’s flying hideout.

The other is the person Al and Sinny (Just trying out an old-school Marvel-style nickname for Sinbad, don’t mind me) consult in the secret city, a devil-like figure called the mantis queen, who resembles a sort of insect centaur lady thing.

The art in this issue is particularly…curious, as Patrick Reilly draws the first half and Stjepan Sejic draws the second half. The two each boast individual enough styles that their work doesn’t really go well together (it’s pretty obvious when the artists switch), and given the fact that this is a limited series, it’s curious that Radical split the art duties up at all, rather than simply waiting for a single artist to finish the story (or devising a studio system of some sort to make the whole thing look more consistent).

At any rate, both artists obviously have decent chops, but aside from some neat monster designs here and there, I was rather unimpressed with both. Too many scenes lacked any real sense of wonder, while the subject matter of Ian Edginton’s script seems to demand jaw-dropping visual after jaw-dropping visual. Some of it looks quite nice, but none of it was particularly magical, stop-and-stare work of the sort you’d expect for an Aladdin and his magic lamp story.

For example, see that Arthur Suydam cover above? The interiors don’t look anything like that. I’m not always sold on Suydam’s work, but that image certainly has a nice storybook quality about it, looking like a modern, computer-heavy comic book version of the sort of book plate illustration that one might have seen in an copy of a Thousand and One Nights collection from early last century or so.

Kevin Smith’s Green Hornet #2 (Dynamite Entertainment) After having established the fact that the original Green Hornet and Kato have retired after completely defeating all crime in their city, and that the original Hornet has a young, rich, handsome, in-shape son with no direction in his life in the previous issue, this next chunk of Smith’s screenplay-turned-comic book miniseries takes the next expected steps.

For example, if you weren’t quite sure if Britt Reid Jr. start wearing Green by the end of this series, this issue lets us know that he was also a valedictorian with a 4.0 average and six kick-boxing trophies. And he doesn’t respect his father because he doesn’t think the old guy’s ever done anything worthwhile in his life (the Britt the Younger doesn’t know that Britt the Elder was the Hornet).

Despite the transparency of certain elements of Smith’s plotting, the scripting is fairly decent, and this issue gives the two Britts a lot more panel-time together, as well as introducing the children of Kato and the Yakuza boss we saw the original GH and Kato take down in the previous issue.

Johnathan Lau’s artwork remains serviceable, but there are a few instances in which the storytelling is quite confused, during the set-up to the issue’s big action set piece.

Beyond what charms Smith, Lau and Phil Hester’s book might have, however, a great deal of the fun of this project remains contemplating the hypothetical movie the story could have lead to, if the studios ended up using Smith’s pitch. What I found interesting on that front this time around was the fact that both Britt Reid’s have pretty meaty roles so far, the pair of them taking part in a big ninja brawl while in their civilian identities at the end of this issue. With two generations of crimefighters in the story, if this were a movie it may have provided a fairly unique opportunity to spotlight an older, middle-aged actor as an action hero/superhero star while simultaneously having a younger, hotter lead. (And the fact that the new Kato is a woman means they could have cast a middle-aged Asian action hero like Jet Li, whose name I believe was being tossed around early on, and a beautiful young actress in the role).

I’d advise trade-waiting unless you’re very well off (I don’t think it’s worth $4 as opposed to $3), but in terms of overall quality, I think it remains fun on both its intended level and the whole, more-abstract, let’s-think-about-the-differences-between-comics-and-film-while –reading level.

Alex Ross’ cover sure is boring this time around though (also, why is the background flying by as if the car was in motion, if GH and Kato are just cold standing there next to it?)

(Just kidding. The only other one I can find is this one by John Cassady: 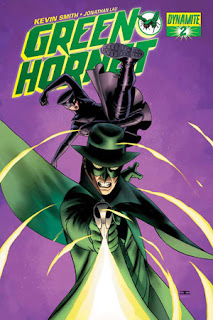