Athena: Grey-Eyed Goddess vs. Clash of the Titans 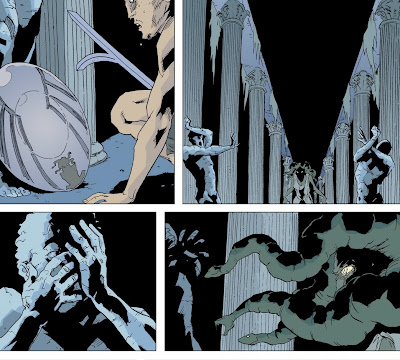 First Second’s Athena: Grey-Eyed Goddess, could hardly have been scheduled better for release. It’s the second of the publisher’s planned 12-volume Olympians line, following winter’s Zeus: King of the Gods.

The publisher has it slated for Spring 2010, while Amazon.com and Barnesandnoble.com both have April 13 (I don’t see it on Previews.com yet, but I may have missed it).

This is pretty fortuitous, given that last week the remake of special effects master Ray Harryhausen’s 1981 swan song Clash of the Titans came out and, despite not being any good at all, it was the number one movie in America.

The Medusa head is featured pretty prominently on the cover of Athena, and the Perseus story is the climactic one in the volume, which is arranged as a series of shorter stories about the goddess, each told by one of The Fates as they go about their work.

As The Fates would have it, I received a review copy of Athena last week, and gave it a read Thursday night, the day before I went to see the new, 300-ized version of Clash of The Titans. I had pretty low expectations for the film (in part because of how enamored I’ve been of the original since I first saw it in the mid-‘80s and in part because the trailer didn’t look too terribly promising) and yet I still managed to be disappointed by the new version.

I don’t really want to get into a movie review or anything here, so I’m not going to tick off the things I didn’t like about the movie here, but perhaps the most perplexing aspect for me was why they bothered to make it.

It’s not quite a remake of the original, despite drawing inspiration from some of the same myths, the reappearance of Harryhausen’s unique design for Medusa, and the addition of some of the same extra-mythical elements that the original had thrown in (giant scorpions, a humanoid sea monster referred to as “The Kraken).

In fact, it’s substantially different in some pretty key ways, including recasting Hades as the villain and diminishing the roles of all the gods save Hades and Zeus and spending most of its time on a weird god vs. man conflict. The human beings have a very post-modern appreciation of the relationship between gods and humans—the former needs the belief of the latter to exist and thrive—and the two sides seem to be at war. Perseus, a demigod, is looked down upon by his fellow human beings, in much the same way that mutants are treated in the X-Men films. There’s also more of a male-bonding, Lord of the Rings/300 vibe to the quest element of the film, a love interest in Io and a race of “Jinn,” semi-human, magic-using, desert-dwelling tree-people who only say “RRRAAAARRR!”

There are a lot of adjectives one could use to describe the original Clash, but “faithful” isn’t one of them. And that’s what’s sort of weird about the new one. It veers so far from the original (not even retaining the same catalogue of monsters) that I’m unsure why it keeps the name; if there’s value in the name, the film will likely disappoint those who appreciate the value, and it’s not like they had to use the name, if they were simply loosely basing a movie plot around an ancient Greek myth.

The Perseus story is pretty much the definition of “public domain,” you know?

Anyway, not only did the new Clash stray far from the old one, but it didn’t stray any closer to the original myths. Plenty of names and places form Greek mythology surface, but not in any organized fashion that would suggest a terribly faithful retelling of the Perseus story, and with enough strange changes that many of what is included from familiar myths has been changed (Hades creates a Titan from his own body, Cassiopeia and her whole city state are attempting to wage war on the gods, not just idly comparing Andromeda to Aphrodite’s beauty, etc).

But back to Athena: Grey-Eyed Goddess. It does stick faithfully to the original myths, and the section retelling Perseus’ story was therefore a nice refresher before seeing the new version of the movie. It was, additionally, fun to see the way George O’Connor designed the various actors and staged the scenes, as compared to the way that the filmmakers of Clash ‘81 and Clash ‘10 did.

In Athena Perseus, a somewhat slim youth with dark shaggy hair and only the very beginnings of a beard, receives gifts from Athena and Hermes to ready him for the fight with Medusa—here flying sandals, a polished shield, a special head-cutting-off sword and advice on how to see Medusa without looking at her.

The new movie Perseus, buff, scowling, Marine-haircut Sam Worthington, gets a single gift from the god Zeus, a magic sword he refuses to use because he doesn’t want any favors form the gods—he wants to succeed in his quest as a man. That entire thread of the movie seemed especially weird after re-reading the original story as O’Connor presents it. The gods give Perseus so much help that he has to do little more than remember to show up in order to succeed—his story seems like an odd one to graft a story about human self-determination vs. blind faith and servitude in the divine on to.

Wothington’s Perseus also gets a shield, given to him by two members of his entourage, although he figures out how to see M. without looking at her on his own.

O’Connor’s Graeae are much like those in the first flick—frail old women hidden under cloaks, handling an eyeball the size of a small apple. Perseus tricks them by stealing the eye. In the new movie, the three witches are monster women with smooth faces devoid of eye-sockets or noses…they look a bit like H.R. Giger’s aliens. They handle a giant eyeball with a long optic nerve that seems to hook into whoever’s wearing it. They rough up Percy and pals, only letting them go when the hero threatens to drop their eye in the fire. (These witches don’t share a tooth either; each has a mouth full of ‘em).

As for Medusa, O’Connor’s is a big green woman in a dress, a fairly traditional design really, although her face bares glowing green eyes, jagged teeth, perpetual shadows which keep the reader from ever really seeing her face, and his snake hair features extremely fat, almost worm-like snakes that taper off near the heads.

The new movie sticks pretty close to Harryhausen’s design. The movie Medusas are both woman from the waist up and snake from the waist down (their tails ending in rattles). And both are archers, allowing them to hunt their prey in addition to merely looking at them to death. The big difference, other than the fact that the original was stop motion and the new one CGI of course, is the fact that the new one is a beautiful woman where she’s not snaky, and she’s super-agile, climbing around like Spider-Man.

I guess we’d have to ask O’Connor to know for sure, but I’m pretty sure he had the original Clash in mind when drawing the Medusa fight sequence, as there are a lot of similarities between the setting and the staging (The new Clash Medusa, by contrast, lives in a temple situated above a lake of lava on the edge of the underworld, and one has to cross the River Styx in Charon’s nice, roomy ferry boat to get there).

O’Connor puts the Pegasus where it belongs, being born out of the blood of the dead Medusa, while the first Clash had Harry Hamlin and Burgess Meredith laboring to catch him for transportation, and the new one has a big, black, bad-ass Pegasus coming to Perseus near Hades to help him get back in time to save Andromeda.

O’Connor doesn’t use a Kraken of course, but restores Cetus to the story, and his whale god resembles a gigantic, heavily plated whale, with a blowhole like a chimney, looking like a more realistic version of the sorts of plated whale monsters one sees on old maps (You can see a black and white version of it at O'Connor's blog.

Clash ‘10’s Kraken is closer to Clash ‘81’s in that it’s roughly human-shaped, but it’s got all kinds of crazy sea animal parts, including huge crustacean legs and tentacles aplenty. (I liked what they did with the Kraken a lot…it’s perhaps the only design of any kind that improves upon anything in the original).

Perhaps also of note in O’Connor’s version is that his Andromeda is black, which makes sense given she’s an African princess, but the Andromeda’s in both Clashes are white (Of course, they're also said to be from Greek cities in the films, instead of from Ethiopia).


RELATED: Did you know that Athena and Zeus writer/artist George O'Connor once put together an eight-page sample story for Marvel Comics, featuring Namor, The Sub-Mariner beating up a giant whale monster that looks an awful lot like O'Connor's Cetus design? It's true! You can read part one here and part two here.
Posted by Caleb at 4:16 PM