There's only one reasonable explanation. 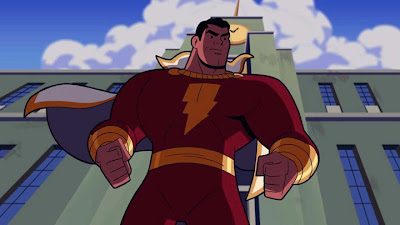 If you've read any of my past posts in which I excitedly blogged my way through certain episodes of the Batman: The Brave and the Bold cartoon, then you know I'm a pretty big fan of the series.

In addition to being a really fun, really funny, really well voice-acted cartoon seemingly aimed at both little kids and the most obsessive adult DC Comics fans, the show consistently marries the particular design skills of many of the great artists to work for DC over the decades (particularly Dick Sprang and Jack Kirby) into a seamless, consistent whole while retaining the individual artists' personal aesthetics. It also seeks out the weirdest and most obscure DC-owned characters available as guest stars, demonstrating how contrary to popular fan opinion even the wackiest characters have modern resonance and potential kid-friendly commercial appeal. It presents a Batman we haven't really seen in any non-comics media since the seventies or so, a life-loving, wise-cracking Bob Haney-style Batman who is nevertheless the ultimate bad-ass, know-it-all detective and obsessed crime fighter we've come to know and love since the mid-eighties or so.

There was a point during the first episode I saw—in which Batman teamed up with Plastic Man to fight Gentleman Ghost, and then crash-landed on Dinosaur Island where Batman got turned into a gorilla, that I wondered if maybe they weren't just making the show just for me. How else to explain the disproportionately large roles given to Plastic Man and Aquaman, two of my favorite superheroes, who aren't exactly at the top of many fans' Favorite Superheroes lists?

That suspicion eventually passed, when I realized how many other folks out there love the show just as much—if not more—than I do.

I haven't been watching it too regularly, as I lack cable and I'm not much of a TV person—90210 and Dancing With The Stars excepted—and I just recently caught up with the second season.

Now I know they weren't making this show for me. Instead, I apparently found a magic lamp at some point during the past few years, and accidentally rubbed it, unbeknowest to me releasing a wish-granting genie. Since I released it unawares and thus didn't actually make a wish, the genie must have read my mind, and then went off to Hollywood, got a job in animation and helped developed Batman: The Brave and The Bold's second season in an effort to duplicate my un-asked for, unconscious desires.

How else to explain a run of episodes that included 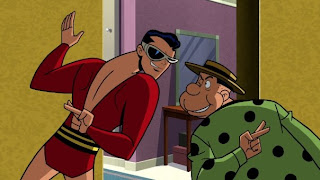 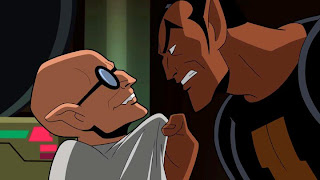 Captain Marvel fighting a Dr. Sivana that looks like he leapt right out of a C.C. Beck comic (oh, and the Sivana kids and Black Adam, too), 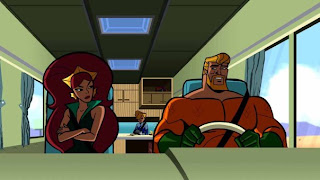 Aquaman packing Mera and a sullen Arthur Jr. (wearing his dad's 1986 miniseries costume!) going on an RV vacation of the surface world, 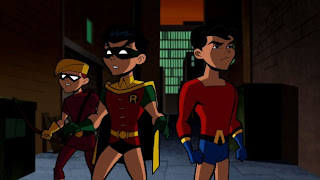 The Teen Titans as little kids, 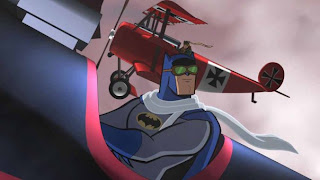 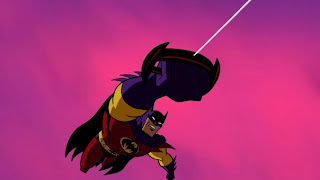 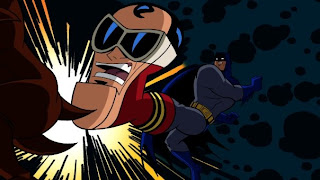 Batman wearing Plastic Man as a giant boot...in order to kick a Bigfoot in the face...in the middle of a fight scene against an entire gang of Bigfoots, 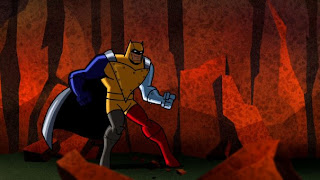 Batman wearing the Metal Men as a Batman costume... 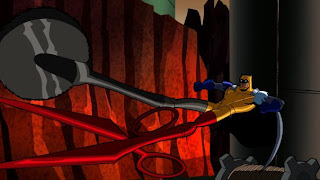 ...allowing him to use their fantastic metallic powers to do battle with their foes, 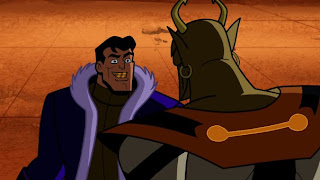 And that's before we even get into in what is perhaps the greatest episode of anything on TV ever, "Death Race to Oblivion," in which someone—probably that genie I was talking about—had the great idea to splice DC super-comics with Wacky Races and Death Race 2000, resulting in an episode in which Mongul eschews the whole forced gladiatorial combat thing for an every person-for-themself road race between various superheroes and supervillans in their various super-vehicles. 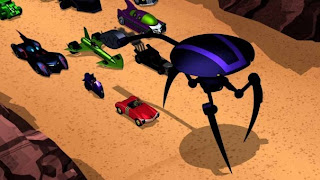 So you've got Batman and Joker in the Batmobile and Jokermobile (respectively), Green Arrow in his Arrow Car, Gentleman Ghost in a souped-up hearse, Steppenwolf in a monstrous polluting tank thing, The Huntress on a purple motorcycle, Black Manta in a big War of the Worlds-looking manta crab walker thing, Green Lantern Guy Gardner in a ring-generated muscle car, 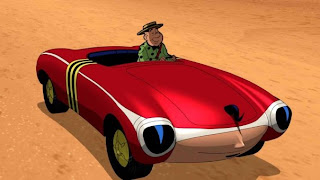 Woozy Winks driving Plastic Man in the form of a race car, 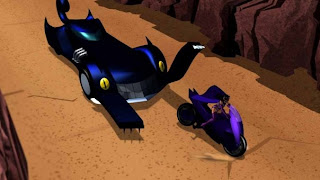 Who wins? Who loses? And how do the heroes defeat Mongul? Well, it involves Batman transforming the Batmobile into a giant robot battle suit and, oh my God, 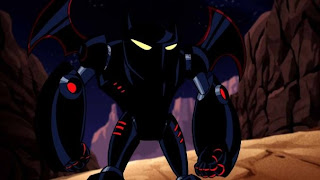 Batman in a Batmobile that is also a Transformer!

Thank you mind-reading, wish-granting genie in the animation industry! Keep up the good work!
Posted by Caleb at 7:41 PM

That Aquaman episode with the vacation is hands down my favorite. It was like an Aquaman team-up show, and it even had that SuperFriends "star-whoosh" sound effect

Remember when the first screenshots leaked and the internets were full of nerds crying out about how it looked to "kiddified" and stuff. You don't see that so much anymore do you?

I really need to get caught up on that show. I watched it faithfully for the first 20 episodes or so, and then I've fallen behind.

I haven't seen a bad episode yet! Or even a mediocre one.

I agree 100% with this entire post. I really can't get enough of this show. I even love the fact that when they show Batman in different time periods he's in the correct costume for that time period.

The comic book based on the series is quite good,too (and funny, but without being silly). It reminds me of the wonderful silver age stories when each issue was made up of self-contained stories with fantastical / sci-fi driven plots and Batman wasn't an angst ridden basket case.

I love how they're able to merge the wacky and the serious elements nearly seamlessly. I was sold with the episode with Christmas getting attacked by Toyman and Toyman simulates a 1950s Martian invasion (or was it Venus? I can't remember) with flying saucers no less! But they also include flashbacks to Bruce Wayne when he was spoiled kid. They make the counterintuitive choice to have him be unsympathetic, then they handle the killing of his parents with real gravity, staging it so we're outside the alley and see two flashes of gunfire, the sound effects, and hear young Wayne yell for his parents. It's one of the better handlings of the killing I can remember.

That they can pack that much into 22 minutes and have it work is incredible.