You know who should draw Aquaman? Kate Beaton. 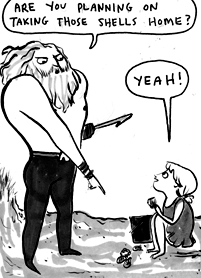 That's the second panel of a recent Aquaman strip the cartoonist posted here.

You'll notice that the Aquaman she draws is the 1990's version, from the Peter David-written volume of Aquaman, with the beard and the harpoon hand. Why that Aquaman? Here's what Beaton wrote under the strip:

As new as I am to learning about superheroes, everything that is well known to everyone else—like the fact that Aquaman is regarded as kind of lame—is new and hilarious. I read a bit about Aquaman growing a beard and having a harpoon hand and living in a cave and talking to spirits or something, and thought, how can anyone not like this guy? This crazy dude living under the water. Anyway that is the only version of Aquaman that I am really into.

I could definitely get into a "crazy dude living under the water" take on Aquaman, especially as drawn by Beaton. She certainly has a way with DC superheroes. If you missed it, here's her Wonder Woman strip from last fall.
Posted by Caleb at 7:22 PM

Kate Beaton is the best. I am hoping she gets round to the whole Justice League at some point... or at least the Super Friends.

I would pay several dollars for a monthly book of Beaton's historical or literature strips. Hell I'd pay for a monthly comic featuring Kate and Child Kate...

Yes, these are better Wonder Woman and Aquaman comics than the bulk of the stuff DC has been publishing with those characters in the last few decades.

Awesome links. Stuff like this AND your own priceless opinions are why I'm beginning to cherish your blog.

Her comic was funny, but in the comments (on her livejournal) we had 95 people make the same "hur hur talks to fishes" joke. That was rough.

Her Wonder Woman is super fantastic though.

But yeah, her Aquaman would be fun, too.