The Best Part of Superman: Doomsday 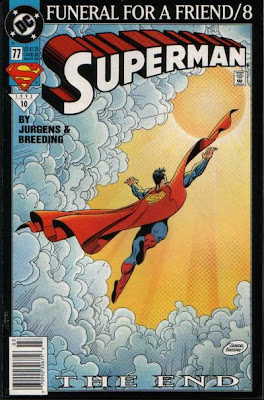 I realize I was pretty hard on DC’s direct-to-DVD Superman: Doomsday film last week. I suppose I should take some of the responsibility for my own disappointment. After all, “direct-to-DVD” translates pretty directly into “not good enough for theaters,” and, well, Jesus, just look at some of the stuff that gets put in theaters. Still, I was expecting something at least as good as JLU, and perhaps that’s my fault for expecting it as much as their fault for failing to deliver it.

I mean, I thought it was pretty funny that the hot Metropolis nightclub Jimmy works as a paparazzo at is called “Nite Club.”

And that animated Kevin Smith is so much skinnier than real-life Kevin Smith.

And, um…I guess it was pretty cool when Superman grabbed Doomsday by the roof of this mouth to flip him.

And…uh…hmm. Well, that’s really about it from the feature presentation, but I did find the special feature documentary about the creation of the original death of Superman storyline from DC Comics quite fascinating.

While the subject matter isn’t the making of the film I had just watched, this short film is of a similar nature to the “making of” featurettes that are so common on DVDs these days, just focusing on something other than the DVD feature.

Certainly it amounts to little more than PR, and if there is a compelling documentary to be made about that time DC Comics killed off their flagship character, DC Comics isn’t really the right company to make it.

Is it a good documentary? God, no.

But is it interesting, and fun to watch? It sure is, particularly for those of us interested in the creation of comic books and the industry as a whole.

Consulting comics.org, I see that was 15 going on 16 when Superman died in late ’92, and I was just starting to get into comics. As that much maligned decade of the comic industry was dawning, the TSR/DC co-production Advanced Dungeons & Dragons and the only extremely occasionally released Eastman and Laird’s Teenage Mutant Ninja Turtles books were the only comics I was regularly reading. But I was starting to feel the siren call of the DCU, thanks to the house ads and checklists that ran in AD&D.

Armageddon 2001 got me to pick up a couple of self-contained annuals featuring Batman, and Norm Breyfogle’s expressive art drew me to an issue of Batman (featuring a ventriloquist’s dummy with a tommy gun, as I recall), and I soon discovered there were scores of Breyfogle-drawn Bat-books in the back issue bins.

The Doomsday storyline would be my first exposure to Superman, beyond the Dan Jurgens Armageddon 2001 annual in which Superman wore gloves and fought Batman, and his brief appearance in the Death In the Family trade I’d bought (which also featured Batman and Superman fighting, come to think of it).

I too got introduced to DC Comics through the Death of Superman. I still look back on the Reign of Superman story with fondness.

Out of curiosity, when did they give Hal Jordan the Reed Richards hair? Did they think they'd attract more fans by making Green Lantern seem like their father? I can't imagine that ever being a good idea.

Captain Marvel, Guy Gardner, and orange-shirted Aquaman together in a Superman story? **starts eBay-ing for it**

Right on. You captured my feelings about the early 90s Superman books, Wizard, and DC Comics' event policies all in one fell swoop.

You deserve a medal.