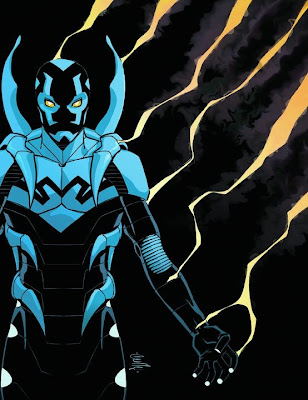 After a few months of hearing everyone on the Internet talking about how awesome DC’s Blue Beetle was, I decided to give the series a third try with Blue Beetle #18, the Teen Titans crossover issue, and as I said here at the time, it was a whole lot of fun. I also reviewed that issue for that week’s installment of Best Shots at Newsarama, asking rhetorically if the series was always that much fun, or if #18 represented some kind of crazy but fortuitous fluke.

The Newsarama posters, as fickle a lot as exists anywhere on the Internet, pretty much unanimously responded that Blue Beetle is indeed a great read month in and month out, particularly after co-writer Keith Giffen left John Rogers to his own devices (something that struck me as odd, as I’ve enjoyed just about everything I’ve ever read with the name “Keith Giffen” attached at least a little bit, up until I tried BB #1 and #7, anyway, neither of which was at all interesting, and all I took away from either was the sense that damn, that’s a neat superhero costume).

Further encouraged, and seeing as the last two weeks were pretty light on new comics, I decided to give a few more Rogers-only back-issues a try.

And now, having done so, I think it’s high time I start reading this book regularly, because it turns out the enjoyability of Rogers’ Blue Beetle is one of the things the Internet is actually right about.

There were only two pre-#18 issues at my local comic shop, so I didn’t actually have much in the way of choice regarding how far back to start. 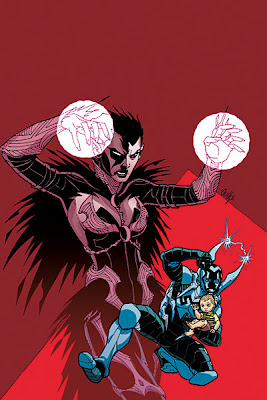 First up was Blue Beetle #16, which, from the cover, appeared to have a perfect storm of Things Caleb Doesn’t Like About The Current DCU.

Not only was there a legacy hero created to replace a hero killed off specifically to be replaced with a legacy hero, but he was apparently going to do battle with my least favorite villain at the moment, the suddenly evil for no reason character from Identity Crisis with the crazy-ass plan that made no sense whatsoever who is now suddenly Eclipso for some reason, but now is immune to sunlight and can’t simply possess people via contact with black diamonds and thoughts of revenge ala Eclipso: The Darkness Within, The Spectre and Eclipso (Why did you make me buy all those annuals if you weren’t going to make any one else read them ten years later, DC?!).

In other words, this is a book that I was primed to hate, and thus easily passed it over when I originally saw it on the shelves two months ago.

And the first page is pretty awful, as Eclipso wanders through a burning building looking at corpses and talking to an unseen victim she’s apparently stalking towards.

How do you hate a story with a title like that?


(If you haven’t read Blue Beetle #16 yet either, I’d recommend you do so. In front of the computer. While the above video plays. It makes for a pleasant soundtrack)

The “rules” of Eclipso still seem off—there’s mention of “her” having been in orbit of the sun, which used to drive Eclipso out of his host bodies, and the plot involves her trying to inhabit a baby because being in a guilt-free body will make her more powerful (Although a baby is, you know, a baby, and they’re not really known for their strength).

She runs afoul of Traci 13, a character I had managed to have never read a story featuring before (save the Day of Judgement Infinite Crisis Special, which was nicely drawn and cameo-tastic, but otherwise nothing special), and I just assumed she was a Jack Hawksmoor knock-off with the worst anti-costume costume ever. (Consulting my DC Comics Encyclopedia I see she’s both the daughter of Dr. Thirteen, which is awesome, and was raised by the Dibnys somewhere along the line, which is also awesome, and is now a freelance magical detective, which is super-awesome. Man, that DC Comics Encyclopedia is an invaluable resource; I think everyone should have one on their bookshelves…especially Tony Bedard).

It turns out she does have some clothes beyond the pair of panties and collared short-sleeve shirt she wears in the IC Special and her Encyclopeida illo and that she’s a pretty neat character, appearing in Jaime and Paco’s presence as soon as they give her a perfect cue.

Together the trio team-up against Eclipsa to save the baby, and, in addition to some sweet teen romance and light-hearted superhero fun, Rogers gives us one great scene, in which Jaime’s deepest, darkest power fantasy is unleashed to battle Paco. (It gets even more hilarious when Paco and Eclipsa challenge the power fantasy for being so tame, and it tries to justify its existence).

Like the Titans team-up, this issue was a highly accessible, highly enjoyable done-in-one, and I loved it despite the presence of one of my greatest sources of irritation in the DCU (Seriously, the only character who bugs me more than Eclipsa is Jason Todd.) 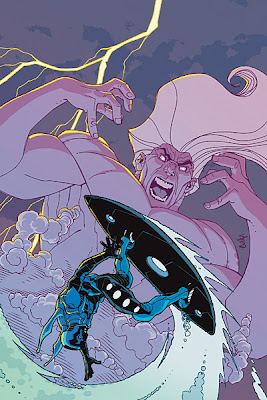 Next up was Blue Beetle #17, in which our young hero struggles against minor villain Typhoon, a “giant naked bad man” who wields storm powers and is threatening the lives of innocent civilians on the coast of Mexico. This ish didn’t have as many big laughs as the last one, but the teen melodrama was stronger (serious without being irritatingly angsty) and Jaime’s running crew of Paco and Brenda get some nice panel-time (As in #18, Brenda gets the best line: “Do not try to conjugate ‘Antonio Banderas’ as a verb.”) Additionally, the presence of Ted Kord is felt in a subtle but effective, and there’s a neat Batman cameo that isn’t really a Batman cameo at all.

So as far as I can see, Rogers and artist Rafael Albuquerque are three for three now. There are five more Giffen-less issues preceding #16 that I’ll need to hunt down yet (although one seems to also be Rogers-less), but as reluctant as I was to embrace the callous replacement of Blue Beetle Ted Kord with a brand-new character, this is definitely a super-comic that begs to be embraced, and rewards one for doing so.
Posted by Caleb at 7:45 PM

She runs afoul of Traci 13, a character I had managed to have never read a story featuring before.

Oh, then you need to keep an eye out for the trade paperback collection of Dr 13: Architecture and Mortality.

I actually thought it was a really great, fun introduction to the character!

I too was a tad on the skeptical side at first, but was one over almost immediately. Do try and find some of the back issues. The one with Guy Gardner which I believe is #14, is both hilarious and touching, and brings in Ted Kord as well.

I'd go so far as to recommend picking up the trades. Seriously, this is one of my favorite titles and a lot of it has to do with something you mentioned - the interaction between Jaime, Paco and Brenda. Plus the stories are fun, they actually make some sort of sense from month to month, and the writing just keeps getting tighter.

True, not every issue is gold, but none of them are crap, either, and it all tends to work toward developing the character and his world. (And yeah, the book picked up a lot of energy once Rogers was on his own).

Oh, then you need to keep an eye out for the trade paperback collection of Dr 13: Architecture and Mortality.

I can not wait for this.

Every time I Tales of The Spectre III (Now With More 100% More Goatee) came out, I would pick it up, flip through it, and then have this huge mental struggle for a few minutes, with a Zauriel on one shoulder and a Neron on the other saying, "Go ahead and buy it, they'll never trade collect just the back ups!" and "No, no, don't pay $2.99 just for the back-up. They might collect it, and if not, it will be in $1 bins at Mid-Ohio Comic Con next fall."

Ultimately I decided to wait it out, and I'm glad I did.