More on blurbs, a last word on Superman: Doomsday

Remember a couple of weeks back when we discussed the unblurbable Wonder Woman story arc Jodi Picoult wrote, the one which DC opted to promote by using a completely neutral blurb that only drew attention to the fact that apparently nobody anywhere said anything remotely positive about it?

Well, it appears that Jeff Smith's recent reimagining of the Captain Marvel franchise didn't have that problem at all. Here's the house ad for that trade of Shazam!: The Monster Society of Evil that DC's been running: 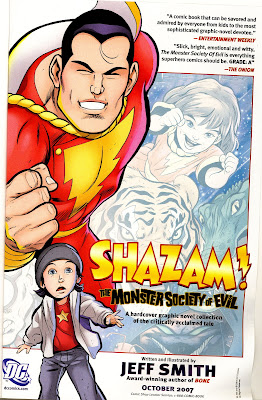 They've got not one but two different blurbs, which is always a good sign, as it means more than one person/venue liked the work, and gives the impression of consensus opinion.

And these are two very good sources for blurbs, each at least as prestigious as Wonder Woman: Love and War's USA Today. I'm not sure what the circulation numbers of the three venues are, or which is the most widely read, but I know Entertainment Weekly and The Onion are both pretty mainstream, and, even if they are less widely read, they're known for their criticism (Or, at least, are known for devoting a great deal of space and resources to criticism).

EW's been doing comics coverage for years now, but the fact that they cover all forms of popular entertainment makes them very much a part of the mainstream media, so to hear them raving about any comic book always has the impression that it's something of a rarity (Just compare the real estate of the magazine devoted to comics versus that devoted to movies, television or music).

And as for The Onion, they're known for being a tough audience, so a good grade from Onion critics carries a little more weight than it might from elsewhere.

As to the content of those blurbs, both make fairly strong arguments that Shazam!: The Monster Society of Evil is a book that ad-readers should seek out.

EW says that it can be be "savored" and "admired," like it was part delicious meal and part Founding Father, and the all-ages nature of the work is incorporated into the line in such a way as to sound positive rather than negative (which is how I feel "all-ages" is too often interpreted by too many comics readers). It's not just kids or prudes who will like it, but "everyone" from kids "to the most sophisticated graphic-novel devotee." The most sophisticated graphic-novel devotee? Hey guys, that's us!

The Onion or, in actuality, The Onion's non-parody AV Club list a string of positives—"slick, bright, emotional and witty"—before calling it "everything superhero comics should be." You don't get much more positive than that.

As for the rest of the ad, it points out that the book is "critically acclaimed" (it is) and that its author is "award-winning" (correct) and the creator of another graphic novel success story that anyone who knows anything about comics has likely heard of, and heard great thngs about.

The only downside of the ad I see is that it goes ahead and spoils the appearance of Mr. Mind, but then, I guess if you haven't read it yet, you wouldn't know that, so maybe it doesn't really spoil it (And the appearance of Mr. Mind wasn't played up so dramatically in Smith's version of the "Monster Society" story as it was in the original anyway).

Moving on to another DC house ad in last week's comics, you may have noticed this: 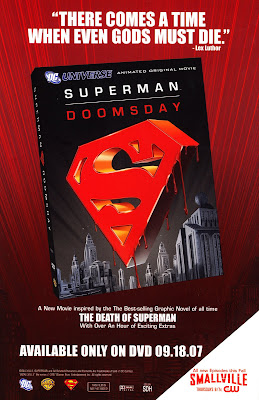 What a weird, weird ad.

The film having been created as a direct-to-DVD release marketed at hardcore fans, I wouldn't be surprised if DC hadn't sent many or even any copies of it to critics (I haven't seen reviews of it run in any non-comics press places, but then, perhaps I'm just not reading the right newspapers/magazines/websites), so perhaps there weren't any reviews available at the time of the release to pull quotes from to run as blurbs in the ad.

But still, why pull a quote from Lex Luthor?

Now, running a non-blurb quote in an ad for something isn't all that unheard of—remember the Oscar Wilde quote that ran in the house ads for Starman, for example?—but quoting a line of dialogue from the work being advertised, and then attributing it to that fictional character? That just seems all kinds of weird to me, and I honestly can't figure out what the fuck it's doing there, or what message it's intended to convey to someone coming across this ad.

I mean, if they thought it was a cool line that totally encapsulates what the story is all about, they could have always just put that phrase on the top of the ad, without the quotes and the attribution. It's not like Lex Luthor is going to sue them for stealing his quote and failing to properly attribute it or anything.

Also, below the image, in randomly capitalized lettering, appear the words "A New Movie inspired by the The Best-selling Graphic Novel of all time THE DEATH OF SUPERMAN." The TV ad made the same claim (only it left out the double "the").

I don't know for a fact that The Death of Superman isn't the best-selling graphic novel of all time, and while I suppose I could poke around the Internet or send some emails in an attempt to find out, I don't have that much interest in the question (or motivation to answer it). But I would just like to point out that the claim seems pretty damn fishy.

Is this really the best-selling graphic novel of all time? Better than Watchmen? And V For Vendetta? And The Dark Knight Returns? And The Sandman: Preludes and Nocturnes? What about, like, Naruto Vol. 1 or Persepolis or the more popular Tintin and Asterix books? I don't know, I'm asking. But if so, I find that pretty damn shocking. Particularly since that material is now available in various larger collections and omnibuses. It seems like its shelf-life is constantly being cut into by different "cuts" of the story, and it would therefore have long ago been eclipsed, whereas people wanting to read Watchmen or Dark Knight Returns are going to keep buying those same versions of the graphic novels.

We could quibble over whether or not The Death of Superman even is a graphic novel* too, I guess, but me, I'm just surprised that that particular collection of that story is really the best-selling gn ever. Certainly if I wanted to read the story for the first time, I'd gravitate toward something like this.

But I guess as far as Western trades go, DC also publishes the most likely contenders** for the top spot, so they'd know if it really was or not.

Of course, they should also know how goofy it is to quote Lex Luthor in an ad, and that someone should really copy-edit the hell out of the ad copy before going to press, too.


*There is a distinction to be made between a trade paperback collection of a serially published comic book story taken from an ongoing—or several ongoings, in this case—and an actual graphic novel intended to be a graphic novel, but the term "graphic novel" is used so indescriminately between the two that arguing about the distinction seems pointless.

**I'm guessing. I don't think Maus, lauded as it is, moves as many books as Dark Knight Returns, and those Jim Lee X-Men were partially driven by the speculation on the value of the singles, and thus I'm assuming the trade collections containing those issues don't do such astronomical numbers. But again, this is just a series of guesses and assumptions
Posted by Caleb at 2:23 PM

Two things: First I guess just to be a jerk it's "sue" not "sew." Although I guess sewing DC Comics and/or Warner Brothers could be some nefarious Luthor plot.

Also, the Death of Superman is only 9.99, pretty cheap for a GN or TPB or whatever you want to call it. I figure those even casually interested in Superman would have picked it up for that price. I'm not saying it is the best selling of all time, but I don't find it that unbelievable.

Man, I just knew if I spent part of a post making fun of DC for a typo, I'd be sure to have a glaring one myself. Thanks for pointing it out though.

(If Luthor sewed shut the covers of all DC comics though, that would be a good evil plot...)

Good point on the price point, too...

I noticed that, too.

The ad copy for the Superman/Doomsday trade calls itself the "best selling DC graphic novel of all time," thus sidestepping any "all time" comparisons.

re: Death of Superman sales... while a two-minute internet search pulled no hard numbers and I'm too busy to waste more time on this, Death's sales numbers are massive.

I don't know the actual numbers, but guesstimate that Watchmen probably sells around an additional 20K copies annually, and has for 20 years.
Death sold some ludicrous million-plus numbers its first year, plus an additional 10-15K every year since then.

So there may be some hyperbole, but probably not as much as you might guess.

The Death of Superman TPB is, after all, the very first comic that I ever bought. (And look what happened to me.)

(whether or not the Death tpb should be considered a "graphic novel" is a different debate.)

The first two trades I bought were Dark Knight Returns and Death of Superman (along with World Without a and Return of), but then I ended up getting Watchmen within my first 20 trades too, so... so yeah, they all sell well? **shrug** I wasn't reading any comics at the time but of course remembered the big commotion his death caused and was very interested in reading it to find out what was up when I saw it in my local comics shop the first day I went there. I can see how Death of Superman would be more appealing to casual fans and people just starting out than things like Watchmen, V for Vendetta, or Sandman.