More (totally anecdotal) evidence against the existence of DC's "Trinity" 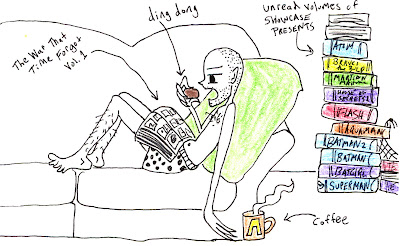 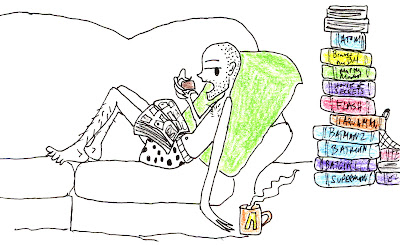 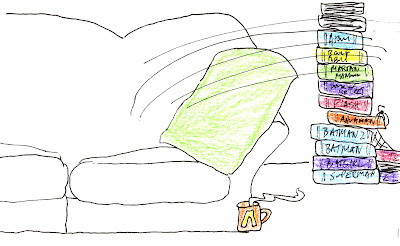 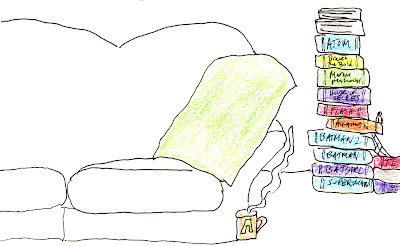 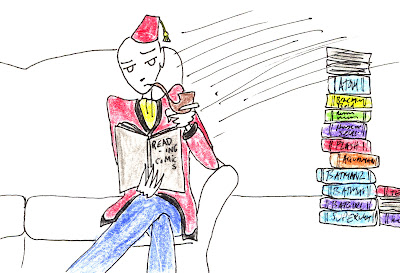 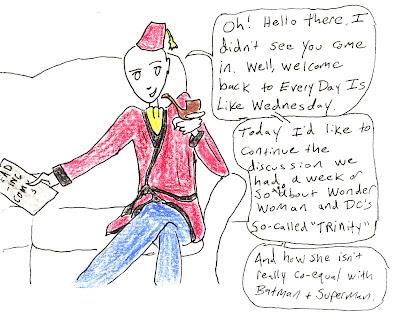 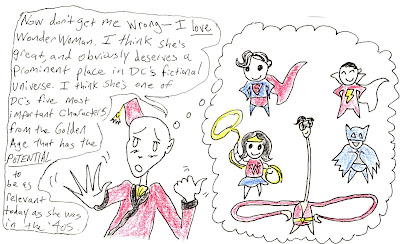 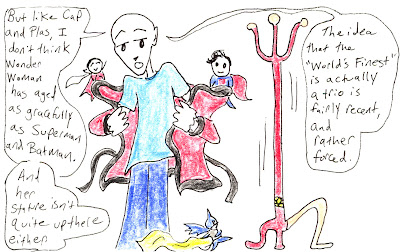 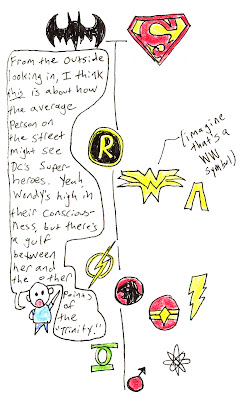 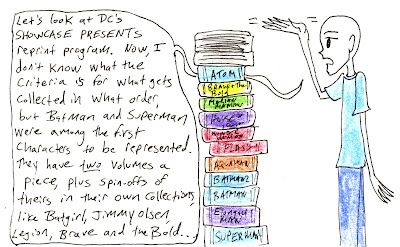 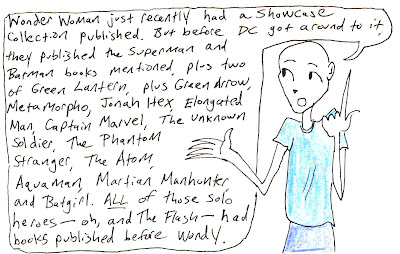 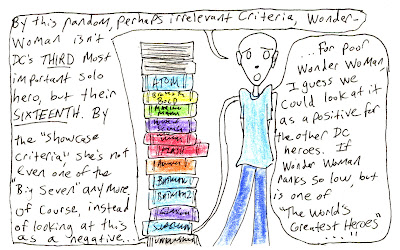 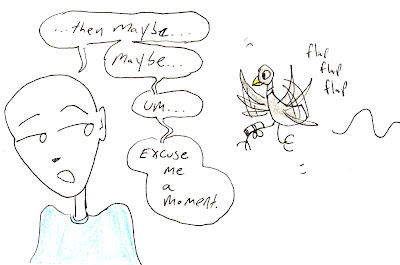 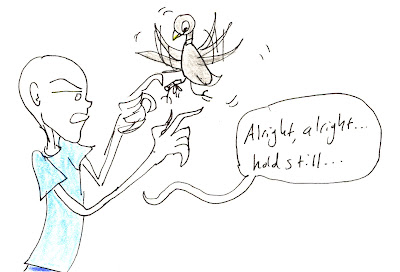 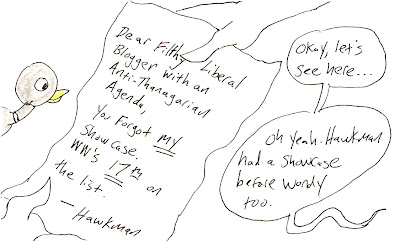 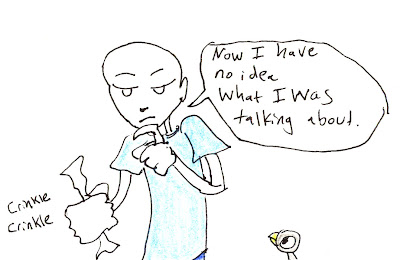 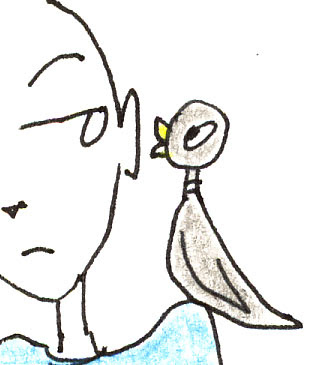 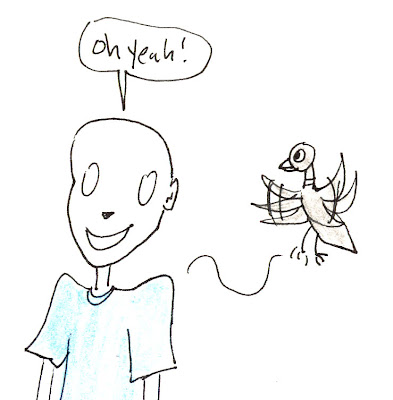 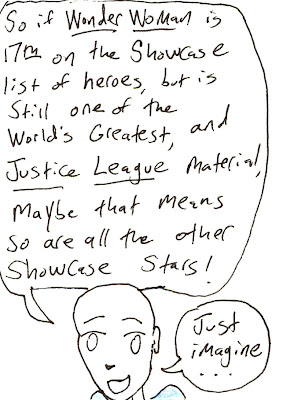 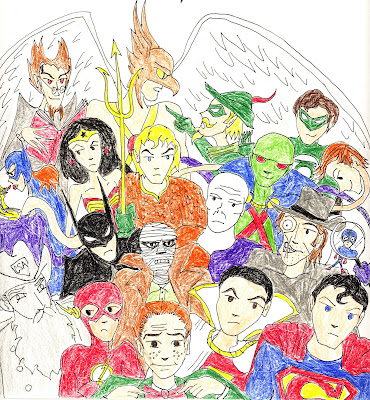 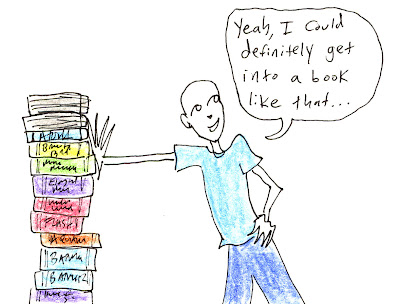 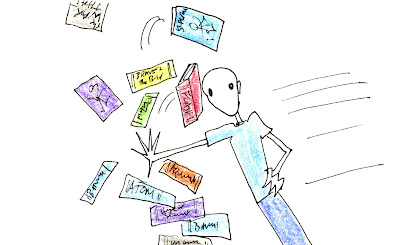 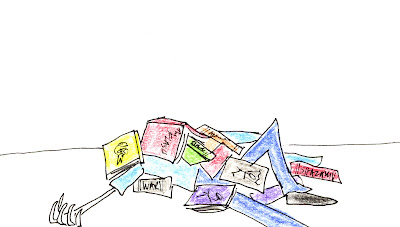 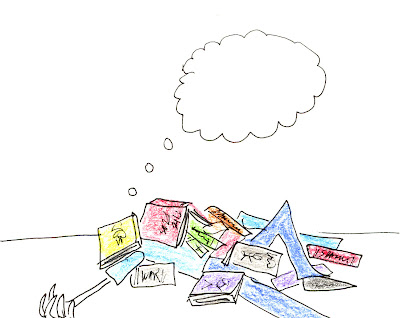 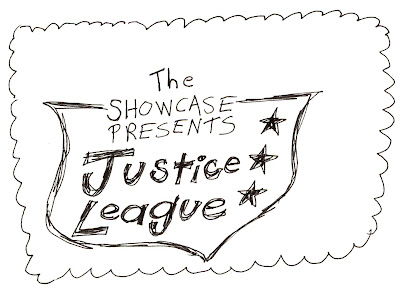 I just want to apologize in advance if my rhetoric here is even less cogent than usual. You know how when people make comics, they usually write scripts, then do it in pencil and then ink and letter the things? Well, I just kind of sketched out the "story" beats on index cards (my new method of ensuring the images are all roughly the same size) and then wrote all the words directly onto the cards with pen.

Which is why the writing might seem worse than usual. And why I had that several-panel bit with the pigeon, as I couldn't go back and just correct the dialogue.

So scripts? Pencils? Great ideas! I'd reccommend them to everyone making any form of sequential art!

I also forgot to put Phantom Stranger on that sin against Kevin Maguire, and messed up the Atom's costume coloring again. Dammit that guy's costume is hard to remember the colors of...

WONDER WOMAN IS THE TRINITY!

Is that the pigeon that tried to drive the bus?

A showcase presents justice league what a good idea....

These posts are great, one of my favourite blogs.

I don't see why you're making a big deal out of the order books were published in. It's a business decision, and I'm sure you've pointed out many times how totally random and bizarre some of DC's business decisions are.

My impression of the "Trinity" was that these are the three heroes which the other heroes look up to. They're the authority figures inside the DC universe. So it doesn't much matter whether Wonder Woman isn't as popular out here as the other two, or whether she doesn't have as many books. She can still be part of a trinity.

Whether I agree or disagree is irrelevant.

Just the way you present it is so damn interesting.

I agree with Mory – I think that all of the heroes look to Supes, Bats & WW as the example of what heroes should be. There was a line in one of the countdown books to Infinite Crisis where Blue Beetle is talking about WW, of course I don’t remember the exact wording, but that everyone is in love with her, that she sees the goodness in everyone. I always imagined that all of the heroes running around the DCU look up to the “Trinity”. That’s why WW is the center spoke in the trinity for me (that and Lynda Carter got me through puberty in the 90’s).

I really don't care about the "trinity", but I DO love that you have Jeb Stuart right up there next to Batman and Superman!

Thanks for all the feedback.

It's kinda the pigeon that wants to drive the bus. I went to go look for art reference for what carrier pigieons look like, and then I stopped when I got into the hallway and found the pigeon book.

If anyone's interested in reading great, funny stories involving a pigeon, I highly reccomend Mo Willems' series of pigeon books (I've only found three of the four so far).

I agree most of the heroes would look up to those three. Well, maybe not Batman. I wonder if he's so damn cool that heroes forgive him for all the "Stay out of my city" business, or just laught it off and are like, "Oh, that Batman...he's so...Batman, you know?" Or if they'd hold a grudge.

I am curious about how the average person on the street in the DCU would regard the heroes. I would think everyone would have loved WW (She's like, Princess Di and Superman rolled into one), but in Rucka's run he kinda set up a conservative push-back against her (I'm sure if she were real, she'd be accused of denigrating the flag by using it as a pair of panties, and trying to turn Americans into lesbians and pagans).

And lately they've been advancing this story demonizing her in the DCU public eye, what with the televised murder and now the Amazons Attacking business.

I don’t think that DC has demonized WW, not really – we all know that she killed Max Lord because he was using mind control against Superman. In universe, I can kind of understand – I mean, she did kill a man on television; but she was cleared by both The Hague (I think) and the US courts. Also, I think people in universe would have a good grasp on WW – correct me if I’m wrong, but she has always been a good guy in that she’s never been outright evil. I do feel a little uncertain about the aftermath of Amazons Attack – only because I was really hoping that the big red reset button would be pushed and those six issues would be erased from the DCU. It’s not that they were awful, but so much happened – the destruction of Washington DC mainly – how the hell long are they going to be dealing with that?

That was a great line up shot, even with all the love B-Z list characters are getting these days, I don't see anybody willing to be THAT wacky. That would be some great inter-team dynamics right there.

I don't see where you're going with this.

It's pretty obvious that Wonder Woman's not totally accepted as part of the Trinity yet. That's why they need to give her a "push." I don't think that's anything that needs to be proven.

I think the real questions are A) whether she should be part of a Trinity and B) whether the push will work.

I personally don't mind her being part of a Trinity, and I think she has enough Q-rating that it *could* work.

That big group shot is one of your best pics yet.