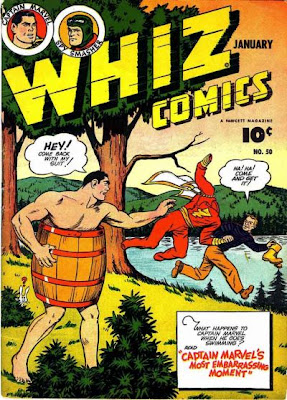 What Happens To Captain Marvel When He Goes Swimming?

Well, I don't know, Mr. White Box In The Corner, but I bet someone steals his costume and then dares him to come and get it (Either because he's confident Captain Marvel won't drop his barrel and come and get it, or because he thinks he will, and the guy just really wants to see Captain Marvel Junior. Er, the metaphorical one, not the kid in blue). Of course, since Captain Marvel can fly, and doesn't really need his legs to run really fast with (I've never tried running while holding a barrel around myself, but I'm assuming it's pretty hard to do), I'm not sure what that clothes-stealing pervert is so happy about...can't Cap just fly after him and headbutt him into unconsciousness?

That is just one of many of the questions this cover raises for anyone who spends too long thinking about it.

For example, is that really Captain Marvel's most embarrassing moment, as our friend Mr. White Box In The Corner tells us? I mean, it's not like any clothes theives or woodland creatures saw his shame. There was a barrel right there to cover him.

Speaking of which, why is there a barrel with no bottom out there in the woods, anyway? That's kind of convenient, isn't it? Is this a popular swimming hole that is often targeted by clothes theives, and the barrel is left there for just this situation?

And why was Captain Marvel swimming in the nude, anyway? Doesn't he have a bathing suit? Or at least a pair of underwear he can use as a bathing suit?

And does this mean Cap doesn't wear underwear under his uniform? Or socks? Because the theif has his suit and boots, but I don't see any boxers or socks in his hands.

And how does Cap take off his uniform, anyway? I take it it's a one piece? I know he has buttons on the torso of the suit, and thus, unlike a lot of superheroes, his costume seemed to be made out of actual cloth instead of, like, body paint (note the boot seams too). But the top's not unbuttoned, and the sash isn't even undone...did Cap just wriggle out of the neck hole when undressing?

And why doesn't Cap just say "Shazam," and revert to a fully clothed Billy, then say "Shazam" again and become a fully-dressed Captain Marvel? That's how it usually works (If his suit is damaged, for example, the magic lightning fixes it up during the transformation). This cover seems to imply, however, that when the lightning strikes, it just turns Billy's clothes into Captain Marvel's, and vice versa. Which would explain his reticence to use his magic word in this situation.

And I'm no botantist, but that plant in the foreground looks awfully familiar, doesn't it?

And, perhaps most importantly, hasn't that rabbit ever seen a naked guy in a barrel in the woods before? Why's it so confused?

The look on this rabbit's face, coupled with the giant red question mark above it's head, are what I think pushes this over the top; this isn't just a great Captain Marvel cover, but one of the greatest.
Posted by Caleb at 4:54 PM

I must admit, that I am wondering where the barrel came from. It's presence does seem rather fortuitous.

And there's still another question: why does he go swimming as Captain Marvel, instead of going as Billy Batson?!

Can you imagine Batman doing such a thing?

Maybe he removed his suit so he could take a whiz.