I read some manga. 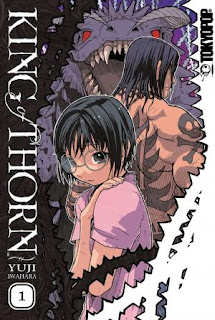 King of Thorn Vol. 1 (Tokyopop) A few days after mentioning the YALSA list of “Top Graphic Novels for Teens” in a post, I was able to track down one of the manga that made the list, King of Thorn.

It wasn’t what I was expecting at all.

It’s a fine action-adventure manga, with nice, easily readable art, cool character designs and a serviceable melodrama about a shy young girl finding the courage to live her life at its heart, but it’s nothing out of the ordinary. It’s simply a baseline manga series and, unlike The Magical Life of Long Tack Sam, Laika and some of the other books on their top ten, I’m really not sure what it’s doing on this list at all.

This page has a longer YALSA list, going under the name of “Great Graphic Novels For Teens,” with a sentence or two of commentary and a bit on the criteria. As far as I can tell, it seems to be the list is composed of books that are popular and encompass the full range of teen graphic novels (a lot of manga, some superhero books, some fantasy, some Minx, some pleasant surprises like Robot Dreams, Houdini: The Handcuff King and Notes for a War Story).

I wouldn’t put too much stock in the list, as it does credit the Sam Kieth-created Batman series Secrets to “Sam Kieth, Bob Kane and others.”

At any rate, it got me to read the first volume of King of Thorn, which was an inoffensively told genre story that I didn’t mind killing an hour or so reading, and, by the time I reached the last page, I was intrigued enough by the central mystery to want to check out future volumes (From a library, if not from a bookstore at $9.99 a pop…or my local comic shop for $9.99 minus my pull-list discount).

In the near future, a horrible, deadly, incurable disease nicknamed Medusa is ravaging the world’s population. It gets its name from the manner in which it kills people, practically petrifying them until they crumble like an old statue.

An eccentric aristocrat has financed the building of a huge research center inside an old castle, outfitting it with cryogenics chambers for infectees chosen by lottery.

They’re to be frozen and eventually awoken once the cure is found. When they are awoken, it's seemingly by accident, and it’s certainly not by doctors ready to give them a cure. Instead, they find the castle in ruins, completely covered in thorns (an allusion to the old Sleeping Beauty story), and patrolled by monsters.

How long have they been asleep? Long enough for nature to evolve bird-sized dragons, horned velociraptor-looking dinosaurs, and a huge, eye-less beast that can eat a dozen people in a single gulp, apparently.

Our protagonist is Kasumi, a shy, bespectacled twin who was separated from her sister, and seems to long to join her in death, but images of her sister keep her going. The other survivors are so thoroughly generic they seem pilfered from a Hollywood screenwriter’s notebook. There’s a mysterious stranger covered with tattoos; a fat, old, rich, contrarian senator; a big black dude for fisticuffs; a smart, little white guy with glasses; a motherly young woman whose not long for this world; and a little boy to cry in fear or say something encouraging, depending on the situation.

Together this ragtag group of survivors have to find their way out of the thorn-filled castle, avoid all the monsters and figure out what the hell happened while they were out. Adding tension is the fact that they’re all still dying of the disease they were dying from when they went to sleep, and they’re wearing wristbands that indicate exactly how close to death they all are.

Despite the generic nature of the characters—seemingly more generic in that they are Hollywood stereotypes more than manga stereotypes, making them less exotic to cynical Western readers like me—Yuji Iwahara’s narrative is definitely full of suspense, and rather deftly raises mysteries within mysteries, so that new questions arise while one reads.

While I don’t think this belongs on anyone’s top ten list, if YALSA was just going by popularity among teen readers, then I can see why this made it there. As a jaded 30-year-old, I found it engaging enough; I imagine I would have loved it when I was a teen. I mean, the horned raptor monsters are really, really cool-looking.

A second volume has already been published, and it looks like a third is due any day now. 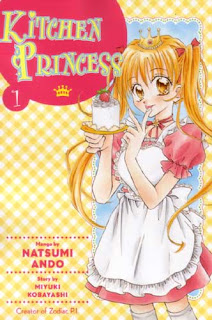 Kitchen Princess Vol. 1 (Del Rey) The credits for this book confuse me. They read “Manga by Natsumi Ando” and “Story by Miyuki Kobayashi.” I don’t know what that means; is the former the artist and the latter the writer? Ando does the little biographic pieces in the borders of each chapter, like Yû Watase and others do in their manga, and an afterword from Kobayashi mentions that Kobayashi writes for a series of Japanese YA books, so I think that’s the right division, but the who does what on this book kinda confuses me, and I hate that.

I’m pretty far behind on this series, an impulse borrow from the library, as I see it apparently began last spring and is already up to four volumes. There were a lot of elements to the story that seemed pretty derivative of other manga I’ve read, so I doubt it’s a series I’ll make a point of following, but it’s pleasant enough, and I found myself pretty disappointed when I got to the end of the book and realized I had reached it already.

Our heroine is the orphan Najika, who has just been accepted to Seika Academy, an exclusive boarding school that she was only able to get into due to her wizardry in the kitchen. She’s in a special class, in which everyone has an exceptional talent in a different field—hers is cooking.

She became such a good cook, in part, due to a mysterious childhood memory. Crying over the loss of her pastry chef parents, she’s rescued from drowning by an older boy, who gives her a dessert he’s carrying to cheer her up. Her only clue as to the boy’s identity is the silver spoon that was in the dessert, which came from…Seika Academy!

Well, that and her memory of the taste of the flan. Najika never forgets a taste.

Already we’ve got a bit of a Cinderella story going on, and the search for her destined love she only cloudily remembers, as in Love Hina (and probably other manga, but that’s my favorite to use that particular conceit).

At the academy, she meets moody Daichi and his popular older brother Sora, the two prime suspects for princehood. They befriend her, but the rest of the student body isn’t so kind, particularly the Mean Girls-style Queen Bee model Akane. I really liked this last character, because while she’s thoroughly evil, she’s deviously so, and her evil isn’t telegraphed in the way bad guy characters usually are presented—we’re as shocked as Najika at Akane’s cruelty. (Well, I was; you won’t be if you read it now, because I’ve spoiled it. Sorry).

This first volume chronicles Najika’s first semester at the school, her difficulties with the other girls, and the gentle flirtations with the two brothers, and the mysteries of the series, like who her prince is and why Sora and Daichi are no longer as close as one would expect brothers to be.

Also included are recipes of all the foods Najika whips up in the book, which is kinda neat. Unfortunately, my being mostly vegan will prevent me from trying to make any of these except possibly the Christmas cookie recipe, which actually doesn’t sound all that great anyway, but, had I read this, like, a decade ago, I would have been all over this section.

Otherwise, it’s pretty much your standard manga high school dramedy, with some cooking thrown in, and a few surprisingly touching words of wisdom (translated by Satsuki Yamashita and adapted by Nunzio DeFilippis and Christinia Weir).

At one point, Najika is crying about the latest act of cruelty, and wishing she could move back to her hometown of Hokkaido, where the night sky is so much clearer.

Sora tells her, “You know, small stars, large stars…they shine equally bright in the night sky. I don’t think you need to be the same as [the other girls]. You have… …your own way of shining.”

Also, early on, the mysterious Flan Prince tells Najika that “When you eat something good, you smile,” and we learn that informs her philosophy of cooking—the greatest pleasure in cooking is seeing the smile on the face of the person who eats and enjoys your cooking.

It’s not quite as elegant as the bit in Raymond Carver’s short story “A Small, Good Thing” wherein the baker explains the importance of food to the mourning parents—which is the story I always think of when it comes to food philosophy—but it’s not bad from such a frivolous little story.

Come to think of it, a two “Awww!”-inducing book with nice enough art, entertaining enough storylines and recipes in the back might be something worth following into future volumes after all…
Posted by Caleb at 2:46 PM

It's not based on popularity. If it was, the manga in the young adult list would be Full Metal Alchemist, Death Note, Bleach, Fruits Basket.

If it was based on critical response, it'd probably go Monster, Death Note, Beck, Yotsuba&!

So my only guess is that its like one of those Who's Who lists where the publishers pay to get their titles listed. That or the judging panel is small and has extreme favoritism.

Nice. I will link to this article. take a look at ICanFreelance.com for any contract law you need.