Yesterday we took a look at some of the many looks J'onn J'onnz has sported over the years, which, due to his ability to change his shape, tended to be a lot more dramatic than the changes that, say, Batman and Wonder Woman have made to their looks over the years.

But I saved what I regard as J'onn's very best look until today. Here's a hint, its one of those in Mister Bones' monitors on the cover of this comic: 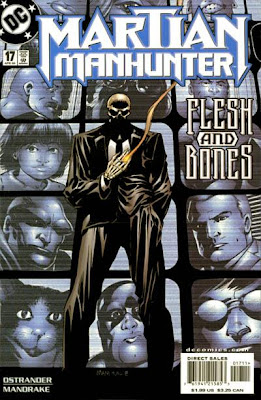 That's the cover of 2000's Martian Manhunter #17, from the ultimate Martian Manhunter team of John Ostrander and Tom Mandrake. This was a single-issue story, one that sort of crossed over with Chase, as it prominently featured the star of that series, plus Bones and the D.E.O. It also explored J'onn's then recent habit of assuming mutliple identities both to better fight crime and to better understand the human race that his destiny was now inextricably linked to.

The plot revolved around Bones trying to strongarm J'onn into working for the D.E.O., where the Manhunter's mental abilities and stealth capabilities would make him the ultimate spy. When J'onn refuses to narc on his fellow heroes, Bones plays hardball. In effect, roll over, or we'll out you in all your various identites.

The book opens with J'onn in perhaps his most unusual identity: 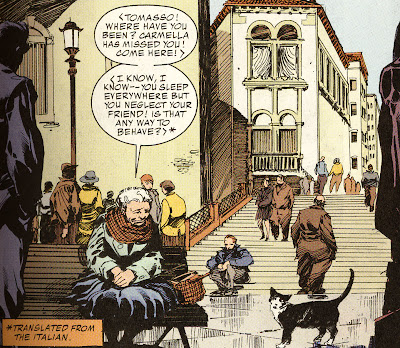 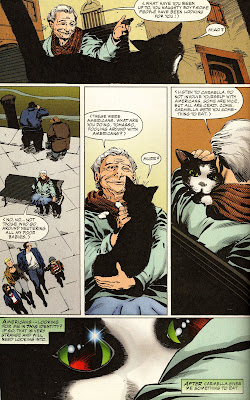 Yes, in addition to being a Denver-based private eye, a Brazilian street urchin and a Japanese businessman, J'onn is also a cat. I love this particular scene, not only because of what's in it explicitly, but because of the events that it references. Apparently Americans were asking around about that particular cat. I love the image of two Men In Black-types approaching old Italian ladies and saying "Excuse me ma'am, but have you seen a small black and white cat with green eyes? Answers to the name Tomasso?"

Bones assigns the task of outing J'onnz to Chase, and she complies, but she leaves a few of J'onn's identities uncompromised, since she doesn't completely agree with Bones (and because of J'onn's friendship with her father). The issue ends with J'onn touching base with his elderly friend Carmela, and here again a neat scene is implied, in which someone tries to convince her that the stray cat she feeds is actually a Martian superhero. That's gotta sound weird, even in the DCU: 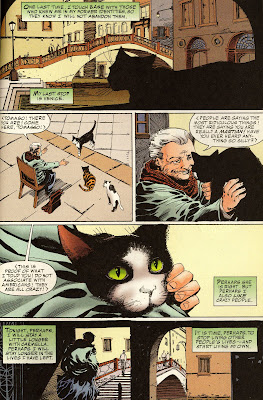 How did they find out he was a cat, exactly? He can turn invisible and intangible and then fly away at superspeed, so it's not like they followed him or put a bug on him or anything...

There's also a JLA one-shot where most of the Morrison League swaps bodies, and J'onn ends up as Aquaman. He starts freaking out about being stuck in one form, until Zauriel calms him down by reminding him that he once spent eight months living as a gorilla. I like the way J'onn is always off doing something weird, but not messing with his friends the way Superman does.

hee. I was pretty sure this was what you were leadin gup to in the prior post.

Man, was the Ostrander-Mandrake series good-- best development of J'onn, ever, by miles.

Ditto, Jacob. Tomasso is a great identity, and Ostrander/Mandrake turned out a great series during their Martian Manhunter run.

It's cute, but it's also silly - seems more like a Silver Age-style twist.

He still needs a new name. It's like instead of the Flash, everyone called him "The Scarlet Speedster" or instead of Green Arrow, "The Emerald Archer," or Ghost Rider, "The Spirit of Vengeance." Yeah, those titles make them sound cool, but they're more formal and aren't as catchy or memorable as "Flash," "Green Arrow," and "Ghost Rider."