Why is it so hard to keep a Mister Miracle series going? 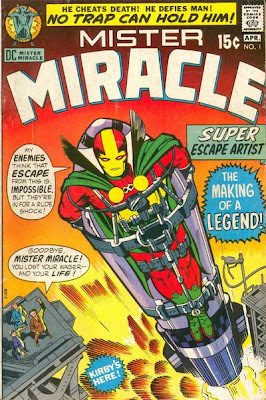 In 1971, Jack Kirby launched Mister Miracle, a comic starring the titlular character of his own creation, as part of the legendary creator's ambitious Fourth World mini-line at DC. It lasted just 25 issues, the last handful of issues coming courtesy of other creators (Steve Englehart, Marshall Rogers, Stever Gerber, Michael Golden and others).

In 1989, DC tried again with a second Mister Miracle monthly, this one more in keeping with the humorous heroics spirit of the character's adventures with the Justice League of the time. Justice League writer J.M. DeMatteis was joined by artist Ian Gibson for this take on the character, and their effort lasted slightly longer. It made it to 28 issues, with Dough Moench and Joe Phillps dragging it to the finish line, before cancellation.

In 1996, DC tried it a third time. Writer Kevin Dooley and penciller Steve Crespo kept this one going for just seven issues, so I guess it must have been cancelled around the time the second or third issue hit the stands.

Mister Miracle has been involved in most of the New Gods and Fourth World-related stories since, and a lot of the Justice League stories and various crises, but 28 issues remains the record for a solo ongoing.

I've never understood why it's been so hard to keep a book starring the character going, beyond the obvious reason that people who aren't Jack Kirby often have difficulty making a Kirby character work for long.

I mean, Mister Miracle is a super escape artist (Look, it says so right there on the cover of the first issue of his first series). That means he has the same vocation as Superman, Batman, Spider-Man and Wolverine. Except that in his day job, instead of being a newspaper reporter, or idle millionaire playboy, or part-time photographer or surly Canadian drifter, he's an escape artist. And not just any escape artist, but the kind who wriggles out of handcuffs while chained to missles. He's one-part Evil Knievel, one-part Houdini. 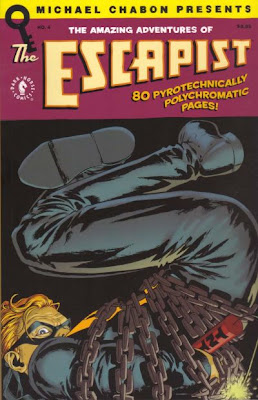 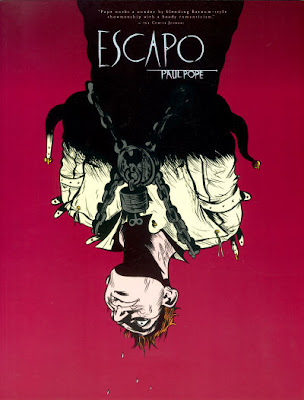 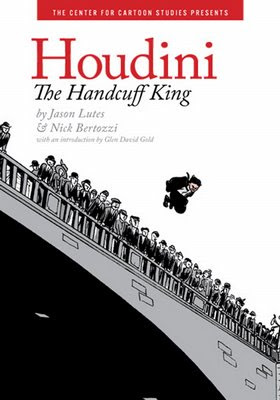 tend to be totally awesome.

So why isn't there a totally awesome Mister Miracle ongoing monthly at the moment?
Posted by Caleb at 8:35 PM

1) He's about to die in death of the new gods

2) He feels anachronistic in a super universe, especially when his primary enemy can beat up Superman, and he's fairly non-violent prior to that really bad mini mentioned above.

1). New Gods who aren't Big Barda or Darkseid or a Female Fury tend to be boring as hell.

1) Many of his escapes involved outrageous cheats, especially in the form of the ultimate deus ex machina, Mother Box. It's exciting to read about a normal human using wits and physical skill to make an escape. It's another to read about a god using Super-Kirby technology to shunt into hyper-space or "magically" open the unopenable locks.

It's the same reason why watching a normal human climb Everest is thrilling, but seeing someone do it using levitating discs or teleportation is boring and off-putting. The successful escape artist titles you cite were all normal humans using normal human means.

2)To spin off of regault's point, it's not like Mister Miracle is the only DC Kirby creation that never caught the public's fancy, and never sold well. New Gods series have never done well.

3)Mr. Miracle is a really stupid name. Sorry, it had to be said.

Though I love the guy, I think nobody outside of Kirby really knows what to do with him. Orion is more or less at the center of the Fourth World mythos, the protector of New Genesis, Darkseid's son, Kalibak's half-brother, a warrior without peer whose destiny demands that he face Darkseid ultimately. He's got plenty of built-in drama.

Mister Miracle is the conscientious objector, a guy who essentially tries to avoid being part of the greater drama of the Fourth World. That he can't get away from his origins is part of his appeal, and a nice contrast to his "escape artist" status, but I think most people (creators and fans) are perplexed by a guy who'd be just as happy to avoid conflict as go out and thrash the villains.
(hence regault's "boring as hell" comment - the list of violent New Gods are implied as not boring)

No it's not. It's one step away from Mister Fairy Pants.

Don't hate. Mister Miracle is an awesome name, plus he chose it as his stage name anyway. It's meant to be a little flamboyant. That said, I've only really read the Kirby run and that always killed me. The whole Mother Box helped him escape, with all of the great escapes off-panel and unexplained.

And, don't forget that Y:The Last Man stars an escape artist, too!

Mister Miracle is an awesome name! It says the same thing as "Superman," just in a more alliterative way.

I can see why some would see it as silly though--there's a goofy charm to Kirby's Fourth World stuff that you either find, um, charming or you think is stupid. God knows how many times I've had conversations that start with people saying, "Wait, the bad guy's name is DARKSIDE? And his planet is APOCALYPSE?"

And that's before we even get to the fact that death itself is cross country skiing...

I dig a superhero whose name has some style and flamboyance, and in this case, it's perfectly in fitting with his persona. He's a professional escape artist, and he's gotta sell it with a fancy name that gets to the gist of what he can do. And he does miracles.

I do wish that we saw a few more escapes that were less Mother Box-aided. I'll grant that point.

I think you guys are way too enamored with these characters to look at things objectively. What would the average person think of the name "Mister Miracle"? It's hokey (and it's also hokey BECAUSE it's alliterative). It sounds like Captain Planet or Devil Dinosaur or Absorbancy Boy. It's silly.

Does that mean the character's less cool? No, but it means people will be less likely to give it a chance. It doesn't say anything about the character, and if you think about a guy who can perform miracles, it makes him seem even more boring because it suggests a lack of danger and suspense.

I love Mr. Miracle, but I don't like the escapes, if that makes sense. Too often they're blah blah Mother Box blah hidden laser blah levitating jockstrap. Besides, I'm too used now to having him in the Justice League, where he's packed in with something I was already enjoying; as opposed to buying him separately.